Lanett takes care of Fayetteville 30-4, moves to 2-0 in region play 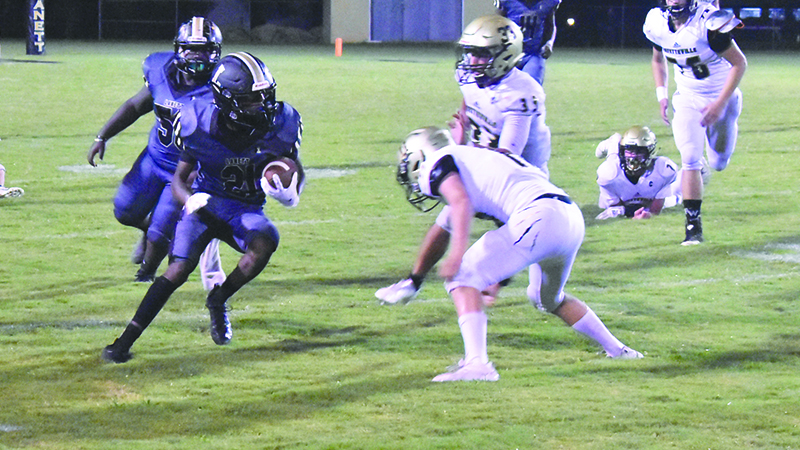 The No. 5 Lanett Panthers started off slow in their 30-4 win against region opponent Fayetteville on Friday night.

“We started out really flat for some reason,” Lanett head coach Clifford Story said. “They have it in their head, that when they have Lanett across their chest, they can just relax. They don’t understand that you’re going to get each team’s best week in and week out. Once I can get them to understand that you can’t just flip the light switch on, we’ll be fine.”

Fayetteville was able to control the game from a time-management standpoint for most of the entire game, as its running attack took up a majority of the game clock. In the first quarter, Lanett only ran one play, while it only ran seven plays in the third quarter.

“They had a good gameplan. I knew they were going to try and control the ball and give themselves an opportunity to keep the ball out of our hands. We were able to get in a little bit better grove as the game went on.”

The Wolves scored the only points of the first quarter.

On the opening possession of the game, the Wolves marched downfield to the Panthers’ 35-yard line. They used a major running attack that included a 19-yard run on a fake punt. From the 35-yard line, they punted the ball to the Lanett 10-yard line.

On the very next play, an errant snap landed in the end zone, which quarterback K.K. Atkinson dove on top of, saving a touchdown but allowing a safety.

With about 9:40 left in the first half, the Panthers forced a punt on the Wolves’ second possession of the game.

Senior Kadarius Zachery caught the punt on his own 40-yard line and charged down the right side of the field to the Wolves 35.

On the ensuing play, D’Quez Madden sprinted ahead 35-yards to give the Panthers a 6-2 game.

A little more than four minutes later, Madden barreled his way through the Wolves’ defense, scoring from 10 yards out. The Panthers went ahead 14-2 when the Panthers converted the two-point conversion.

Instead of kicking it deep, the Wolves kicked an onside kick and recovered the ball to start the third quarter. They started on the Lanett 43-yard line and ran more than 15 plays before getting stuffed on a fourth-and-goal at the Lanett three-yard line.

After an incomplete pass, the Wolves charged through the middle of the Panthers’ offensive line for a safety.

The Panthers’ defense once again was tasked with slowing the running attack of the Wolves, and it came through again, as Seidrion Langston forced a fumble, which was recovered by Makel Patrick.

“They put it in week in and week out,” Story said of his defense. “They take pride in defense. They call themselves the Black Bandits. We had a good defensive gameplan.”

With time running down in the quarter, the Panthers offense finally had an opportunity to get to work. They drove 58 yards in about a minute and a half before Atkinson hit Tra Abner on a bubble screen on the right side of the field. Abner took the ball at the 30 and outran the Wolves secondary down the sideline for a touchdown.

With just under seven minutes to play, Zachery lofted a pass to Langston along the right sideline for the game’s final score.

Lanett is now 2-0 in their region. For their fifth game of the season, the Panthers travel to LaFayette to take on the Bulldogs.