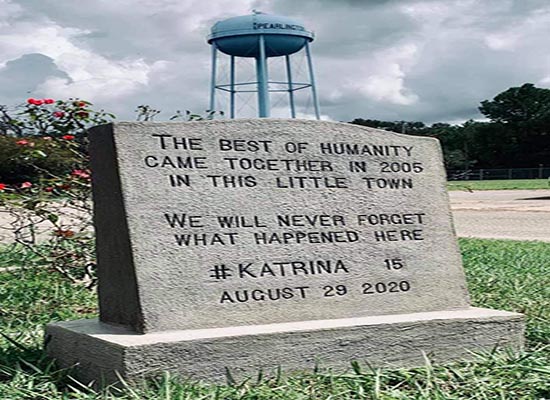 Hurricane Katrina was the fifth deadliest hurricane in the nation to date, claiming the lives of over 1,800 people.

Tens of thousands of people were displaced due to the historic flooding due to poorly constructed levees.

Many of us know people who found refuge in our community either temporarily or made the decision to remain here after losing most of their belongings.

The eye of Katrina made landfall in a small town along the Pearl River in Mississippi, aptly named Pearlington.

In Pearlington, a ceremony was held commemorating the devasting event that severely altered life in the small town.

During that ceremony, a cement marker was unveiled to forever memorialize what took place on Aug. 29, 2005. The origin of that marker begins right here in Chambers County.

Lanett resident Tonya Scroggins was approached by Warren Tidwell, volunteer coordinator with the Hometown Organizing Project to create a monument that would be suitable to display in the tiny town.

We talk about the never-ending generosity of the Chambers County community and yet again that generosity shines through.

Scroggins never hesitated when approached by Tidwell and created the 160-pound marker in about a week and a half.

That marker was delivered by Tidwell this weekend, and we hope the residents in Pearlington appreciate the gesture brought to them all the way from Chambers County.

If you have not read the story we published Saturday on the marker, we encourage you to do so.