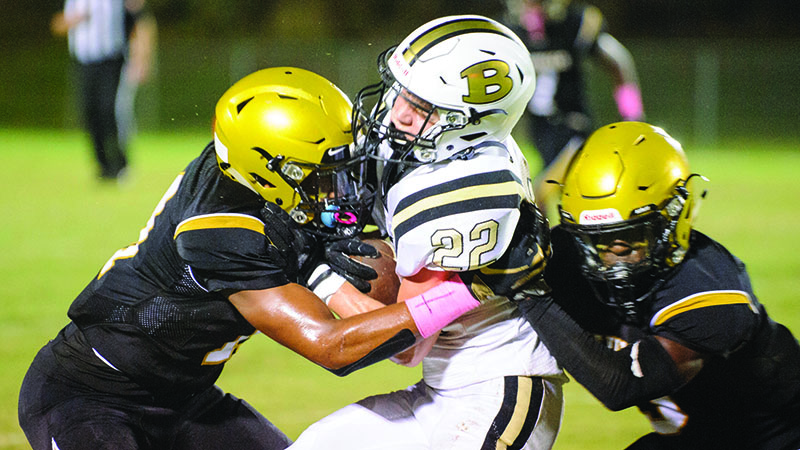 A good defense makes a team great. So do special teams.

Dadeville took advantage of both to go ahead 20-0 over Beulah with 9:30 on the clock in the first quarter before the Tiger offense ever stepped a foot on the field in an eventual 41-0 shutout.

“We just kept making plays,” Dadeville coach Roger McDonald said. “I said, ‘Heck, we are not even going to have to go on the field on offense.’ Anytime your special teams and defense can make plays, that’s big.”

The Beulah Bobcats mustered 4 yards on three plays in the first series before punting, kicking off the excitement for the Tigers. Dadeville’s Philstavious Dowdell returned the kick 55 yards for the score. On the Bobcats’ next drive, Javuntae Holley intercepted Beulah’s Kaleb Abney for a 55-yard pick-six. Not to be outdone, Dowdell intercepted Abney again on the Bobcats’ third drive for another 55-yard pick-six and the Tiger offense was still on the sidelines with a three-score lead.

Pressuring Abney was the Tiger game plan all week.

“We really sold out to stop him, and it worked,” McDonald said.

At the end of the game, the Tigers held Abney to 4-7 passing for 30 yards. Abney also ran the ball 15 times for 40 yards. The two interceptions were the only mark against Abney.

But the Tigers were not finished with the big plays. To close out the first half, Dadeville quarterback Lane Smith found tight end Avontae Wilson down the middle for a 50-yard passing touchdown. The Tigers went into the locker room up 34-0.

But Dowdell decided he wasn’t done coming out of the locker room at the half, taking the second-half kickoff 80 yards for the score again. The return was the last score of the game. At the buzzer, the Tigers won, 41-0. The Tigers were aided by Christian Nelson who ran the ball eight times for 24 yards including a 6-yard touchdown run with 10:37 to go in the second quarter. Smith threw five passes completing three for 83 yards including the 50-yard touchdown toss to Wilson.

The Dadeville defense was able to hold the Bobcat offense to 135 yards. Beulah’s T.J. Washington ran the ball 16 times against the Tiger defense for 40 yards. Two of Abney’s passes found Thet Morris for 24 yards.

The win puts Dadeville in a position it hasn’t seen in years.

“My first year and this win solidifies a winning season for the first since 2014,” McDonald said. “This win makes it the first time being in the playoffs since 2015.”

McDonald took time to celebrate with his team after the win and said this win is special.

“Coach Foster, my defensive coordinator, he is quarantined right now,” McDonald said. “The kids played for him not being here. They have uplifted everybody every game. I’m just as proud as I can be of them.”

McDonald said it looks like the Tigers will be a No. 4 seed traveling to T.R. Miller in the first round of the playoffs but first Dadeville travels to Sylacauga to take on B.B. Comer Thursday. But the easy wins for the Tigers are done for this season.

“They are all tough from here on in but our kids believe; they believe they are supposed to win every time they go on the field,” McDonald said.

A winning season for the first time in five years is reason enough to celebrate, but McDonald is even prouder of his team for fighting through adversity this season.

“These kids have been through a lot,” McDonald said. “We have been through two games this season and we didn’t have a senior playing because of the quarantine and injuries. I am just as proud as I can be of the players and the coaches.”