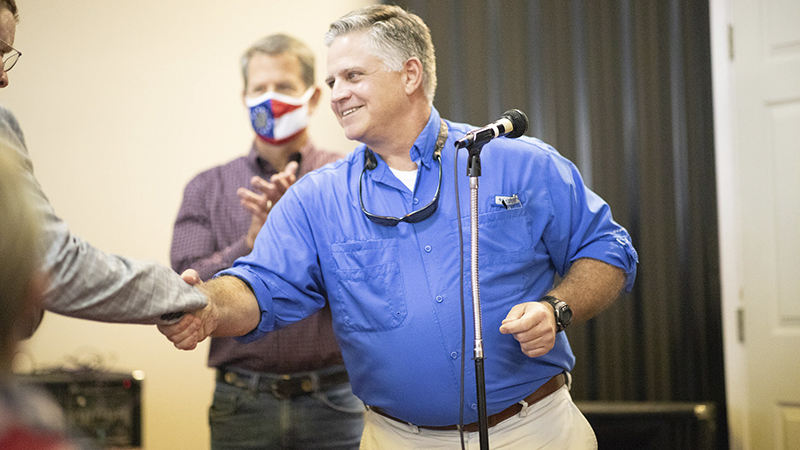 “Last night I began feeling mild symptoms consistent with a cold, with no fever,” the statement reads. “This morning when I began running a slight fever, I immediately took a COVID test, which has come back positive.”

Ferguson is self-quarantining and working from home, he wrote.

The news comes after Gov. Brian Kemp announced that he had been exposed to someone who had tested positive. Kemp announced Friday afternoon that he had a negative PCR test but is continuing to quarantine on the advice of public health officials. Kemp has not named Ferguson specifically.

Kemp and Ferguson both attended an indoor campaign event for state House candidate David Jenkins Thursday night in Hogansville. The event was held at Roger’s Bar-B-Que and drew a crowd of about 100-150 people.

“It was close quarters, and Drew [Ferguson] did not have a mask on … for much of the evening,” Stankiewicz said.

Stankiewicz said he was quarantining and planned to get tested Monday. He said he had also spoken with Hogansville City Council Member Toni Striblin, who owns the restaurant, and Hogansville City Manager Jonathan Lynn.

Striblin and Lynn both attended the event, Stankiewicz said, and they are both quarantining.

“I’m 76, and I have those underlying conditions you hear about … it wouldn’t be good if I got it,” Stankiewicz said.

Robertson said he felt “pretty comfortable” because he and his wife had COVID-19 in March.

Jones said he wasn’t around Ferguson and did not speak with him, but took a picture with Kemp while they were both wearing masks.

“I’ll see how it comes out, I’ve nearly quarantined myself anyway,” Jones said, adding that he mainly goes out to attend Board of Commissioners meetings.

Woodruff said he will quarantine and get tested if he starts feeling symptoms.

Crews said he had limited exposure to Ferguson and kept his mask on the whole time. He heard about Ferguson right before speaking with The LaGrange Daily News.

“I will have to quickly assess what I need to do,” Crews said, adding that he probably won’t get tested unless he develops symptoms, but will monitor his health.

Cadenhead also said he wasn’t near Ferguson. He will get tested if he develops symptoms.

“I noticed he [Ferguson] wasn’t wearing a mask, it bothered me,” Cadenhead said.

On Friday morning, Woodruff, Crews, Robertson, Cadenhead, Jones and Jenkins attended a campaign rally for Sen. David Perdue at Lafayette Square. The event was outdoors and most people wore masks.

Ferguson, the former mayor of West Point, is also the House Republican Chief Deputy Whip. He is up for reelection on Tuesday, facing Democrat Val Almonord in District 3, which includes Troup.