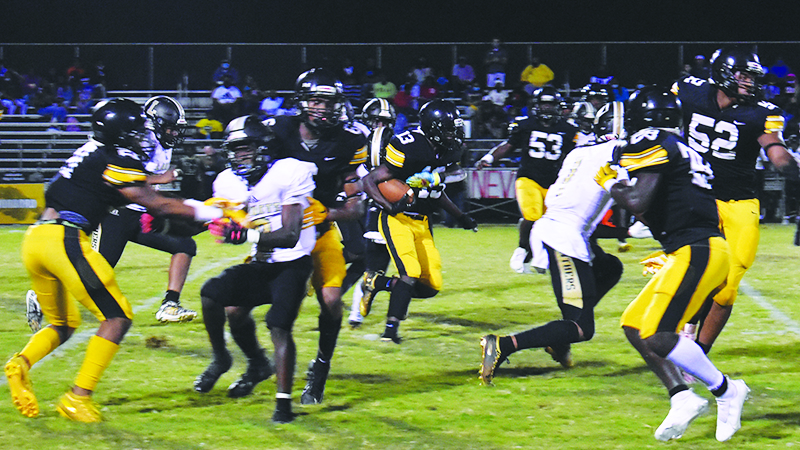 LaFayette was one of the two Chambers County teams dealing with the aftermath of Hurricane Delta on Friday, but it was able to leave New Site with a 12-0 win.

“We played tough. We played in the rain and standing water,” head coach Juan Williams said on Tuesday. “We started out the game really well. We put a drive together and drove down the field on them and scored. We really set the tone for what we were trying to do. We knew it was going to be muddy. Our kids did well.”

Blocking, stout defense and using the running game were the keys in the win, as neither team had many possessions in the game.

“Our linemen in the first half, blocked their butts off,” Williams said. “We stood up in the red zone. Our defensive line played well in the end to secure the win. We scored when we needed to score. Ja’Marie Daniel had a great game he ran the ball really hard.”

“We haven’t played a complete game,” Williams said. “With the circumstances last week, we knew it was going to be a game like that [sloppy and low scoring]. We’re going to try to put it all together. These guys are understanding what we’re trying to do. It’s still hard every week trying to get them ready, but I think they’re slowly trying to understand that we still have a shot.”

The win against Horseshoe Bend put the Bulldogs in control of their own destiny. They are now 2-3 in the region, which is tied with Vincent for that fourth and final playoff spot in Region 4 with a pair of region games left on the season.

The Bulldogs faceVincent in the final regional game of the season, which could prove to be the difference-maker in who makes the playoffs, but right now, Williams and the Bulldogs are focused on Fayetteville.

“We’re just looking forward to Friday and just taking one game at a time,” Williams said. “I tell our kids that we’re not looking ahead, we’re looking one game at a time. Fayetteville is all we’re thinking about. We’re trying to get three wins in this region, that would be great. Everybody is jockeying for position. We’re going to get their best punch and hopefully, they’ll get our best punch.”

The Wolves have lost their last two games, losing by a combined 64 points to BB Comer and Randolph County.

Overall, they are 1-4 in the region with their lone win coming against Horseshoe Bend earlier this season.

“They’re big and physical. They have some big receivers and they like to throw the ball a lot,” Williams said. “There are two or three teams here in the back that has a chance and everyone is going to give all they got.”

Both of the Bulldogs’ wins have come on the road this year. To this point, they have only played two home games, against Dadeville and against Lanett.

Friday is their next chance to win a game in front of their home crowd.

“You have to find a way to win. We’ve had two and didn’t win either of them,” Williams said. “That’s the push right now. Can we win at home? We’ve won on the road, but can we win at home? Can you give the city a chance to clap for you? That’s what we’re trying to do.”

The Bulldogs kick off at 7 p.m. on Friday.