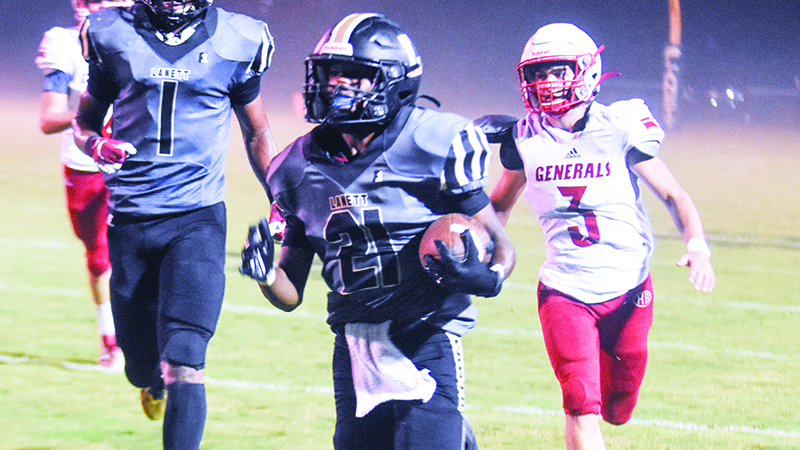 On homecoming, Lanett (8-2) took care of business with a 48-6 victory over overmatched Horseshoe Bend (1-8) to close the regular season.

The Panthers scored twice off of Generals turnovers in the first four minutes and coasted from there to an easy victory to keep the momentum going after a big week. Last week, Lanett dominated Randolph County, who was the top ranked team in 2A at the time.

Lanett was far from perfect Friday, especially on special teams, but led 34-0 before surrendering any points. Even those came after a special terms mistake by the Panthers, setting Horseshoe Bend up with some of its best field position of the night.

The scoring started when Lanett’s Jalen Gibson intercepted the Generals and returned it 35 yards for a touchdown. Lanett missed its first three extra points, so the lead was only 6-0.

Horseshoe Bend fumbled the ensuing kickoff, setting the Panthers up for another quick score. Kadarius Zachary connected with Trey Abner for a 30-yard score and Lanett led 12-0 with 8:52 left in the first quarter.

The Panthers added the first score of the second quarter on a 60-yard punt return by Makel Patrick. On the play, Patrick reversed field and ran down the home sidelines to put the Panthers up 18-0 with 10:39 left in the half.

Horseshoe Bend had its first real offensive success of the first half on the next drive, as an impressive run by Gavin Brazzell put the Generals inside the Lanett red zone.

Horseshoe Bend called up a trick play to try to get on the scoreboard, but Brazell’s halfback pass was intercepted by Zachary in the end zone.

The Generals found themselves right back in business again though, as Lanett went three-and-out and the Panthers punt on fourth down essentially went nowhere.

However, the ensuing drive ended in a familiar fashion.

Zachary picked off a pass in the end zone and returned it 95 yards before stepping out of bounds at the 10-yard line. Two plays later, Alanteo Cheeks scored from 5 yards out to put Lanett up 24-0. Seidron Langston caught a two-point conversion — one of two on the night — to put Lanett up 26-0.

Horseshoe Bend fumbled again on the ensuing kickoff return, and Lanett recovered. Langston caught a 15-yard touchdown reception and D’Quez Madden ran in the two-point conversion to make the score 34-0. A Generals punt late in the half appeared to give the Panthers a chance to add to their lead, but instead Lanett touched the bouncing ball and Horseshoe Bend recovered. On the next play, Brandon Tidwell caught a touchdown pass to put the Generals on the scoreboard with 55.2 seconds left in the second quarter.

“I told the coaches that those things will get you beat in a tight ballgame,” Story said of some of Lanett’s mistakes. “Not paying attention to what we’ve got [on the field], and I put that on my staff and myself. We’ll fix that and get that cleaned up. A lot of it was sending guys in, trying to rotate guys without seeing what was already out there… We had nine penalties that I counted, and you aren’t going to beat a good football team with that many penalties.”

Lanett added two touchdowns in the third quarter — a 20-yard Zachary pass to Abner and a 90-yard run by Madden — to go up 48-6. The clock ran for the entirety of the fourth quarter.

The game ended Lanett’s regular season, but the Class 2A, region 4 champions will be back in action in two weeks. Story said the team is in good position as he looks toward the playoffs.

“I’m comfortable with what we are right now as a team. We just have to keep getting better,” Story said. “Clean up the penalties, keep working as a team, get better in all three phases and we’re going to be fine.”