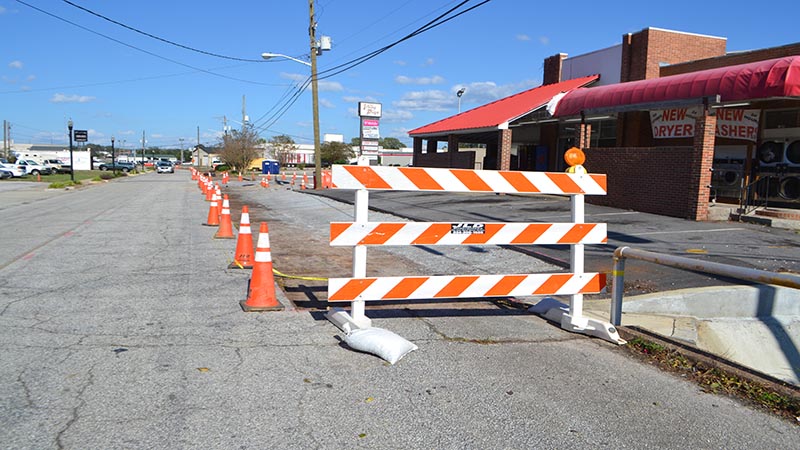 LANETT — Lanett is finishing up on the leg of its downtown ‘T’ and has gotten some great news on getting the top of the T done.

Lanett Mayor Kyle McCoy, along with members of the city council, announced Thursday morning that the city has been awarded federal grant funds to contribute to the ongoing downtown streetscape project on First Street. McCoy received notification from Gov. Kay Ivey regarding the funding approval.

Work is currently underway to complete the streetscape work on North Lanier Avenue. The lone remaining stretch is from the bridge over Tanyard Creek to the North Lanier intersection with Cherry Drive. Being installed will be wide sidewalks, planter areas with flowers, shrubs and small trees, decorative lighting and the street will be repaved. The ongoing work will also include some work on First Street. This will be from Gwen’s Tax Service to North 6th Avenue on one side of the street and an area near the First Christian Church on the south side.

The grant that was announced Thursday will allow for the completion of the streetscape look along First Street from Highway 29 to Eighth Avenue near Veterans Park and W.O. Lance Elementary School.

“We have had a great deal of success over the past few years obtaining grant funds for our downtown project,” McCoy said. “And this is another great step forward. It is evident that our project is one that’s viewed as highly beneficial to the community.”

The grant funds are from the Federal Transportation Alternatives (TAP) Set-aside Program in the amount of $512,256.

“It has been absolutely amazing to have seen our downtown area transformed,” McCoy said. “This grant will allow us to keep the momentum going. It puts us one step closer to completing the entire project.”