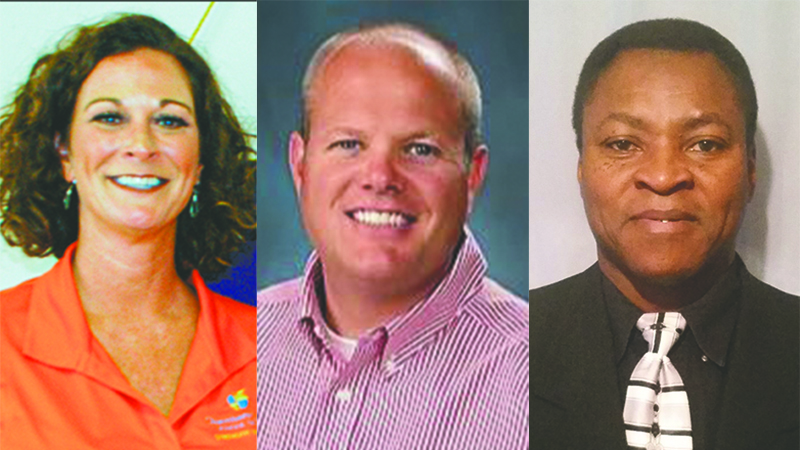 While most eyes nationally are going to be drawn to the presidential election on Tuesday, one of the biggest races in Chambers County is the Chambers County School District Superintendent race between incumbent Dr. Kelli Hodge, current Valley High School Vice Principal Casey Chambley and Winford Ashmore.

The start of the 2020-21 school year marked the start of Hodges’ 10th year as the CCSD superintendent.

In the decade that Hodge has worked as the CCSD superintendent, she said she’s worked to fix the district’s budget. When she took office, Hodge said that 20 percent of the district’s budget was paying off debts, but that number is down near three percent now. Two-thirds of the budget is allocated to curriculum and instruction.

Since reworking that issue, the district has been able to use the district’s money on maintenance issues, specifically roofing repairs.

“When I first became superintendent, I was able to rework a bond issue that was a little over $700,000,” Hodge said. “We were very heavy in debt at that time. Over 20 percent of our budget was allocated to debt, and we couldn’t get an additional loan or bond of any kind. We’ve been trying to move some of that into local money instead of seeking out huge loans.”

Recently, Hodge was able to work out another bond issue that gave the district an additional $450,000. Along with reworking that bond, the district has access to a state bond, which provides roughly $4 million.

Along with decreasing the debt, Hodge said she has been able to double the enrollment at both Inspire Academy, dual enrollment with post-secondary learning and the local pre-K schools.

Hodge has also made extracurricular activities a key point of emphasis in her 10 years as superintendent.

“We’re putting more money in athletics than we have in the past,” Hodge said. “The research shows us that kids that participate in extracurricular activities do better in school, stay in school and they do better after they graduate. We implemented club days and advocacy periods so every single kid has access to extracurricular activities. It’s a way for them to build a relationship with an adult in their school that’s based on something other than academics. We’ve got a wide variety for kids pre-K through 12th grade now.”

When the pandemic shut down the school year in March, the district had a little bit of a foundation already implemented, as they already had a virtual program and had taken part in the one-to-one initiative, where there is a laptop available for every student.

At the last budget meeting, Hodge announced that an additional 700 laptops had been purchased with CARES Act funding as well.

In her nine-plus years as superintendent, the CCSD graduation rate has risen to where it is now at 90 percent.

Chambley has been in public education for 19 years, most of which have come from inside the CCSD. He is currently the vice principal at Valley High School, a role that he also filled at LaFayette High School earlier in his career.

“I decided to run because I had to make a decision if I needed to move my kids into a better situation, academically, athletically and socially, or run for this office and try to make change myself,” Chambley said.

Chambley’s plan is called the B.R.I.C.K. plan, which stands for buildings, respect, identity, commitment and kids.

The building part of the plan deals with improving the facilities and schools that are in the county.

Respect is a change in culture for everyone in the school system. Identity deals with athletics and academics.

“Identity with our rigor from our athletics. There are people that don’t want to live in the county or businesses not wanting to locate here because of the buildings, test scores and athletic facilities,” Chambley said. “

That identity over the past 10 years has diminished, and we have to fix that. Identity is everything. We are competing against these other communities.”

Commitment is the commitment to the students and teachers.

“We are hemorrhaging teachers. Our teacher turnover, especially at the high school level is atrocious,” Chambley said. “We lose a lot of good teachers, and they are the common denominator to rigor in the classroom. Teachers make a good school.”

The kids portion of the plan deals with finding the best possible outcome for the students in the district.

“We need to make sure that our kids are at the forefront of every decision we make,” Chambley said.

“Being a parent and seeing things, you’re involved,” Chambley said. “When you’re involved in the system, especially in the middle and high schools, it’s evident. Having the perspective that I have, a lot more evident is the lack of resources that we utilize to give the students that they need.”

Ashmore has spent his career in five different states. According to a publication he put on his Facebook page, Ashmore says he will be transparent concerning issues in the school district.

One of his biggest priorities is school safety and he will be accountable to the parents and students of Chambers County.

Ashmore could not be reached for comment for this story.