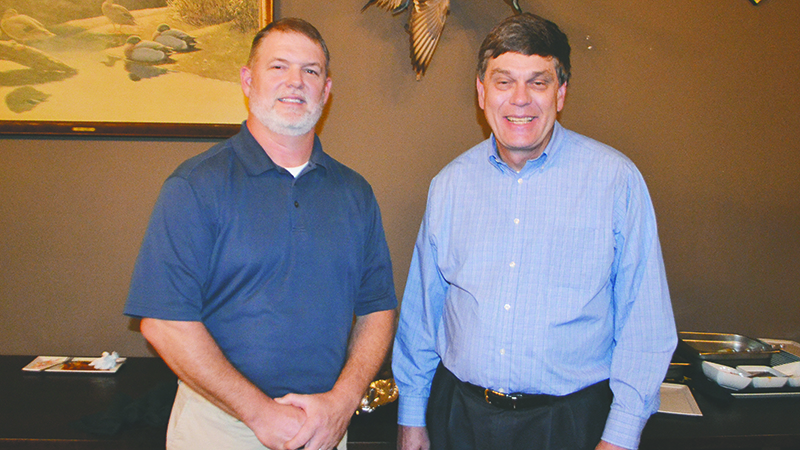 Valley Haven Executive Director Craig Brown (left) was the guest speaker at Thursday’s noon hour meeting of the West Point Rotary Club. He talked about the struggles Valley Haven School has had to contend with since the COVID-19 shutdown in March. At right is Rob Huling, the club president. --Wayne Clark

WEST POINT — Like many organizations, Valley Haven School has had a very difficult year in 2020. Since a national emergency due to the spread of COVID-19 was announced in March, the school had to go through a lockdown for a time and lost out on having its all-important Hike/Bike/Run fundraiser. Classes have resumed, and with the school being in a 28,000-square-foot building there’s ample room for social distancing given the number of clients and staff that’s on hand.

Valley Haven’s executive director, Craig Brown, was the guest speaker at Thursday’s noon hour meeting of the West Point Rotary Club, held inside the hunting lodge at the American Smokehouse in downtown West Point, and talked about the struggles the school had contended with this year.

“This has been a hard year for everyone, and especially for Valley Haven,” he said. “We made the decision to close the school without being told by the state. We’d planning on closing on a Friday, but things had gotten so bad with the virus that we moved it up to Tuesday. I have had lots of sleepless nights since then.”

Valley Haven’s contract with the state calls for the school to have 247 class days each calendar year. That’s for full funding from the state. It’s prorated based on the number of days lost. The school took a big hit on missing a large number of days. Money from the federal CARES Act helped make up for that.

In April, the state provided guidelines on what needed to be done to keep everyone safe. “We went through that month deciding what to do to keep the school going,” Brown said. “We were able to get a PPE loan through Farmers & Merchants Bank. That’s an example of how small-town business really helps. We have had a school since 1959 because of our small-town businesses and individuals who have backed us over the years.”

Having to cancel the 2020 Hike/Bike/Run was a bitter pill to swallow.

A virtual run helped make up some of the loss. About 60 runners took part and it generated over $30,000.

The CARES Act helped pay for May, June and July. Though the stimulus money hasn’t been continued, Valley Haven was able to get 30 percent funding to get through September and October.

“We’ve been figuring out how to keep our people safe,” Brown said. “The buses are the problem. We can keep them six feet apart in the classrooms, but I’m not comfortable with them sitting close to each other on the buses.”

Brown said that extra care is being taken every day to sanitize the bus.

“If one person gets the virus, we may have to shut down,” he said.

There was a mandate to return to classes in September. The students were required to sign waivers in order to attend. An infection control plan had to be implemented before classes could resume.

Just when things were starting to look OK for the start, the air conditioning system went down. Keith Chandler was called on to get it running but ran into a problem.

“The part he needed went back to 1974 when it was first installed,” Brown said. “They didn’t have anything like that in stock, and they had to take it from their archives. Our unit on the roof went out, and it cost us $18,000 to get that one fixed.”

Brown said that he has prayed a lot since this past March and that his faith has been strengthened through this ordeal.

Some of Valley Haven’s long-time clients have had their struggles. Some were placed in group homes before finding their way back to Valley Haven. One client lived with her brother and sister, and all three caught the virus. Thankfully they are doing well now, but they were isolated in a hotel in Opelika for a time.

“We were able to get more of them back in October,” Brown said. “We are now up to 31 and hope to get more back soon. We will lose some of them due to advancing age or underlying health conditions.”

“They want to come back to school but can’t,” Brown said. “They can’t understand why. There is a waiting list for some who would like to come here. We could get them enrolled with waivers. We are blessed just to be open.”

The size of the building is a major plus.

“We have people visiting us who are amazed at what we have here,” Brown said.  “They tell us we must have great community support, and we do,” he said. “Our foundation and our board are very supportive of us, and we appreciate that. People call us and ask if there is anything they can do to help us, and we appreciate that. We are still there. We still have Valley Haven, but it’s different. It’s not like we had before the virus. We are living in a new normal, and what we had before 2020 may never return.”

Brown thanked Rotary Club members on having had a successful golf benefit for the school. The annual Walt Meadors Tournament took place several weeks ago at the Point University Golf Club and helped generate some much-needed support for Valley Haven.

Brown said that he and other school officials were looking at having an online auction in the coming year.

He said that it was tough missing out on LaFayette Day earlier this year.

“We are looking at how the Rockingfest will go in downtown LaFayette in November 14th. We hope it goes well,” he said.

Valley Haven had a cushion going into this year, and that has helped a lot.

“We’re doing okay right now financially, but next year will be a different story,”

Brown said. “We’re better off than many similar schools to Valley Haven. The main thing we need from the public is their thoughts and prayers.”

A major need is to have some younger clients.

“Our average age is between 50 and 85,” Brown said. “We’d like to have some younger people. They can go to high school until they are 21. They then can get on a waiting list.”

Getting off the waiting list and into school is not an easy task. One person has been waiting for eight years to be admitted. There are lots of hoops to go through before the state will allow a student to be admitted.

“I try to be as positive and as optimistic as I can be,” Brown said. “It has been really hard since March. I have to decide what’s best for our students and to keep the school open. The federal stimulus helped us a lot this year.”

“The staff has been really good in adapting to the new normal,” Brown said. “It takes a lot of common sense and thinking outside the box for us to get by now. We are doing all we can We need your prayers to help get us through. I know in my heart that this community won’t let us fail.”