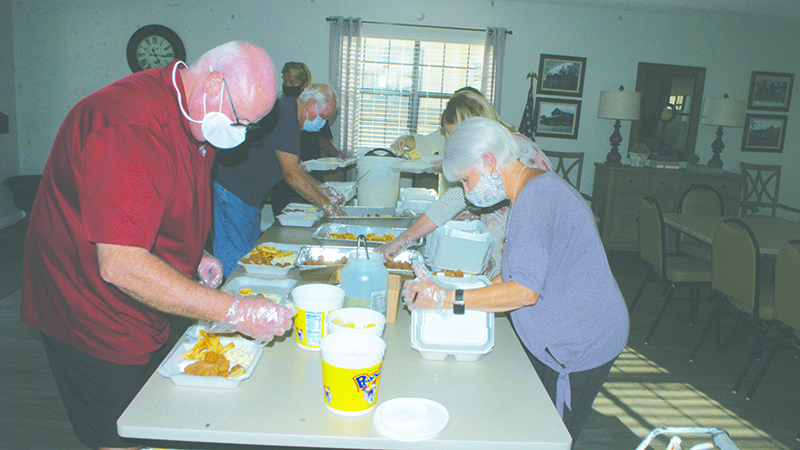 The Kiwanis Club of Valley hosted its annual fish fry for Sylvia Word Manor late Thursday afternoon. Sheriff Sid Lockhart did the cooking from his trailer, and members of the club made close to 50 plates of catfish, cole slaw, hush puppies and French fries. The boxed fish plates were delivered door-to-door by members of the club. --Wayne Clark

VALLEY — Late Thursday afternoon, residents of Sylvia Word Manor were treated to an event they look forward to all year. A fish fry organized by the Kiwanis Club of Valley took place, but it was a lot different from what it had been in previous years.

The catfish plates were prepared on-site by Sheriff Sid and Sharon Lockhart and Major T.J. Wood, but instead of having dinner in the activity room and then enjoying bingo with members of the club, the residents instead received their meal in their room. More than 40 boxed catfish plates were delivered door-to-door by members of the club. A shopping cart made it possible to do it in a couple of trips.

“Most of our residents are staying in their rooms,” said Sylvia Word Manager Tracy Johnson. “Many of them have family members who aren’t coming to see them now.”

This is the impact of COVID-19.

The annual fish fry is something Kiwanis Club members have been doing for Sylvia Word residents for decades now.

“Years ago, Bo Royal had some fish cookers we’d do the cooking with,” said long-time member Henry Bledsoe. “Sid has been doing it for us in recent years, and we appreciate that.”

Lockhart brought his trailer and got started with the cooking at around 4:30 p.m. Within the hour, the aroma of freshly-cooked fish wafted throughout the Sylvia Word complex.

“Some of the residents told us they hadn’t eaten all day.” said club member Patsy McKenzie, who helped with the door-to-door delivery. “They wanted to be hungry when we brought them the fish.”

It was disappointing for many of them not to meet in the activity room. Many residents enjoy interacting with Kiwanis Club members and playing bingo.

On a comforting note, club member Jeff Goodwin issued a bingo challenge for 2021.

“We will be back for our annual fish fry on Oct. 21 next year, and we’ll all have fun with bingo,” he said.

The activity room has some new tables and chairs.

Giving the room a homey feel are large framed photographs of well-known local scenes such as the Chambers County Courthouse in LaFayette, a historic photo of the West Point Presbyterian Church (which was leveled in the March 1920 tornado) and the First Christian churches in Fairfax and River View. There’s also a most interesting photo of a Model T parked underneath a shed with a cotton wagon. No doubt it was taken back in the day when Chambers County was one of the top cotton-producing counties in Alabama.

“We are being very careful with COVID,” Johnson said. “Everyone wears masks in public areas, and we have done lots and lots of sanitizing. We have cut back on our group programs such as bingo and Bible study. Everyone wants to get back to those activities when it’s safe.”

Located in the heart of Valley not far from Walmart and the Village Square Shopping Center, Sylvia Word Manor is a HUD-affiliated housing complex for seniors. Anyone who is 62 years of age or older and who meets a certain income requirement is eligible to live there. There is a waiting list to apply. At present, 49 of the 50 available apartments are filled.