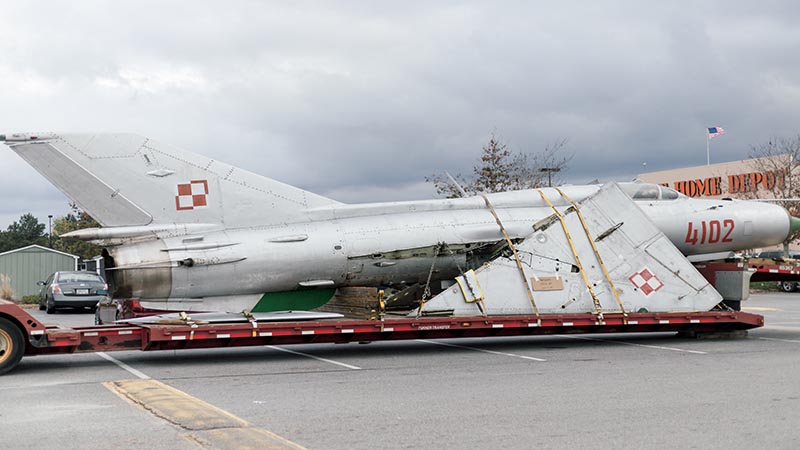 This past weekend, passersby had a look at a Russian-made supersonic jet that was parked at parking lots in LaGrange. The aircraft was being moved by David Wild, a LaGrange resident who operates Wild Aviation, which specializes in transporting planes across the country.

The jet is a Mikoyan-Gurevich MiG-21. The MiG-21 is capable of about twice the speed of sound, according to Encyclopedia Britannica. More than 9,000 were produced for the Soviet Union and other air forces. This particular plane, serial number 4102, was used in the Polish Air Force, Wild said. It was built in 1966.

The plane is owned by the U.S. Marine Corps and will be used as a training aid at the Air Station in Yuma, Arizona, according to Wild. The USMC bought it from an aviation museum in New York and had Wild haul it to LaGrange.

In LaGrange, work is being done on the plane by Randy Smith of Precision Fabrication.

Flight records were included with the plane, Wild said, but he can’t read them as they’re written in Polish.

Wild isn’t sure if the plane has seen combat, however.

After countless people took pictures of the plane while it was being hauled down from New York, Wild had the idea to display the plane in public.

He first parked it in the LaGrange Mall parking lot on Saturday but was told to move it that night.

Staff at Home Depot across the street were glad to let the plane stay in their lot, where it was parked until it was taken to Precision Fabrication on Monday.

“It was just so people could see it … there was just a steady stream of people. It was all over Facebook and everybody enjoyed it, which was the whole idea,” Wild said.

“My hope was that 20 years from now, some kid will be at the Marine Corps training camp and have a picture of him standing in front of a MiG-21. … You never know.”

According to The New York Times, the MiG-21 is the most-produced combat jet in aviation history since World War II. It was nicknamed the “Fishbed” by NATO due to its shape and has also been called “The People’s Fighter,” due to its low maintenance cost.

Wild, who’s been hauling planes for about 18 years, also hauled a A4F Blue Angels plane through LaGrange on his way to the Southern Museum of Flight in Birmingham, Alabama.

The plane was left at LaGrange-Callaway airport for a weekend in July 2017.

The plane will be made non-flyable, Wild said.

“You’ve got to remember these planes are 50 years old or longer,” Wild said. “And being out of Russia or Poland, there’s not spare parts laying around.”

According to Wild, the Marines plan to use computer programs that will help soldiers identify enemy or friendly aircraft by sight.

The aim is to reduce friendly fire incidents by having marines know which plane is which.