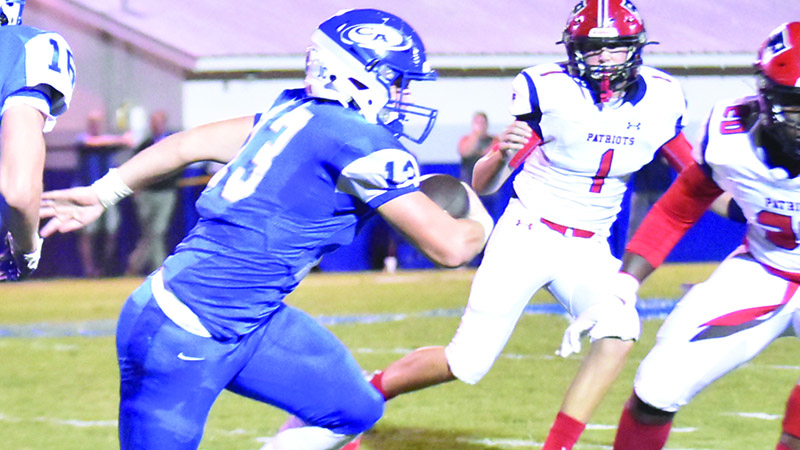 Heading into the season, Chambers Academy head coach Jason Allen knew that he had to replace his workhorse running back Braxton Allen, who finished with more than 1,500 yards and 19 touchdowns in 2019.

Originally, Allen wanted to fill the spot by committee, but junior running back Jordan Benbrook had other plans.

“He played behind a really good one last year in Braxton, but he waited his turn,” Allen said. “He’s made the most of it once the time has come. He took control of our tailback position early in fall camp, and he hasn’t let go of it. He’s had a really good year, and I’m proud of him. He’s a good kid.”

While he was sitting behind Braxton Allen, Benbrook took the opportunity to learn from the senior and incorporate some of Braxton Allen’s game into his own.

“I’ve always looked up to him the way he did his stuff,” Benbrook said. “I just followed in his footsteps. He was also pretty physical, and that’s what I got from him, just keep my head lower and keep driving through.”

While some running backs in high school look to use their speed to avoid contact, Benbrook enjoys the physicality of the game.

“When I was younger, I always played with the age group above me. I just like hitting people and lowering my head,” Benbrook said.

That physicality has been a key part of Benbrook’s success in his junior season.

“He’s not a burner. He’s a between the tackles type of back that gets a lot of YAC [yards after contact] yards,” Allen said. “He’s tough to tackle and we feed off that. The more he gets going, the offensive line feeds off that. He doesn’t get tired, but I think the defenses get tired of tackling him. We’re going to use that to our advantage.”

Benbrook showed his ability to run through contact in the Rebels win against then-No. 7 Crenshaw. The junior powered his way to a career-high 271 yards and a pair of touchdowns.

This season Benbrook is the Rebels leading rusher, finishing the regular season with 1,190 yards and 18 touchdowns. Of the 10 regular-season games, Benbrook finished with more than 100 yards seven times and reached the end zone in nine games, scoring multiple touchdowns eight times. The junior is also averaging nearly 10 yards per rush.

“It’s just being physical and keep my head down while running with power,” Benbrook said. “I just follow my blockers. The offensive line has been doing their job, and we’ve been getting a bunch of holes. I’ve just been hitting them, and we’ve been executing.”

This season is Benbrook’s second season at Chambers Academy. For Allen, the biggest step Benbrook has taken in his junior year is just getting more comfortable within the offense.

“He’s more comfortable,” Allen said. “He’s in a leadership type of role. He wants to be a good teammate.”

While the Rebels passing game has been more explosive than it’s been in past years, already racking up 2,380 yards, everything the Rebels do on offense still stems from their ability to run the ball, meaning it starts with the player they call J-Rod.

“It feels pretty good because I’ve worked hard to get where I am,” Benbrook said. “I just like it. It’s different, but I like it because I’m used to playing defense … I just like having the ball in my hands.”

The Rebels head into the first round of the playoffs where they will host Autauga Academy, who has won the last two AISA AA Championships.

The Generals finished the regular season at just 2-6, their most losses in a season since 2010. The two regular-season wins are their fewest since 1991, when they finished the season winless.

“They’ve had some struggles this year. They have a lot of new kids and new faces, but the thing that remains constant is coach [Bobby] Carr is an excellent coach,” Allen said. “They’ve gotten better as the year has gone on. They have some talented guys, and we’re expecting them to be playing their best football when they come here. They have a lot of pride. They’re two-time defending state champs, and there’s a lot to be said for that. We’re not going into this with one eye closed. We have our ears up and eyes open. We’re expecting a dog fight.”