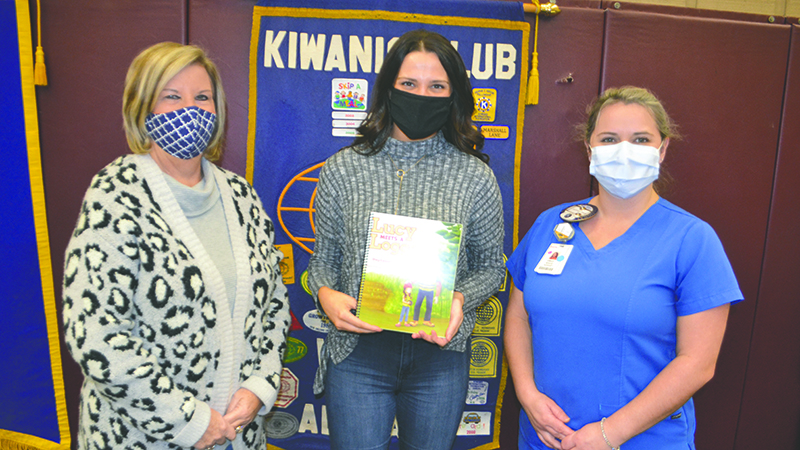 Stephanie Fuller (at center) talked about her new children’s book, “Lucy Meets a Logger,” at Wednesday’s noon hour meeting of the Kiwanis Club of Valley. At left is Bobby Ann McCollough, the program chair, and at right, Ashley Beck, club president. --Wayne Clark

VALLEY — A pair of local sisters have a way of getting children’s books published. Last year, Kimberly Carter of the Chambers County Development Authority (CCDA) staff published a children’s Christmas book about a child finding Santa Claus in Chambers County. This year, Kimberly’s sister, Stephanie, has published a children’s book about a young girl learning about the Alabama forestry industry. It’s entitled “Lucy Meets a Logger.”

Stephanie was at Wednesday’s noon hour speaker at the Kiwanis Club of Valley. A 2015 graduate of Valley High, Fuller earned a degree in agricultural economics from Auburn University in 2019.

“Forestry runs deep in our blood,” she said. “Our dad is a logger, and we grew up around it.”

“It’s not a fast-paced, shining industry, but there are high-tech jobs in it with good wages,” she said.

The Forest Workforce Training Institute she works for is attempting to reach Alabama students from the eighth grade on and let them know about good-paying careers in forestry. It’s part of an overall effort to get younger people involved in the field. The average age of an Alabama forestry professional is 54.

Fuller’s background of being raised in a forestry family was a key factor in her being asked to write “Lucy Meets a Logger.”

“I was the only one in the office that grew up in the industry,” she said. “My boss knew how close it is to my heart. I guess that’s why he asked me to do it.”

The goal of the book is to get across to children that loggers aren’t bad guys who destroy beautiful forest land.

“The book is based on what I learned watching my dad,” Fuller said. “Everything in the industry is based on zero waste. For every tree that’s cut down, three more are planted.”

The book is colorfully illustrated and the text rhymes in a way children love to hear.

Fuller said she’s looking forward to visiting schools and talking about “Lucy Meets a Logger” once COVID-19 has passed.

“I really do want to visit the schools once they open back up,” she said.

Books like “Lucy Meets a Logger” are tools the forestry industry can use to get a message across that logging is a good thing in the state, especially when responsible practices are followed.

An estimated 95 percent of the state’s woodland areas are privately owned. It’s up to the individual landowner how to manage that land.

“A large majority of landowners regenerate their land,” Fuller said.

In other words, they plant pine trees in rows.

When harvested forests are allowed to regenerate naturally, there will be a forest mixed with pines and hardwood trees growing back.

A growing number of older forest owners are planting trees with their grandchildren in mind. It has often been said that when a 20-acre site is planted in pines when a child is born, those trees can pay for their college education when they are 20 years old.

Copies of Fuller’s new children’s book can be bought from mascotbooks.com. Go to the site’s book store and search “Lucy Meets a Logger.”

Copies will soon be available at Amazon Books and at Books a Million and Barnes & Noble. Fuller said she really enjoyed writing the book and is hopeful children and their families will enjoy it.