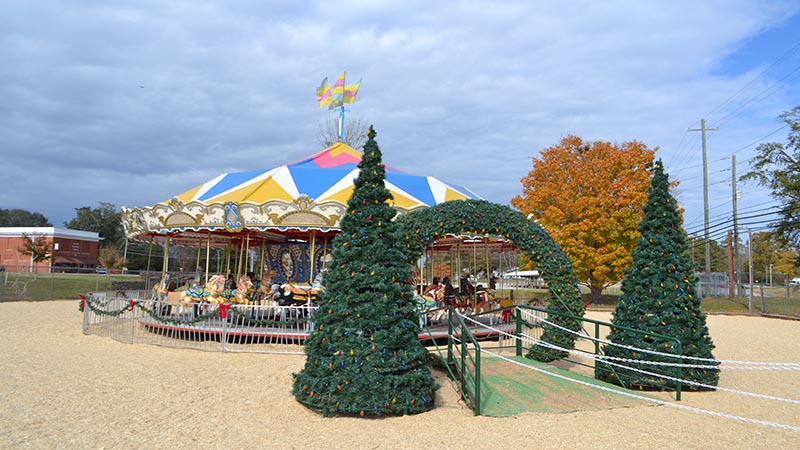 VALLEY — Weather permitting, the 64th running of the Christmas Merry Go Round will be starting at 1 p.m. Sunday afternoon, Nov. 29.

“Thunderstorms are in the forecast, and if the weather’s bad we will delay it,” Valley Parks & Recreation Director Laurie Blount told The Valley Times-News. “If there’s light rain we may go ahead with the start. We won’t have it if there are thunderstorms. We will post what we’ll do on Facebook.”

This beloved holiday tradition began in 1956 and has continued every year since then. Over three million riders have participated over the years. This includes people from almost every state in the U.S. and from many foreign countries. Many local people started riding it when they were children that first year it ran on a little league field in Fairfax and have continued to ride it every Christmas season since then. They have since ridden it with their children, grandchildren and great-grandchildren.

The merry go round that has been coming to the city in recent years is a story in itself. It was built in 1964 and is a beautiful machine to ride. It’s one of owner Richard Tinsley’s most treasured rides. Tinsley runs an amusement company in High Hill, Missouri not far from St. Louis. On most years, he has lots of rides going to state fairs all over the midwest. COVID-19 hit his business really hard this year.

“When we contacted him to see if he could bring it to us this year he was both surprised and grateful,” Blount said.

Prior to Covid-19, he’d been taking it to only two venues, the Minnesota State Fair, where it was set up indoors at the famed Mall of America, and to Valley.

He didn’t get to take it to Minnesota this year because of the pandemic but was pleased to be able to bring it to Valley. He made the long drive down and directed the set-up crew in getting the beautiful carousel ready to run.

Had it not been such a long-time treasured event, the Christmas Merry Go Round may have been canceled this year.

Blount is asking the public to understand and to practice the safety protocols that have been put in place this year.

Wearing masks is mandatory to ride the Merry Go Round this year. Those who don’t have them will be turned away.

“We think we will be okay on the tennis court,” Blount said. “The line will be roped off on both sides leading to the bridge where everyone gets on. We’d like for people to be single file while they are waiting.”

A misting machine will sanitize the wooden horses after each ride. This will take a minute or two, and the riders are being asked to be patient while this is underway.

“We are doing all we can for it to be safe,” Blount said. “Every horse will be sanitized between rides. We are asking everyone to be patient while this is taking place. Don’t run to get on while those who have gotten off the Merry Go Round are leaving.”

Rain is in the forecast for the weekend and for several days next week. Inclement weather always keeps the crowds down.

There have been years where the weather was great throughout Merry Go Round season, and crowds of up to 90,000 people would show up over the course of the season. In years where it’s unusually cold or rainy, the crowds may be down in the 30,000 range.

Unless the weather is really bad, the Christmas Merry Go Round will be running every day from Sunday afternoon until 5 p.m. on Christmas Eve. The hours are 1-5 p.m. EST on Sundays, 5 to 9 p.m. on weekdays and 10 a.m. to 9 p.m. on Saturdays.