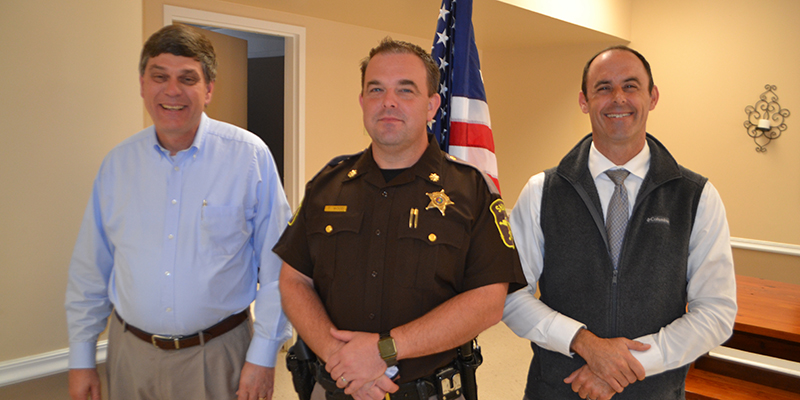 LANETT — West Point Rotary Club member Will Johnson had an unusual way of coming up with Thursday’s noon hour speaker. He had a chance meeting with Major T.J. Wood of the Chambers County Sheriff’s Office while he was working Tuesday’s election. He asked him what all sheriff’s office employees did during a major election and got the full rundown. When Wood made the point that it’s something that starts several days before an election and extends into the next week, Johnson thought it would make a good topic to discuss at Thursday’s meeting of the Rotary Club.

Wood, who had previously spoken to the club about a women’s self-defense course being offered by the sheriff’s office and its support for the Alabama Sheriff’s Girls Ranch, happily obliged.

“Our responsibility for an election doesn’t start on election day,” Wood told members of the club. “We see that everything needed for the election, such as the voting machines, the ballots and the partitions, are delivered to every polling site in the county. There are 16 of them. One of them is in Frogeye. It’s almost like one of those places you can’t get to from here. You have to leave Chambers County, go into Tallapoosa County and then back into Chambers to get there.”

Wood said that the COVID-19 pandemic made the process more difficult this year.

“We had to get to the polling places a day early this year and sanitize in order to have a safe place to be for the poll workers and voters,” he said.

Law enforcement officers receive training to know what to do in the event a voter is harassed or intimidated for some reason.

Something that frequently occurs at voting places is that candidates, or their supporters, sometimes stray inside the area they are limited to when voters are arriving at the polls.

“They cannot campaign anywhere near where people are voting. They can be outside but at a certain distance away. Officers have to look for this and sometimes have to tell them to get back,” Wood said.

Candidates and supporters of candidates can wear clothing or stickers on their clothing identifying their support of a candidate, but they are not allowed to mingle inside the polling place.

Wood said that officers encouraged people to wear masks while inside the voting place but they weren’t required to wear them. They also encouraged everyone to stay six feet away from the next person.

One member of the club asked Wood if he ever got complaints about candidates or their supporters passing out campaign materials to people as they were entering a voting place.

“In almost every election, we get complaints of people being too close to the door,” Wood said. “In most of those cases, we politely show them where they can and can’t be. Most of the time they are very cooperative.”

Like most officers, Wood offers assistance to the elderly or the disabled who are making their way to the polling place.

“It’s gratifying when they call me by my name when they thank me,” he said. “In many cases, I don’t know who they are.”

When the polls close and people await the results, the sheriff’s office deputies have to see that the voting that has been recorded at each precinct gets to the courthouse. Wood said that Probate Judge Paul Story and his staff did some amazing work to get the results back in a relatively short period of time Tuesday night. “It went so smooth this year,” he said. “They did an amazing job.”

Club member Greg Duffey said that he and his wife had voted absentee and that they’d been impressed how quickly they’d been able to do it in the office of Circuit Clerk Lisa Burdette.

Like most of the country, Chambers County had a good voter turnout with more than 15,000 people taking part.

Wood said that the deputies see that the voting machines are secured before and after the election. “We are still doing election stuff,” Wood said, noting that the provisional ballots will be counted on Tuesday. They won’t affect the outcome of any election this year.

Wood commended the job being done by poll workers and especially by the precinct inspectors.

“They are responsible for everything that goes on in the polling place,” he said. “When the polls close at 7 p.m. CST, they make sure that everything that had taken place there that day had been done the right way, that all the i’s have been dotted and the t’s crossed.”

Wood said that the integrity of an election was of the highest priority.

“We will do our best to see that the vote you cast is recorded the way you wanted it to be,” he said. “Before every election, we make sure every step is taken to make sure the vote is accurate. Judge Story and Nanette Brooks have lots to do before and after an election.”

The Frogeye community Wood spoke of is hard to get to from Chambers County because it’s on the west side of the Tallapoosa River with the rest of the county being on the east side. There’s no bridge in the area, and anyone going there must get there by going through Wadley and into Tallapoosa County before re-entering Chambers.

The voting precinct there is named Sparkling Springs.

How did it get the name Frogeye? According to local oral tradition, there was a store there that sold alcoholic beverages when the county was dry. The store owner kept a huge plaster of Paris frog in the window as a way of informing his customers to enter for a good time or to stay away if being too closely watched by the sheriff. If the frog faced the window and you could see its eyes, that meant to come on in and join the fun. If its backside faced the window and you couldn’t see the eyes, that meant to stay away.