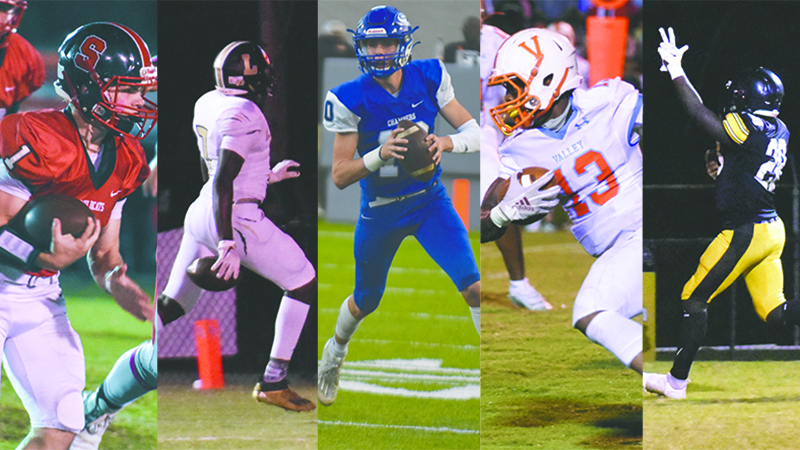 In early July, the 2020 high school football season was a huge question. No one knew what it would look like, who would be allowed to watch the games and how many games each team would be able to play.

While there were a couple of shutdowns this season because of COVID-19 and two hurricanes, the 2020 season finished as a big success for several teams.

Chambers Academy lifted the AISA Class 2A state championship trophy for the second time in three years and made it four straight years a local school has won a state football championship.

Lanett reached the third round of the playoffs after dominating the season.

Valley and LaFayette both had successful years under their first-year head coaches. LaFayette reached the playoffs and Valley was in contention to do so until a COVID-19 related shutdown took that chance away.

Overall, four teams reached the playoffs, while two advanced at least one round.

Lanett and Chambers Academy each led the way with nine players selected for the 2020 All-Valley Area Football Team, which was selected by the staff of The Valley Times-News after dialogue with local coaches. The players are listed in alphabetical order.

Player of the Year

Coach of the Year

Allen finished with 3,209 passing yards and 1,179 rushing yards this season, totaling 4,388 yards and 43 touchdowns this year. In his final high school game, Allen led the Rebels to a state championship win, finishing with more than 400 yards in the game.

Benbrook took over the running back role from Braxton Allen and starred during his junior year. He finished with a county-high 1,338 yards and 22 touchdowns on 161 carries (8.3 yards per carry).

Heath had been a third option for the last two years but was a workhorse for the Rams this year. In just six games, Heath finished with 730 yards and 10 touchdowns on 133 carries. He finished with more than 100 yards in all but one game this year.

Madden has been called the best athlete in Lanett by several different coaches and showed it his junior season. He finished with 1,240 yards and 18 carries on 141 carries.

Abner is the Panthers’ tight end, but he led them in yards, catches and touchdowns, finishing with 36 receptions, 578 yards and eight touchdowns.

Singh was the Bulldogs’ biggest threat in the passing game. He finished with 458 yards and eight touchdowns on just 19 catches. Last year, he finished with just 58 yards on seven catches.

Fetner was a key tackle in the Rebels’ offense that averaged nearly 500 yards a game.

Mills was a standout on the offensive line for the Wildcats, who had a run-heavy offense this year.

Sheffield capped off his football career with an appearance in the AISA All-Star game. He was a key member of the Rebels’ offensive line, playing a guard spot, on a team that pulled their guards on most running plays.

Thomas finished the 2020 season with an 84% grade average and 36 pancakes.

Billingslea finished with 62 total tackles (37 solos) and 12 tackles for a loss. He added four sacks and a fumble recovery.

Colley finished his first year at Chambers Academy with 108 tackles and 11 tackles for a loss.

Oliver finished his high school career with 121 tackles and 18 tackles for a loss. He also had a team-high six sacks. He also played on the offensive line.

Dunn was the Rams’ leader on defense. He finished with 54 total tackles (30 solos), 10 tackles, two sacks and two interceptions for a loss in just six games this year.

Green finished with 45 solo tackles and 29 assists. He also added eight tackles for a loss and three sacks. He also served as the Bulldogs’ center.

Daniel, who also served as the Bulldogs’ quarterback, finished with 11 solo tackles, 11 assists, nine pass breakups and three interceptions. He finished 67-of-125 for 1,011 yards and eight touchdowns as a quarterback. He also added 85 carries for 308 yards and a touchdown on the ground.

Hurston finished with 26 solo tackles, 14 assists, six interceptions and 17 pass breakups. As a receiver, he finished with 20 catches, 369 yards and five touchdowns. He also scored six touchdowns on special teams.

Trammell finished with 25 tackles and an interception on defense. Most teams didn’t throw passes his way this year.

Tolbert finished his career less than 100 yards shy of Springwood’s all-time rushing record. He finished his senior season with 1,1825 yards and 20 touchdowns on 185 carries. He added 46 tackles and an interception on defense.

Zackary did a little bit of everything for the Panthers, playing quarterback, wide receiver, safety and was a special team returner. As quarterback, Zackary finished with 1,1010 yards and 12 touchdowns on 55 completions. He also ran for 961 yards and 13 touchdowns on 89 carries. He also had three touchdowns and 124 yards on 11 catches. On defense, he finished with 72 tackles, five for a loss, nine interceptions, 16 pass deflections, five forced fumbles and three fumble recoveries.

Daniel finished with 113 carries for 826 yards touchdowns in five games at running back. He also finished with 18 catches for 206 yards and a touchdown as a wide receiver. He added 31 tackles and four interceptions as a middle linebacker.

Key finished with 541 yards and six touchdowns on 102 carries.

White finished with 32 catches, 491 yards and seven touchdowns in his first year at wide receiver.

Linson finished with 39 tackles and a sack in just six games.

Abney finished with 832 yards and 11 touchdowns. He also averaged 38 yards per punt.