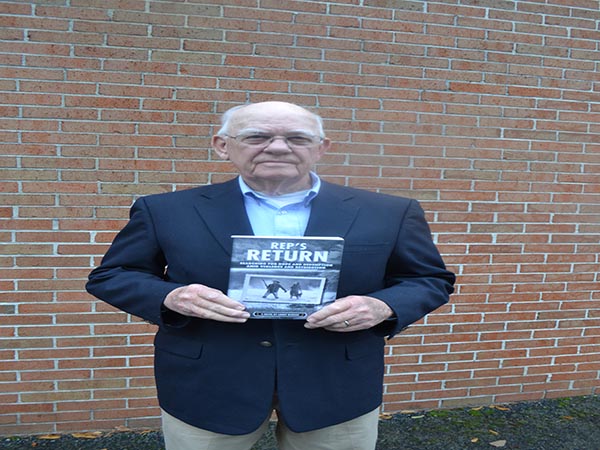 VALLEY — Lanny Bledsoe had always thought about writing a book but had always put it off.

It was one of those situations where he didn’t think he had the time to take on something like that. That changed this past spring.

The COVID-19 shutdown gave him plenty of time to devote to his first work, “Shoal Creek.” That first book tells the story of Rep, a young boy from south Georgia who runs away from an unhappy home life and grows to manhood on his own.

He eventually finds his way to Shoal Creek in west Georgia and falls into conflicts with a farm family. Across the river in Alabama is a mill village named River Bluff that becomes central to the story.

The book was published earlier this year by Amazon, and Bledsoe has gotten favorable comments about it from people not just in the local area but all over the U.S. Shoal Creek has received a total of 62 five-star reviews, the highest rating given.

There was one problem with it.

The book ended with some unresolved conflicts, and people who loved the story were clamoring for a sequel.

Fans of Rep’s story should be glad to know that a follow-up book has been published, and Bledsoe is well into writing a third book.

The second book is entitled “Rep’s Return: Searching for Hope and Redemption Amid Violence and Retribution.”

“People from all over have called me, and told me they liked Shoal Creek, and I’m starting to get calls about Rep’s Return. They like that book, too,” Bledsoe said. “They told me that I’d left them hanging with Shoal Creek, and they wanted to know how things turned out with Rep.”

Any successful book has to have good guys and bad guys. Both “Shoal Creek” and “Rep’s Return” have them. Rep is the protagonist in both books, and he has a way of coming in conflicts with some really bad people.

“In the real world, not everyone goes to Sunday school on Sundays,” Bledsoe said. “They act and talk like bad people.”

Bledsoe said that some people have told his wife, Karen, that they were surprised at some of the languages in the book.

“They told her that they had no idea I had ever heard language like that,” he said smiling. “I was in the U.S. Marine Corps for five-and-a-half years. At one time or another, I think I heard every cuss word ever invented. You also hear bad language in the workplace.”

Rep’s Return might be called the second chapter of the Shoal Creek saga. It begins with Rep leaving Shoal Creek for life on the road.

He leaves behind a pregnant Lila, who has lost her father and brother.

She struggles to keep the family farm afloat and prays for Rep’s return. Across the Chattahoochee in River Bluff, Star Hobb wants retribution for the deaths of her brothers at the hands of the moonshine runners on the Georgia side.

The story moves from the whiskey stills in Georgia to the small cotton mill town on the Alabama side to the strip joints downriver in Phenix City.

Bledsoe said he likes the challenge of developing central characters, phasing out minor ones and bringing in new characters.

“Writing has been a good experience for me. I have enjoyed it,” Bledsoe said. “I have an editor who helps me a lot. He’s really good at taking what I have written and putting it in its final form. He likes what I write and encourages me to keep doing it.”

It looks like Bledsoe has a book series going. Rep’s Return is on the market when sales of Shoal Creek remain steady. “I’m about 40 percent through with my third book,” Bledsoe said.

Much like the second book, it moves past the cliffhanger ending of the previous book into a new set of challenges. To get a copy, go to lannybledsoe@amazon.com.