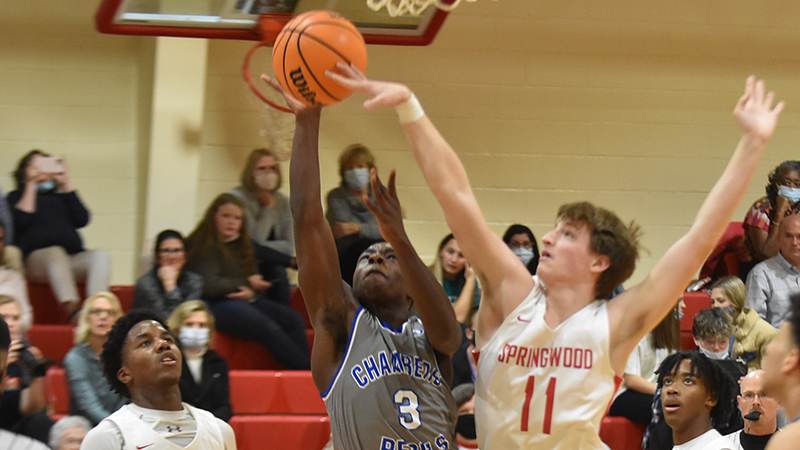 Eleven months ago, the Springwood Wildcats pulled off an upset win against Chambers Academy that went down to the wire. In that game, the Rebels missed crucial free throws that gave the Wildcats a two-point win.

On Monday, the two teams squared off in another tightly contested game, as the Wildcats pulled off an overtime 70-66 win.

“I think it helps that we’ve been there before,” Springwood head coach Lisa Sampson said. “They kept their cool, and they never quit on me. They just have that fight in them, every single one of them. They wanted this win badly. I’m very proud of them.”

With less than 30 seconds left in overtime, the game was tied at 56 and had been back-and-forth throughout the overtime period.

But a foul on an inbounds play gave the Wildcats a chance at the free-throw line. Junior Benji Hull calmly dropped in both shots at the line. An ensuing turnover sealed the game for Springwood, handing Chambers its first loss of the year.

“We didn’t play very well defensively,” Chambers head coach Jason Allen said. “Our goal is to stay in front of you and not let you get the easy stuff. We were late in our help rotation, and we didn’t get in front of the basketball. Springwood has a good team, and they played well. It was a good basketball game. We’ll go back to work. It’s a long season.”

Late in the fourth quarter, Chambers was in a hole. Springwood had the ball with 2:30 left in the game and was content on trying to use up the entire clock and win by six. It wasted about a minute of the clock before Chambers got a steal that led to a quick score and a foul shot. Springwood turned the ball over again about 15 seconds later when a pair of Rebels trapped a Wildcat in the corner. The trap gave Chambers the ball and a chance to tie the game.

“We ratched up the pressure. We wanted to do that earlier, but we were in foul trouble and were missing one of our bench players, so that hurt our depth. We weren’t able to pressure the way we wanted to,” Allen said. “I think if we could have done that earlier that would have helped us more.”

A clutch jumper from inside the arc with seconds left set up an opportunity for Springwood to win the game at the buzzer. With less than 10 seconds left in regulation, Springwood took the ball down court. An isolation play was called, but the game-winning, deep and contested 3-point attempt clanged off the front of the rim.

“I’ve got to do a better job coaching at the end of the game because when we’re trying to work the clock doesn’t mean we’re trying to slow down. That’s what we’ve been doing,” Sampson said.

In overtime, Springwood rarely gave Chambers any good looks at the rim, clogging up the passing and driving lanes. Overall, Chambers scored seven points in the overtime.

The difference in the game was free throws. Springwood made 18 of its 26 attempts, while Chambers struggled at the line, hitting 10 of its 22 attempts.