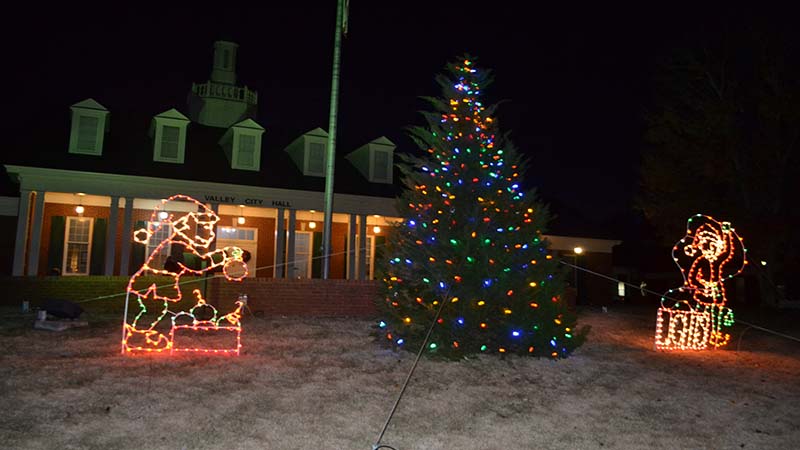 VALLEY — A year ago, the Valley City Council waited several months into the 2019-20 fiscal year before acting to purchase some needed new vehicles for the Valley Police Department. With that purchase taking place just before Covid-19 hit in March, it wasn’t until late summer before the new vehicles arrived.

Not wanting that to happen again this year, the council approved a resolution Tuesday to purchase three 2021 police package vehicles. The Ford Explorer four-door SUVs will be purchased at a price of $31,015 each from low bidder Stivers Ford-Lincoln of Montgomery. The total price of $93,045 is around $4,000 less than last year’s purchase price for three vehicles.

“We thought about going with a different type of vehicle but decided to stay with the Explorer,” Mayor Leonard Riley said.

Riley said that sales tax revenue has been very good for the first two months of the new fiscal year.

In his report to the council, Police Chief Tommy Weldon said his department is currently investigating a homicide that took place Saturday night.

“We send our condolences to the family of Matthew Patton,” he said. “We urge anyone who may have seen or heard something to contact CrimeStoppers.”

Weldon said Valley would soon be partnering with Central Alabama CrimeStoppers. He said it would definitely be an upgrade over the current system.

“They are out of Montgomery and cover a large area of the state,” he said. “They can send text messages on cell phones and have an app that’s easy to access. We are really excited about being involved with Central Alabama CrimeStoppers. They receive tips over a broader area. This gives them a better recovery rate than what we have with our current system.”

He said Central Alabama CrimeStoppers is funded by ADECA grants.

Valley Parks & Recreation Director Laurie Blount told the council that the annual Christmas Merry Go Round began the 2020 season at 5 p.m. Monday. She said the turnout is picking up now that people realize it’s up and running.

“We had a good crowd on Monday and another good crowd when we started today,” she said.

Blount said there’s an added benefit for those who wear face coverings.

“They help keep your face warm,” she said.

There are signs posted at the entrances to the Merry Go Round that anyone not wearing a mask will be turned away, and people are being asked to maintain social distancing.

“This is our 64th year for the Merry Go Round,” she said. “We are glad to be offering it again, but remember to wear masks and to stay six feet away from other family groups. We need to pay attention and protect each other.”

Blount said that the Ballard Party Rentals miniature train and the mechanical bull would be there on weekends.

She also reminded people that the Valleywide Christmas Parade would be taking place on the evening of Thursday, Dec. 10. The deadline to enter is Dec. 8.

“Please get your entries in,” she said. “We’d really like to have some good participation this year.”

In council member communications, Jim Clark thanked Public Works Director Patrick Bolt and his crew for taking care of a problem on 29th Boulevard in Shawmut.

Randall Maddux said he had been getting complaints about noise going to and from the Shawmut boat ramp. He encouraged people with complaints to relay them to Valley Police Department at (334) 756-5200 and get an immediate response.

“They will send out officers to check it out,” he said.

“It’s Christmas, and the season for giving,” he said. “I’d like to hear the mayor give a ‘Roll Tide!’”

The mayor smiled, shook his head and said, “War Eagle anyway. That’s all I have to say.”

As the council members were gathering in the council chamber, Council Member Jim Jones kidded with the mayor if the meeting was “going to be nice, short and sweet tonight?’

After delivering the opening prayer, Jones kidded that he was “going to be as quiet as a church mouse” until the meeting was over.

Patrick Bolt had the honor of turning on the lights. Riley kidded him a bit by crediting him with a nice special effect. By coincidence, a street light on nearby Fob James Drive was flashing on and off, creating an on-again, off-again illumination of the lawn in front of city hall.

“We have had a good year,” Riley told council members. “We couldn’t have done this without your support. I was down at John Soules Foods today. There’s a whole lot of activity going on down there right now, and that’s something very good for our community.”

Headquartered in Tyler, Texas, John Soules Foods is the nation’s No. 1 producer of beef and chicken fajitas. The company will open its third production facility off Towel Avenue in Valley next July. When the local plant is in full production several years from now, it’s expected that there will be three production lines and over 500 employees.