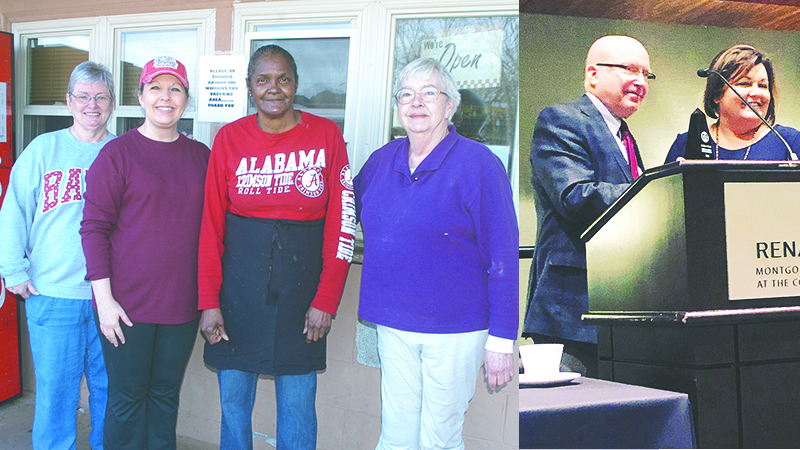 Left, Daniel’s Drive Inn celebrated 70 years in Valley in March. Right, Valerie Gray, executive director of the Chambers County Development Authority, is presented with the David R. Echols Distinguished Service Award, which is given to the most outstanding economic developer in the state. Gray won the award in January.

EDITOR’S NOTE: This is the first in a four-part series looking back at the year 2020.

As hard as it is to remember that far back, the first Valley Times-News published in 2020 actually had rising flu cases as the main headline. There were 233 confirmed cases of the flu at EAMC and EAMC-Lanier emergency departments and 26 patients with the flu or flu-like symptoms were hospitalized. The hospital put visitor restrictions in place, effective immediately.

Williams honored as deputy of year

In its first meeting of the year, the Lanett City Council awarded a contract to build a new airport terminal and agreed to purchased eight acres of land bordering the airport site. It was the first of many airport-related decisions the city made in 2020.

Gladys Rosalyn McCauley, who owned and operated the Roz House of Tax for five years, was sentenced to 46 months in federal prison. Prosecutors with the U.S. Department of Justice claimed that McCauley made numerous false claims to the IRS, resulting in the loss of an estimated $1.5 million to the federal government.

Valerie Gray, Executive Director of the Chambers County Development Authoriy was awarded the 2019 winner of the David R. Echols Distinguished Service Award, which is given to the most outstanding economic developer in the state.

Herman Charles Brown died in a home fire off of County Road 190 in Chambers County. Neighbors said Brown loved to play the guitar and sing and was friendly.

Daniel’s Drive Inn celebrated 70 years in Valley in February. The business was started by Ethel Daniel, the grandmother of current owner Becky Nelson.

East Alabama Medical Center reported it had at least seven multi-disciplinary meetings regarding COVID-19, just in case the virus ended up in Alabama. The hospital had participated in conference calls with the Center for Disease Control, the Alabama Department of Public Health and the Alabama Hospital Association.

Brothers Jacary Atkinson and Clarence Heard held a ribbon cutting for their business, da Grub Spot, in LaFayette. It’s located in the former Kentucky Fried Chicken/Newt’s building at the intersection of US 431 and Highway 50.

Local stores sell out of hand

Although COVID-19 had not yet impacted Chambers County, hand sanitizer and other disinfectants were almost impossible to find on store shelves in early March.

Ismar Odil Hidalgo Martinez, 46, was killed in West Point near Pearl Street. The incident was investigated by the Harris County Sheriff’s Office.

Riley calls out the school system

Mayor Leonard Riley went on a rant about the state of the Chambers County School System in March. Riley noted that the highest per-pupil spending was at schools at the northern part of the school system, while schools in Valley were at the bottom. He also said there were serious discipline problems at W.F. Burns and Valley High. Hodge responded with a 716-word press release on March 20, comparing her time as superintendent to Rileys and going point for point with Riley’s accusations.

Chambers County School Superintendent Kelli Hodge released a statement in March saying the school system was monitoring the COVID-19 situation based on guidance and information from the Centers for Disease Control, the Alabama Department of Public Health and the Alabama State Department of Education.

Gov. Kay Ivey declared a state of emergency and shut down public schools in Alabama for two and a half weeks after the state reported its first cases of COVID-19. “Folks, let’s take a common-sense approach and remember calm and steady win the race,” Ivey said.

“Alabamians should not be fearful but instead use common sense to watch out for ourselves and others.” In Georgia, Troup County Schools initially elected to close from March 16 through March 27. None of the schools reopened.

The COVID-19 pandemic started impacting businesses quickly in the United States. Restaurants weren’t closed for in-person dining yet, but by March 18, the playplace at the McDonalds in Valley had closed.

The first case of COVID-19 in Chambers County was documented on March 19, according to the Alabama Department of Public Health.

The state had 75 cases at that point. Gov. Kay Ivey also ordered the closure of beaches and made restaurants takeout only on the same day.

The Alabama Department of Public Health confirmed a second positive case of COVID-19 in Chambers County, and East Alabama Medical Center asked people to shelter in place outside of necessary movement. Valley and West Point also declared states of emergency. Lanett declared a state of emergency a few days later.

Caroline Riley Propes, 19, was arrested after a 14-month investigation by the Troup County Sheriff’s Office into the death of a baby that was found in a cooler on Jan. 6, 2019. Propes, of Newnan, was charged with murder in the second degree.

The baby was only a few days old.

Chambers County was hit extremely hard in the early going of COVID-19, with five of the first dozen or so deaths taking place in Chambers County.