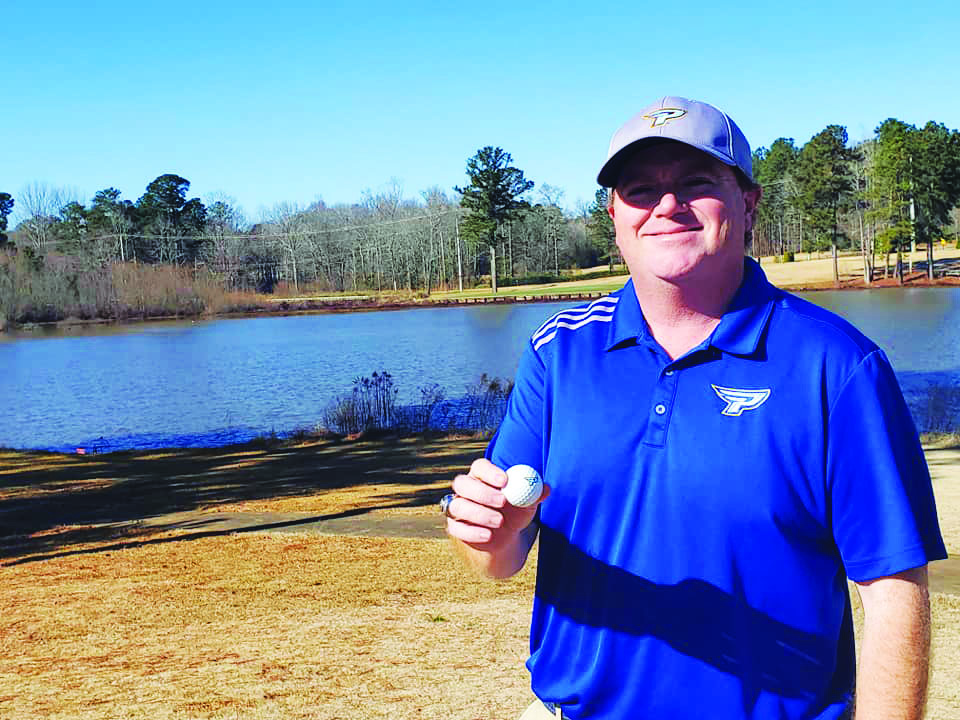 These are good times for the Point University men’s golf program.

Under the direction of head coach Steven Paine, the Skyhawks have become a national powerhouse, and they finished the fall portion of their 2020-2021 season having won a remarkable nine consecutive tournaments, and they ascended to the top of the NAIA national rankings.

Paine, having helped Point achieve such an impressive level of success, is ready for a new challenge, and he has joined the coaching staff on Mississippi State University’s golf team.

The man tasked with keeping the Skyhawks on top is Shannon Lipham, who has been named the director of golf for the Point men’s and women’s golf programs.

“My dad (Lamar Lipham) always said timing is everything,” Shannon Lipham said on Tuesday afternoon in his office at the Point University Golf Club in Lanett. “Timing’s pretty good when you step into a situation like I have taking over the number one team in the country. You have to give coach Paine all the credit in the world for this team that he has put together.”

The partnership between Paine and Lipham yielded exemplary results.

Since the fall of 2018, the Skyhawks have won two Apppalachian Athletic Conference championships, and twice they qualified for the NAIA national championship.

The 2019-2020 season was cut short because of Covid-19, and at the time the Skyhawks had won four straight tournaments.

The Skyhawks were able to begin competing again last fall, and they picked up where they left off, winning five straight tournaments, including the NAIA National Preview, which brought together many of the country’s elite teams.

Lipham was grateful that the NAIA, the conference, and the school decided to go on with the season, giving the Skyhawks an opportunity to keep winning tournaments.

“We told them last fall, enjoy what you’re doing, because there’s a school (LaGrange College) 10 miles away that’s not competing. There are Division I schools that aren’t competing,” Lipham said. “So, it was important for us to be able to compete. We’ve been fortunate. The NAIA, and our conference, it’s not like they’ve had a hands-off approach, but they’ve done it a little differently than the NCAA, and it’s worked.”

The spring portion of the schedule begins on Feb. 15, and Lipham is hoping to have his full team in place by then.

Most of Point’s top players are from South Africa, and at the moment they’re unable to travel to the United States because of Covid-19.

Once the Skyhawks are at full strength, they figure to be hard to beat with so many top-flight golfers, including number one player Ruan Pretorius, one of seven South Africans on the team.

The other regular members of the lineup are Eric Wowor, Ryan van der Klis, Cole Stevens and Trevor Poole.

While Poole is from Smiths Station, the other four top players are from South Africa.

“If everything holds true, we’re going to have four All-Americans, and our number five player is pretty dang close,” Lipham said.

Paine is from South Africa, and that connection helped him attract elite players from his home country.

It took a few years, but once Paine got everything in place, the program was off and running.

“It took him three years to get them competitive,” Lipham said. “He had a couple of guys from Portugal, one of which was an All-American, and that kind of laid the groundwork. Then, he started that South African connection, and it’s just gotten better and better every year.”

Lipham’s task, which he feels is aided by his familiarity with the school and the players, is to build on what Paine has been able to do.

“I don’t know how I’m going to be able to fill Paine’s shoes,” Lipham said. “On a small-college golf level, it’s like replacing Nick Saban, because he’s won so much. Fortunately, I know the kids, and I have a great relationship with them.”

Considering the state of the program, Lipham figures it’ll be mostly the status quo.

Lipham believes Point University is a selling point, and that includes the school’s golf facility that is a few miles from campus.

“That’s our main recruiting tool,” Lipham said. “Georgia, Auburn, those schools have their own facilities. They have endless budgets. For us to have this two miles off-campus, with an indoor putting facility, and we have locker-room facilities for our guys and our girls, and an 18-hole golf course, we are extremely fortunate.”

Lipham, who was a golf standout during his time at Troup High, was a member of the Jacksonville State University golf team from 1995 to 1999, and he graduated in 2000 with a bachelor’s degree in communication.

Lipham began his coaching career during the 2004-2005 season when he was a member of the golf staff at Berry College.

After one season at Berry, Lipham took on the challenge of re-starting the golf program at Georgia Southwestern University, and he was at the Americus school for one year.

Lipham spent seven years as the assistant golf professional at Callaway Gardens before he got the opportunity to return to college coaching.

“It took me a long time to get back (into college coaching), but it worked out in such a good way for me,” Lipham said.

One of Lipham’s number one supporters of the years was his father, Lamar Lipham, who sadly died last summer.

“When I was at Jacksonville State, I didn’t know what I wanted to do,” Lipham said. “My junior year at Jacksonville State, (Lamar Lipham) got back into coaching (at Callaway High). I’ve been in the locker room with him. I’ve been in the weight room, at practice. I thought, this is where it’s at. So, I realized at that point, this is what I want to do, and I got into coaching.”

Lipham knows his father would have been happy to see his son get this chance.

“I wish he’d been around to see the last couple of days,” Lipham said. “He got me into it.”

Lipham is also appreciative of his wife, Jennifer, for her patience and support of an unconventional vocation.

“I’ve got to give her all the credit in the world,” Lipham said. “She tolerates me traveling 10 or 12 times a year.”

At the moment, Lipham is busy getting the team ready for the start of the spring season in about six weeks.

If the South African golfers aren’t available, Lipham still likes what he has, although he would clearly prefer to have the team operating at 100 percent efficiency.