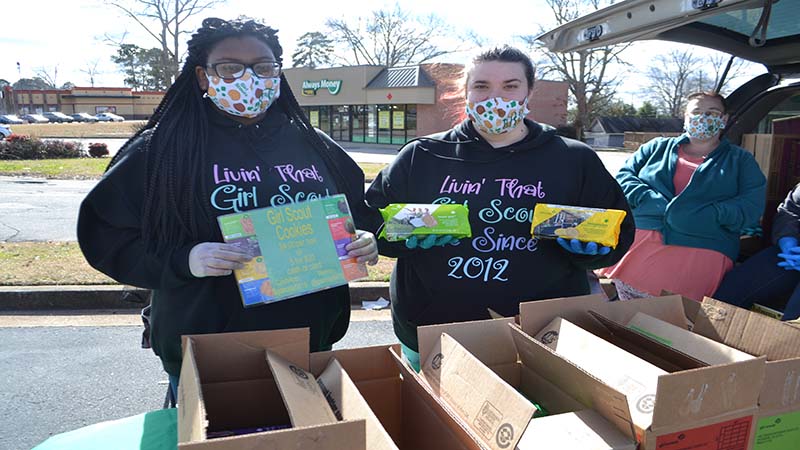 VALLEY — With the arrival of a new year comes another season of local Girl Scouts selling cookies. The popular spot in recent years has been the corner of 20th Avenue and 30th Street in front of the Circle K store. Various troops will be there on Friday, Saturday and Sunday afternoons selling boxes of the ever popular Peanut Butter Patties and Peanut Butter Sandwiches along with Caramel DeLites, Lemonades, Short Bread, Thin Mints, and S’Mores. Debuting this year are the Toast-Yays! They taste a bit like French toast, and the cookies are made in the shape of a piece of sliced bread. Each cookie is dipped in icing.

This past Saturday, senior scouts from Troop 5018, Valley, had a booth set up on the corner of 20th and 30th and were doing quite well in their cookie sales. Kaelynne and Kate-Lynne have both been in scouting for eight years. They started out as Junior Scouts, later became Cadets and are now Senior Scouts. Both are juniors at Valley High, and their goal with the cookie sales is to earn enough money to be on a trip to New York City their senior year.

Melissa Borders and Carolyn Reaves are their troop leaders.

“We will be here with the girls from 4 to 6 p.m. on Fridays, most of the day on Saturdays and from 2 to 4 on Sundays,” Borders said. “We will be selling cookies through March 3.”

The Girl Scout motto is: “Girl Scouting builds girls of courage, confidence and character, who make the world a better place.”

Scouting encourages STEM education, teaching girls to be prepared for the future. Scouting provides girls opportunities to love nature and to seek adventure, and it provides them a means of learning the life skills they will need to be successful. The cookie sales will help them acquire a sense of entrepreneurship — the business smarts that will let them take on the world.

The first known cookie sale by Girl Scouts was done by the Mistletoe Troop in Muscogee, Oklahoma in December 1917 at their high school. In 1922, the Girl Scout magazine, The American Girl, suggested that local troops could have cookie sales as fundraisers. A movement grew into commercial sales by the 1930s, and bakers were hired to make a standard line of cookies. An estimated 70 percent of the proceeds from the sales go to promoting scouting in that area with 15 percent going to the group making the sales. It’s estimated that more than 200 million boxes are sold nationwide every cookie-selling season. Each season generates an estimated $800 million with at least $600 million being distributed among the troops.

The annual sale of Girl Scout cookies is a big business with the lion’s share of the money being raised going to the benefit of scouting and the scouts.