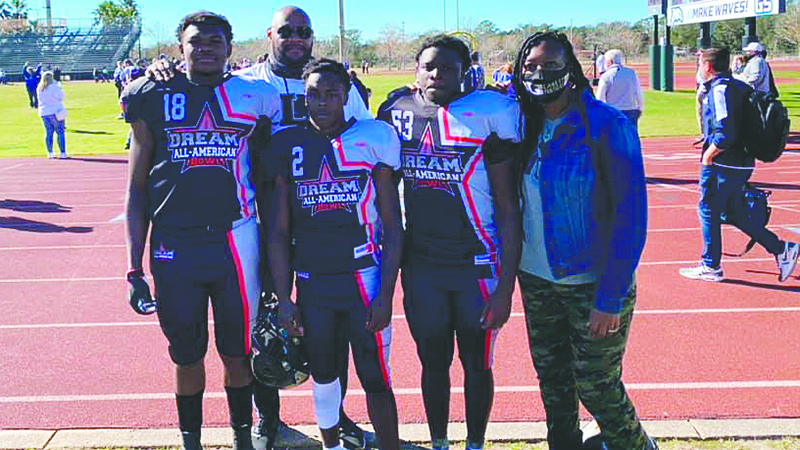 “It was a good experience for me to get outside of Lanett and experience different people and different things,” Abner said. “I felt like I got better over the weekend. I learned new things like route running, cuts and that type of stuff. It felt good to be back in my shoulder pads again.”

“The experience was great, just getting to meet new people from all around the country, and practicing for a few days,” Herston added.

Players from roughly 15 states had a chance to play in the DREAM All-American bowl. For the three Lanett players, it was a good opportunity to showcase their talents against top-notch players from around the country, not just the state.

“Usually, when you play in a high school game, there’s usually only a couple of players that want to make it [to the next level], but playing in the All-American game, you’re playing against people that want the same thing, playing at the next level. It was really fun. It really showed me how good I was with my performance against people that were probably better than me, but I showed my game and where I’m from.”

The three Lanett players played on the Dream team, which defeated the Stars 24-21.

Abner played tight end and receiver, finishing with two catches for 77 yards. Zachery finished with two pass deflections and more than nine tackles as a middle linebacker. Hurston played running back, receiver and cornerback while also returning a punt. He finished with one pass deflection, six carries for 50 yards and a kickoff return for 30 yards.

Along with their individual statistics, Lanett had a good weekend, as Zachery was named the defensive captain.

“It felt like I was getting my name called for the draft or the Heisman Award,” Zachery said. “During the practices, I was playing hard, but because I go to Lanett, we practice 100 percent, so I’m just used to practicing like that. The coaches thought that was good.”

Both teams’ staffs were made up of successful college and high school coaches and a couple of former NFL players. Joe Horne, who played for the New Orleans Saints for the bulk of his career and Matt Bryant, who was a long-time kicker for the Atlanta Falcons, were two of the notable former players helping out with the game.

“It felt good meeting the coaches,” Abner said. “I got to meet some players that played at some big-time colleges. My receiver coach played at South Alabama and UAB, so he taught me some good stuff.”

All three of the players have at least one college offer to continue their football careers, and Monday was the final time they’d play together.

“It felt like a dream come true,” Zachery said. “We’ve been talking about it since we were five years old. We wanted to be basketball players, and we just stayed together. We always used to play a basketball tournament in Gulf Shores. For us to be down there one last time, it really felt good.”

Zachery is the only player of the three that has already committed, as he committed to Faulkner earlier in January.