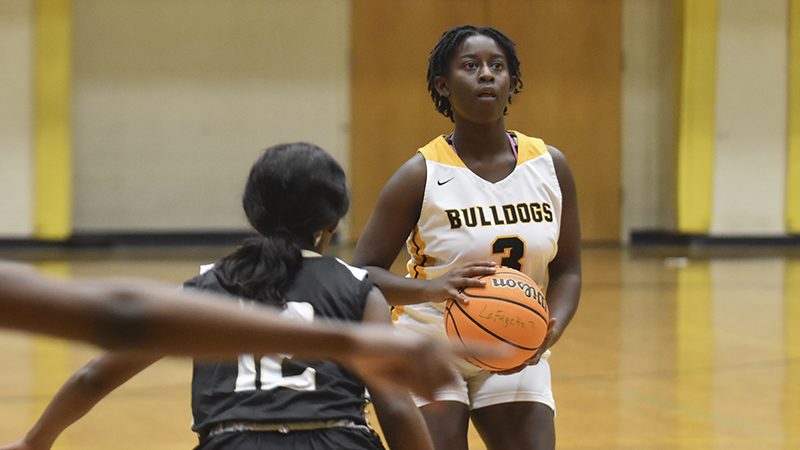 LaFayette senior Ebony Williams eyes the rim before pulling up for a three-point attempt in the Bulldogs win against Dadeville. --File Photo

For the past two years, the class of 2021 has been huge playmakers for the LaFayette girls basketball team. Feliah Greer gets most of the attention, but Ebony Williams has been a spark plug for the team. Now a senior, Williams has taken her game to the next level, keying in on defense while still being a leader for the team.

“I just try to come out and give my team what I need to bring,” Williams said.

Williams is the Bulldogs’ most consistent weapon outside the arc, usually finishing a game with one or two made threes. But one of the most noticeable parts of her game is the energy she brings.

Williams is the most animated player on the LaFayette 2020-21 roster. She’s constantly talking on the floor and will even make faces while dribbling the ball down the floor or while shooting a free throw. After a big shot beyond the arc, she usually runs down court with three fingers in the air.

“In games, we’ll be getting frustrated trying to come up, and I just try to keep the team uplifted,” Williams said.

Early in the year, Williams has shown that she can do more than be an outside shooter. She has worked hard on being an all-around player. Along with Greer, Williams is a primary ball handler and has put in obvious work on her ability to drive through the lane in traffic. However, she is more proud of her defense this year.

“Defense has been my biggest step,” Williams said. “I’ve always had that shooting potential, but defense wins games. Stepping up defensively, I’ve seen a lot that I can bring to the team this year. I like being able to compete with the other team and tell them to give me the ball. I like getting inside their head and get them off track.”

Her ability this year to step up, lead and play defense isn’t lost on her head coach.

“She’s become more of a leader,” head coach Fred Bridges said. “Her ability to be able to lead and take the team in the right direction where we want to go. Up to this point, Ebony has been just a pure leader for us. She’s like my eyes when I’m standing on the sideline. I’m able to build trust in her.”

Last season was Bridges’ first year as LaFayette’s head coach. He preached defense and Williams has bought into his philosophy.

“That speaks volumes for Ebony as a player and young lady, for her to buy in to what we’re trying to accomplish as a team,” Bridges said. “The ultimate goal is to try and win a championship. The old analogy goes  ‘defense wins games,’ so that’s what we’re really focused on right now.”

Bridges said Williams’ step in leadership is because she had become more of a student of the game, enjoying the process of practice and watching film than even a year ago.

“It’s going to be hard to replace Ebony Williams,” Bridges said of when she graduates.