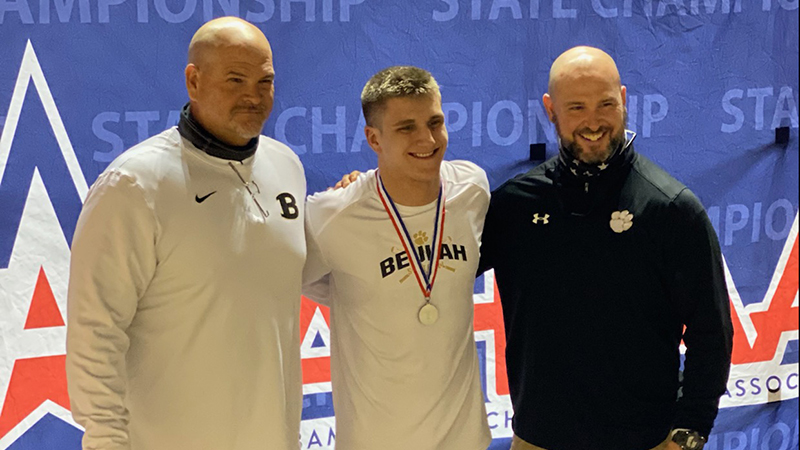 Blain Hines went the distance in his final year of wrestling, but the senior came up short on Saturday, losing in the 152-pound weight class of the 1-4A AHSAA High School Wrestling Championships on Saturday.

While he finished second in the state, Hines is the first Beulah wrestler to ever make it to a state championship. He was also the first Bobcat to reach a state semifinal.

“Looking back on it, it makes me think of the story of David and Goliath. David didn’t really know what he was getting himself into, but he did what he had to do,” Hines said. “Looking back on it, it just shows an eighth-grader going up against seniors and older guys, that is just a big learning experience. You just work from there and you learn and just keep on working.”

Hines started wrestling as an eighth grader, facing off against people four or five years older than himself. During his five-year high school career, Hines learned how to grow up through a lot of the lessons he learned through wrestling.

“Truly, it’s been emotional but also great. You learn a lot of things,” Hines said. “Wrestling teaches you a lot about manhood, discipline, respect and having self courage. There were a lot of teaching moments for me.”

Hines said the biggest lesson wrestling taught him was manhood, since he had to rely on himself on the mat.

“There are only two people on the mat, and there isn’t anyone there to save you,” he said. “It’s you and that other person.”

COVID-19 has been tough on all sports and schools throughout the country this year, but Beulah has been the hardest-hit school in the Greater Valley Area. The school has had numerous student-athletes out either on quarantine or due to the illness several times this year. Beulah was scheduled to have one home tournament this year, but it was canceled due to a sudden outbreak.

“It really was a struggle because you’d be ready for a match, then the next thing you know it would be canceled,” Hines said. “We didn’t even know wrestling was going to be a guarantee this year, so with this being my last year, I’m grateful that we did have it. During the pandemic, we stayed motivated. We stayed with it, and we got the job done. We practiced, even if we didn’t have a match. We knew that we had greater goals than we did in past years, and we wanted to get the job done.”

COVID-19 didn’t slow the Bobcats down, as Hines and fellow senior Jacob Sellers both advanced far into the state tournament and made an impact at the state level.

“With us both being seniors, we knew that we had to leave it all out on the mat,” Hines said. “With us being there and what was being on the line, we wanted to be great. We drilled repeatedly. We just went in and put work in.”

After graduating from Beulah in May, Hines plans to go into nursing.