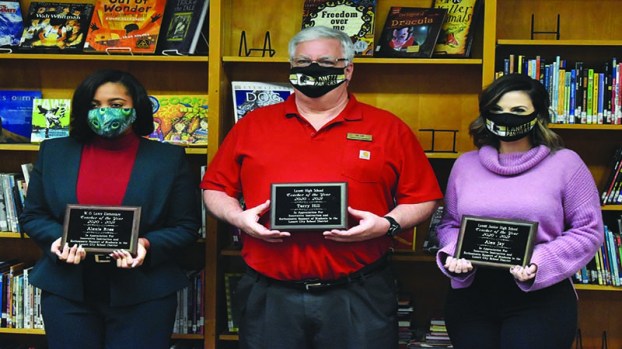 At Monday’s school board meeting, Lanett City Schools announced its 2020-21 Teachers of the Year at its three schools.

Ross, a Lanett alumna, is a fifth-grade teacher at W.O. Lance and is in her second year working for Lanett City Schools.

“I actually observed her [on Monday], and she captivated the students,” W.O. Lance Principal Donna Bell said. “They were all actively engaged, which is one of the things that I look for. She had them using their crayons or highlighters while making summaries on a passage they had read. I am very thankful that I have Ms. Ross on my team.”

Since January, W.O. Lance has started an afterschool reading program, and Ross was one of the first teachers to sign up to lead it.

“I have been here three weeks or so, but since I’ve been here, Ms. Jay has been very helpful,” Lanett Junior High Principal Ke’Undra Dudley said. “The kids love her, and I can tell that just of what I’ve seen in her classroom — which if you haven’t been in there is very inviting and very warm — she’s very passionate about what she does, and it spills over into our kids.”

Recently, LJHS had a peer remediation session, where students were being tutored by other students along with teachers. Jay was one of the teachers that helped lead the session.

“Ms. Jay was very instrumental in doing that with me,” Dudley said.

Hill, who has been with the school district for 12 years, is a math teacher, teaching Advanced Algebra 1, Algebra 1 and Algebra 2. “I am very happy to announce Mr. Hill as our teacher of the Year for our high school,” Lanett High School Principal Bryant Lumpkin said. “I think he was very surprised to get this award, and I don’t know why. Mr. Hill is a teaching machine. If you’re ever in the building during the day, he’s going to teach from bell to bell all day every day. He’s going to be messaging you on schoology on Friday night, Saturday morning and Sunday afternoons. He does a really good job with the kids.” Lumpkin brought up the fact that in August LHS teachers had to come up with a new way to teach students due to the fact Lanett started online, and Hill adjusted to the new way of teaching quickly and without any complaints. “Mr. Hill took it in stride and he learned a lot,” Lumpkin said. “He was able to help his fellow colleagues out and make the whole school function better. As a faculty, I can’t be any more proud of everyone, especially Mr. Hill. Mr. Hill, your passion for teaching does not go unnoticed.”

WEST POINT — The New Horizon Community Theatre brought a belated close to its 2020 season Saturday night with a... read more