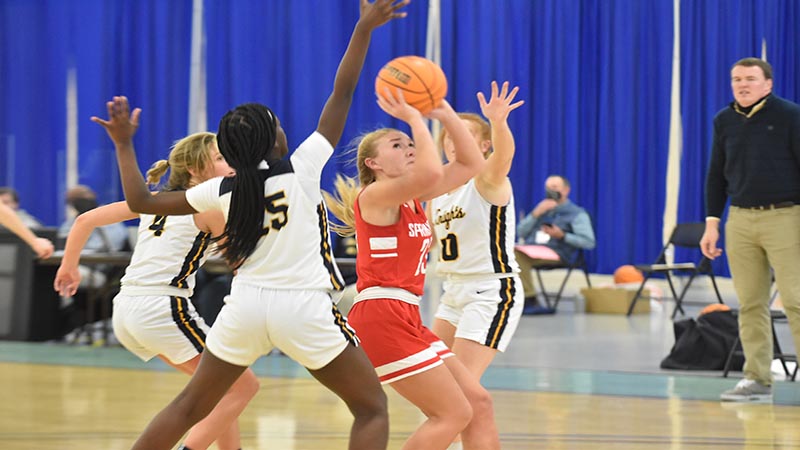 For most of the first half, the Springwood girls basketball team was in a fight with Tuscaloosa Academy. The Wildcats were holding their own against No. 4 ranked Tuscaloosa, even leading early in the second quarter. The difference in the game was the start of the second half. Tuscaloosa Academy dominated the quarter, while Springwood couldn’t score, leading to a 40-33 loss in the AISA AAA state quarterfinals.

For most of the first quarter, Springwood was playing well. The Wildcats were moving the ball well and getting up shots while controlling the tempo of the game. Though the shots weren’t falling regularly, the Wildcats were getting chances, something that they have struggled with this season. They were also getting inside the paint, drawing fouls.

Defensively, Springwood was making it tough for the Knights around the perimeter. Whenever they would get inside, the Knights would struggle to retain possession of the ball.

“We talked about being the underdog, you have to hit them in the mouth early,” Springwood assistant coach Michael Jenkins said. “[We also talked about] just being confident and being the aggressor. I feel like a lot of times, we wait for other teams to set the tempo of the game. We want to be the team that hits them in the mouth first. We came out with energy, and we told them to be the first ones on the floor, be the first one to get a rebound or a steal. It helped us stay in the game and gave us a little bit of confidence.”

Three minutes into the game, Springwood led 4-0, then the Knights started to get into a rhythm. Tuscaloosa scored 10 of the final 12 points in the quarter.

Springwood continued to play tough in the second quarter, taking an 11-10 lead early in the quarter. With four minutes left in the half, Springwood was hanging in the game, trailing by just three points. But the Knights showed why they were a No. 1 seed in the following possessions, quickly scoring five consecutive points to give themselves an eight-point lead, a lead that would continue into the half.

During the run, Springwood struggled to play defense without fouling, as the Knights scored most of their points from the free-throw line to finish off the first half.

“Midway through the second quarter, we started reaching and got a little bit lazy, complacent and struggled with our decision making,” Jenkins said. “It was just little mental errors that, when you’re playing a good team in the elite eight, you need 32 minutes of really good basketball. Those mental errors started to build as the half ended. It just kills you.”

Though it was down eight at halftime, Springwood had a lot to build on entering the second half, but when the third quarter started, Springwood was out of its rhythm. It struggled to break Tuscaloosa’s press, turning the ball over several times in the backcourt. When it would break the press, Springwood struggled to get looks at and around the rim, usually having to take a tough shot inside or settle for a jump shot, both of which failed to stop the run.

Tuscaloosa outscored Springwood 8-0 in the quarter.

Springwood’s scoring drought lasted two minutes into the fourth quarter. Once that first shot fell, Springwood got into a rhythm and started to make shots.

“Before the game, we said it’s big girl basketball time and you have to give it your all. You should be able to walk off the court and say that you gave it your all,” Jenkins said. “In between the third and fourth quarters, I looked at the girls and said ‘I don’t think we’re giving it our all right now. Win or lose, we’re going to be proud of our effort.’ They just took it and played hard. You can’t try to turn it up in the fourth quarter. You have to be able to go out and play all four.

Springwood cut the 16 point deficit to eight points with two minutes left to play. The Wildcats had allowed just five points in the quarter and were capitalizing on Tuscaloosa mistakes.

Eight points was as low as the lead got, as the Wildcats ran out of steam in the final two minutes.