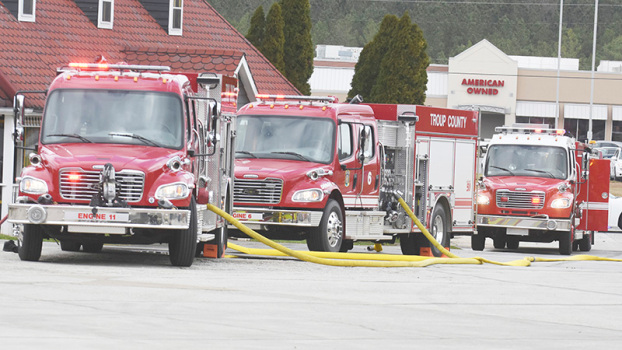 EDITOR’S NOTE: Check back for more on this developing story.

The Troup County Commission voted Thursday to send Hogansville 90-day notice that it will pull fire services from the city, if no Service Delivery Strategy is agreed to.

It was the latest discussion in a SDS discussion that has gone on for over six months and will result in the loss of state grants, if nothing changes by the Feb. 28 deadline. Without an extension before that date, it’s likely that the Department of Community Affairs will impose sanctions because DCA requires a 30-day review window.

The county and Hogansville have an intergovernmental agreement for fire services, and it outlines that Troup County provides fire services to the city. In that agreement, it details that any end of contract must be provided through 90 days-notice, and the commission unanimously voted Thursday to provide that notice over fears it may not be able to afford to provide that service if the SDS agreement isn’t signed.

County Attorney Jerry Willis made the recommendation, noting that the county pays about $600,000 in operational costs for the county fire station in Hogansville. Under the current SDS, Hogansville provides around $237,618 for those services. Under the proposed SDS — which has been agreed to by LaGrange and Troup County — that cost would lower to around $195,000.

Hogansville voted to approve the SDS proposal after the county agreed to lower its fire services bill, but only authorized Mayor Bill Stankiewicz to sign it if all four entities agreed. Stankiewicz then vetoed that bill entirely. West Point has not taken a vote and is prepared to go to mediation, per discussion at Tuesday night’s city council meeting. Mediation is the next step if no agreement is reached.

“We provide the fire service agreement to Hogansville only because we have an intergovernmental agreement between unincorporated Troup County, this body here [the commission] and the city council of Hogansville. Without that, the unincorporated body of Troup County, this board, would have no authority to set foot in the city limits of Hogansville to provide fire services,” Willis said. “In fact, it goes against the Constitution.”

Willis warned the commission that if they waited to provide the notice that there might be a day further down the road where they couldn’t afford to continue fire services in Hogansville and would still have to give 90 days notice.

“If we move forward without this thing being inked, there is uncertainty. Where do we get the $400,000 to supplement the city of Hogansville?” Willis said. “Quite frankly, we get it from the two largest tax bases. That’s the city of LaGrange and unincorporated Troup County. If we don’t reach an agreement, there might come a point in time where unincorporated Troup County doesn’t have the money to augment $400,000 for the citizens of Hogansville.”

The notice would be sent Friday and would be rescinded if a SDS agreement is signed.

“What you’re saying is, if this thing holds, Hogansville is going to have to come up with their own fire department,” asked Commissioner Lewis Davis.

Willis said that the city would become responsible for its own fire services. Commission Chairman Patrick Crews noted Hogansville could sign another intergovernmental agreement with another county.

“They have the responsibility to provide fire services of the citizenry of Hogansville,” Willis said. “We have been doing it only because there’s an intergovernmental agreement between unincorporated Troup County and Hogansville to provide it.”

When called after the meeting, Hogansville Mayor Bill Stankiewicz said he’d already heard about the vote.

“I’m not going to give you my reaction because you couldn’t print it,” Stankiewicz said. “The first thing I’m going to tell them is to move their fire station off my land.”

Over the past few weeks, Stankiewicz said that West Point and Hogansville agreed to work together on the SDS agreement, and he believes Hogansville got a better deal because of it.

On Thursday, he said that he hopes it never gets to a point where Hogansville is left trying to create a plan for fire services.

“if they do that to us, which they have the right to — we have a contract with a 90-day notice clause — if they do that, all bets are off,” Stankiewicz said. “You can quote me — I’m trying to keep myself from saying something I’ll regret.”

The SDS ensures that citizens aren’t being double taxed, where they are paying two entities for the exact same service. It’s required by the state for all 159 counties and outlines the delivery of government services in a cost-effective manner to citizens.

It comes up once every 10 years and requires that the largest municipality (LaGrange), the county, and half of the remaining cities (in this case, Hogansville and West Point) agree. Therefore, with LaGrange and the county in agreement, only Hogansville or West Point would have to sign the proposed SDS.

The county also approved Thursday a 45-day extension to the current SDS. If all four entities agree to an extension before the Feb. 28 deadline, it would give more time to agree and prevent sanctions from the Department of Community Affairs for missing the deadline.

Sanctions include the loss of government grant funding, though it typically would impact new grants or renewals of grants, per DCA’s Jon West.

The city of LaGrange and city of Hogansville passed extensions of 90 days on Tuesday. It wasn’t immediately clear if they’d change course and agree to the county’s 45-day extension. West Point Mayor Steve Tramell said his city is in favor of a 90-day extension, but not 45 days due to DCA requirements.

The parties have already had one extension due to COVID-19. The original deadline in October was moved to Feb. 28 by DCA, according to discussion in the county commission work session Thursday.