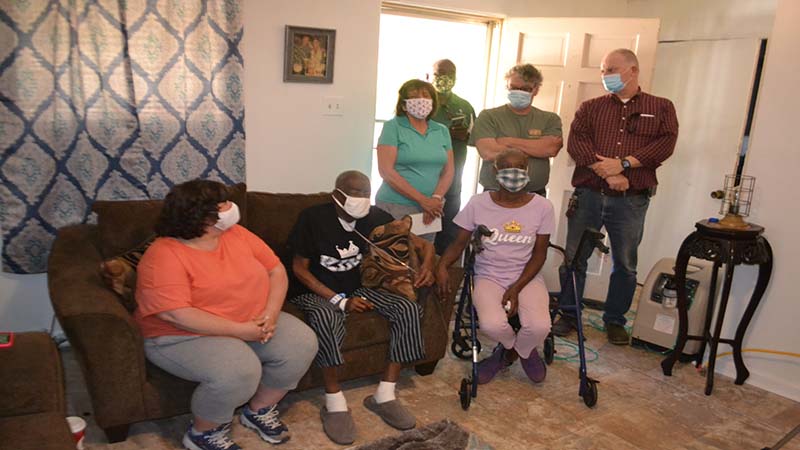 WEST POINT — A wish came true this week for Paul Truitt, and it was a lot more than he’d hoped for.

Truitt and wife, Irene, live on Avenue M across East 10th Street from Bethlehem Baptist Church. He’s 72 years old, a retired handyman and is struggling with stage 4 brain and lung cancer. Not wanting to spend his final days in a house with a badly leaking roof and a rotten kitchen floor, Truitt reached out to Mayor Steve Tramell to see if there was any help available for him and Irene.

Tramell told him to call Kim Roberts at the Chattahoochee Fuller Center Project to see if there was something the CFCP could do. He did and help was on its way.

“He talked to me about his wish,” Roberts told The Valley Times-News. “He told me that he wanted it to stop raining in his bedroom and to be sure Irene wouldn’t fall through the kitchen floor when he was gone.”

Roberts was profoundly touched by the request and set in motion a plan not just to fix the roof and the kitchen floor but to give the Truitts a fully furnished home. Roberts put out the word that an elderly couple in West Point was in urgent need of help from the community. It all came together in just a few days.

“It was both an adventure and a blessing at the same time,” Roberts said.

The first task was to repair the roof and the kitchen floor. Pablo Ambrocia and his nephew did a complete roof job in just two days. The kitchen floor was rebuilt on a similar schedule.

The help from the community started pouring in.

“We got them a new refrigerator and stove, a hot water heater and a washer and dryer,” Roberts said. “We replaced all the wiring in the kitchen and put in new hook ups for the appliances. We put in new cabinets along with a new table and chairs.”

The project at 907 Avenue M started last Saturday and was finished on Monday.

“We worked 10 to 12 hours a day for a little more than a week,” Roberts said. “We are so pleased we were able to make Mr. Paul’s wish come true. He has lived here for years. His parents bought the house from the Skinner family years ago.”

Flipping the house didn’t end with the like-new kitchen and new roof.

“We got new curtains for all the windows and painted the living room and the bedroom,” Roberts said.

“I am so happy today,” Truitt told a crowd gathered for a home dedication ceremony on Tuesday afternoon. “They fulfilled all our needs. I would have been happy just to have gotten the roof fixed and to know the kitchen floor wouldn’t be caving in. But everything else that was done — I can’t believe it.”

Next door neighbor Shirley Jackson brought over a large hanging basket to add some color for the house warming.

She said the transformation of the house was remarkable and that the Truitts were deserving of it.

“Paul was a handy man in his day,” Irene said. “He could do a little bit of everything from carpentry to plumbing and was good at it. He had started fixing up our house when he got sick. We are so grateful for this help. Through the Fuller Center, God is sheltering us in our need.”

Irene is amazed at her new kitchen. The new electric stove she has replaced a wood-burning stove they’d previously used.

The Truitts were appropriately dressed for their big day. Paul wore a shirt saying “King” and Irene wore one saying “Queen.”

They had good reason to feel like king and queen for a day.

“Kim and (assistant director) Robin (Pierre) are great,” Irene said. “I love and appreciate both of them so much. God has blessed us through them. I can now cook in my kitchen without worrying about falling through the floor.”

“This is amazing,” Truitt said. “We thank everyone from the bottoms of our hearts for what they have done.”

“Our community is family to me,” Roberts said. “It’s all about taking care of people. I promise you I will be visiting you. I would love to have dinner with you in your new kitchen.”

The CFCP will be back in the same neighborhood the first week of October. A legacy build will be taking place on nearby Higgins Street, and two new CFCP homes will be built.