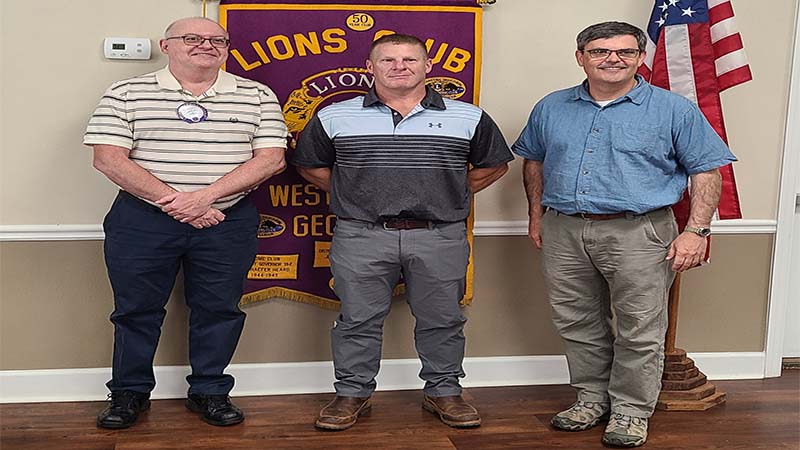 John Soules Food Facility Manager Adam White (center) was the gust speaker at the West Point Lions Club on Wednesday. He spoke about the new plant’s progress and the company as a whole.

In August of 2020, John Soules Food broke ground for its Valley location. Now eight months later, a lot of progress has been done to the plant, which hopes to begin production on Aug. 16.

John Soules Food Facility Manager in Valley Adam White, who is about to complete his first full year with the company, spoke to the West Point Lions Club about the progress of the facility and John Soules Foods overall goal for the area.

“When this plant is fully built out, it will have five lines, at 14,000 pounds an hour. It’s 40 percent bigger than any of the other lines [in Gainesville, Georgia] and will have one line bigger than the Tyler [Texas] plant,” White said.

Valley’s location will be the third facility for John Soules, as the first two are in Tyler, Texas (where the company began) and Gainesville, Georgia.

White said getting the first line open at the Valley location is one of the companies top priorities.

“That spicy chicken product was a 20,000-pound promotional run that my wife is scheduling that Gainesville plant to run four full two-shift days a week right now. It’s not going away for a little while, but it is putting that plant in a seven-day a week run,” White said. “The people don’t like it and John Soules doesn’t want to operate that way, so getting that line three here is the top priority. We have a long way to go.”

COVID-19 has slowed the construction of the plant, especially slowing down the acquisition of equipment from foreign countries. The poor weather conditions for the past month have also slowed the actual building time of the facility, which is located off Towel Drive.

“We’re going to make a good facility and it’s going to be run right,” White said. “That’s one of the reasons I came here. Where I came from [Tip Top Poultry], I could have stayed there another 20 years and retired. I left there because of this opportunity.”

John Soules has been sparing no expense to build one of the most state-of-the-art plants in the country. According to White, the company will have invested $125 million in the plant by the time it’s opened for production.

For example, White said the plant will have HEPA 17 filtered air units, which are what hospitals use in their operating rooms, in the roof of the plant.

“It’s going to take a lot of chicken to pay back $125 million, but John Soules Jr.’s plan, it’s going to be the most automated food-safe facility in the United States,” White said. “They’re not holding anything back.”

Though John Soules is one of the nation’s largest producers of chicken and beef products, the company is continuing to grow. White said John Soules made $30 million profit more in 2020 than it did in 2019, which was previously the company’s most profitable year in company history.

“Every bit of that money, they’re turning right around and sticking it into this plant, trying to get it built,” White said. “They want this facility to run. They want it to be good.”

White informed the Lions Club that the company will soon begin its hiring process, as the human resources manager will begin working at the Lanett airport in the next couple of weeks. When the plant opens, John Soules will employ about 200 people. After the addition of the fifth line, it will employ more than 500 people.

Employees will make between $13 to $15 an hour depending on the job. Maintenance and troubleshooting employees will top out about $38 an hour.

When John Soules and John Soules Jr. were originally making the plans for the new facility, all meetings and meals were held there. After a couple of months grinding through the early meetings, John Soules Jr. decided it was time to get into the community.

“Every few weeks, we’re over here at Pokeys or Coach’s. They wanted to get out in the community,” White said. “I know we’ve donated money to the merry-go-round at Christmas time. I’m sure they’re going to want to sponsor local baseball and softball teams. They want the name out there. If there’s anything out there, let us know. I’ll do what I can to get it done. They’re not against doing it right.”

“The first place I went was the hardware store. That’s where I come from and that’s how you build the relationship locally,” White said. “I can drive to Home Depot in LaGrange or Opelika going 20 miles down the road, but probably get it a little bit cheaper. If I can buy it a mile down the road and pay a couple of extra bucks, it’ll save me time and help. We want to do that. I asked all these questions before I got hired. I don’t like that corporate feel. John Soules is a hundred-million-dollar company, but they still run it like they’re not a corporate company, and that’s the message they want.”