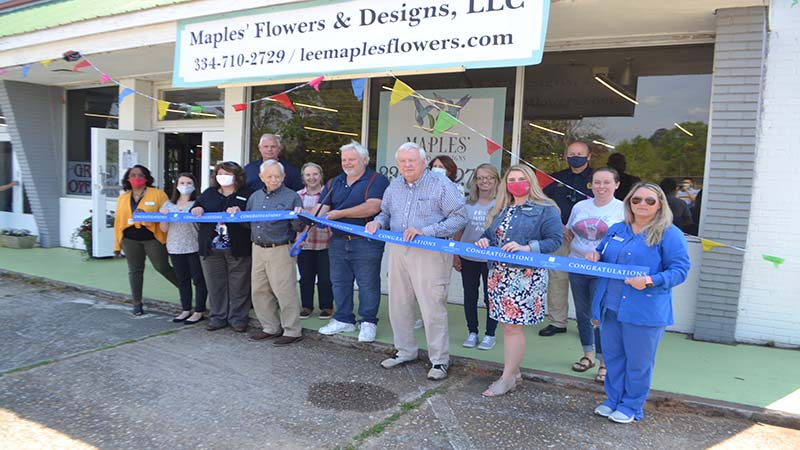 VALLEY — At 11:30 a.m. on Wednesday, the Greater Valley Area Chamber of Commerce hosted a grand opening and ribbon cutting for Maples’ Flowers and Designs and the Fairfax Village Antique Market. The new business is located in the former Taunton’s Hardware building in the curve on Highway 29 just south of Valley High.

“We welcome everyone here today,” said owner Lee Maples. “I am so happy to see this day arrive. We are so happy to have gotten this far.”

The building has undergone a vast amount of work to be where it is today.

“I think the Bermuda Triangle somehow relocated over it, and we had to overcome lots of obstacles,” he said. “There were 65 lights in the store, and only five of them were working when we first got here.”

The one thing that kept Maples going during the many weeks of work he put into getting the building ready was the encouragement he got from the public.

“People would stop and ask what was going on,” he said. “When I told them I was planning on opening a new business, they liked it.”

Maples plans to renew an old custom that was practiced years ago at Taunton’s.

“The back of the store will be open on weekends,” he said. “We will have a fun place in the back where people can come to hang out. We will always have the coffee pot plugged up, and people are welcome to enjoy a cup and talk about what’s going on in the world.”

One of those who’s pleased to see a new business open is Mayor Leonard Riley.

“This is really special to me,” he said. “Lee was one of my students at Valley High. He graduated in the class of 1981. I remember him being very artistically talented, and you can see that with what he’s done in the store. He was at Fairfax Drugs for many years and has been in this store every day for the past three of four months getting it ready to open.”

Riley said that now is the time to go into business in the City of Valley.

The city’s sales tax is continuing on a record pace. The more revenue that comes in, the more the city can do in the way of infrastructure such as paving streets and having water and sewer improvements.

GVACC Executive Director Carrie Royster said she was especially pleased to have a new antique store open in the local area. She said she had already picked out some items she intended to purchase.

Maples said that some furniture had been donated to the business and that its sales would benefit Exton Black, the Beulah boy who is struggling with Down Syndrome.

The Fairfax Village Antique Market part of the business already has 30 antique vendors. There are spaces for 35 more.

“Almost everyone is local,” Maples said. “We do have one vendor from the Tallassee area, and we are getting interest from people from the Atlanta area. They are asking about space in the store.”

Maples thanked his dad, Will Maples, for the help he has offered in getting the store open.

Lee Maples said that one thing that needs to be straightened out involves Mapquest, the internet directional site.

“It’s telling people to go to Hogansville to find us,” he said to some laughter.