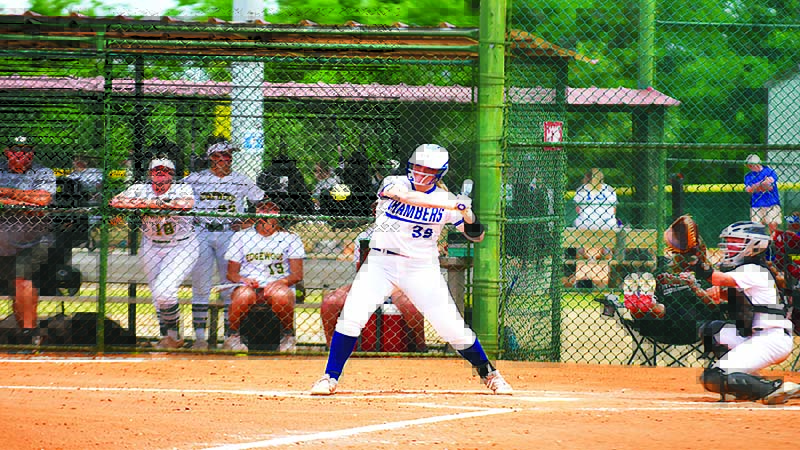 The Chambers Academy softball team squeaked by Edgewood 8-6 in the first game of the regional tournament, but it ran into a buzzsaw in Macon East, losing 12-0 in the second game. With the split, the Rebels are one of the No. 2 seeds as they head deeper into the AISA 2A playoffs.

“You come to a seeding tournament and when you go home, you want to be the one seed. We didn’t play very well against Macon East, but that’s a multi-state champion,” coach Jeff Hines said. “[Macon East head coach]  Glenn Lott is one of my best friends, we grew up together. They play 60 something ball games, and they have D-1 players all over the field.”

“I was proud of the girls because we didn’t lose our composure. We kept battling and found a way to win in the end,” Hines said of the Edgewood game. “We made a play at the end that we benefited from, and we came out and won. I  thought we hit the ball well. I thought it was a very well-played game all-around. We had very few errors. It was a good win for us.”

Chambers and Edgewood were tied after the first inning, but Chambers retook the lead in the third inning. The Rebels put their first two batters in scoring position as they led off with a single and a two-base error. A wild pitch gave Chambers the lead, while a single by Mckayla Foster brought in the second run of the inning.

The Rebels scored three more runs in the fifth inning as a throwing error by the Edgewood catcher scored three runs.

Chambers junior Mattie Reese extended the lead in the sixth with her first career home run, a liner hit over the right-center field fence.

In the second game, Macon East dominated from the start. The Knights led off the bottom of the first inning with a solo home run, which was the first of seven runs scored in the first inning. They added to their lead in the second as a two-run home run and a single extended the lead to 10. They scored the game-winning run off a Chambers error.

“We just ran into a  buzz saw, but we created a lot of that in this game,” Hines said. “We made a ton of errors.  If we don’t make those errors, maybe it’s a different ball game. I thought we lost our composure in this game. Our intensity was gone, our focus was gone, our aggression was gone,  and that’s what I talked to them about after the ball game. To get to where we want to get to, those are non-negotiables. We always have to maintain those things.”

“I’ve coached baseball before, but it’s different, but I love being around these girls,” Hines said. “They play hard, they listen and they’re coachable. They do what I ask them to do. We haven’t changed a whole lot of what they’ve been doing all year. It was kind of a natural fit for me to come in and pick up where Jon left off. We wish him the best in his recovery and his rehab. I talked to him last night, and he’s doing well. We hope to have him back in the next week or so.”