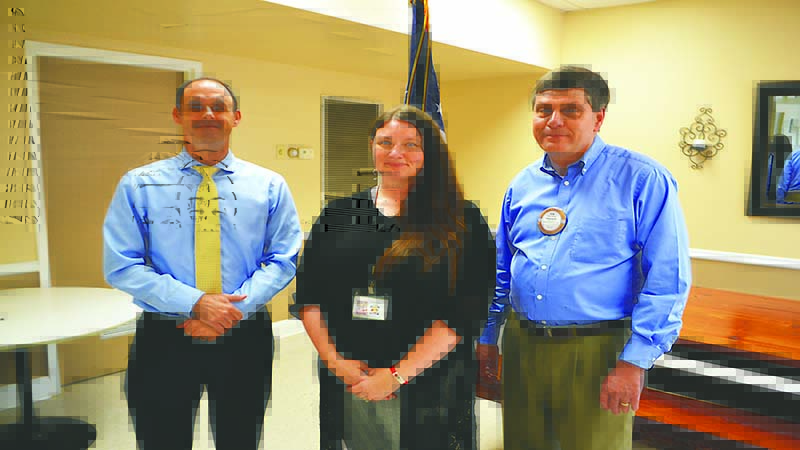 LANETT — On Thursday, Chambers County EMA Director Jessica Yeager looked back at the kind of work the local Emergency Management Agency and Chambers County 9-1-1 were doing one year ago. The U.S. was in the throes of something not seen by Americans in over 100 years.

“We had never dealt with a pandemic before,” she told members of the West Point Rotary Club at their weekly meeting. “No one knew what to expect. I’m sure most everyone had some level of fear, especially if they had elderly family members they were taking care of.”

Chambers County EMA was involved early as part of the community response to Covid-19.

“There was a coordination effort, which included working together with our health department, hospital, nursing homes, first responders and businesses,” Yeager said. “We took this on as our daily operations continued.”

Typical of the daily operations that continued were the deployment of the EMA’s communication vehicle and staff to look for a missing child in Lee County, being ready to respond to hazmat incidents on Chambers County’s portion of I-85 and being ready for severe weather days.

There was a big need for personal protective equipment, or PPE. It was an absolute necessity for the hospital staff, nursing homes and first responders. There was a national stockpile of masks and gowns, and some of it was sent to Chambers County. However, some of it was unusable.

“On our initial shipment, the straps on the masks had dry rotted and could not be used in the shape they were in,” Yeager said.

She reached out for advice from local leaders, and County Commissioner Debra Riley stepped in with a solution.

“She took on replacing the straps,” Yeager said. “She replaced some of them herself and had some of her friends replace the other ones that needed to be replaced. This allowed for hundreds of masks to be used locally that otherwise would have been discarded.”

After first meeting the needs for the hospital, nursing homes and first responders, the EMA was asked if it could help get PPE to local funeral homes and Chattahoochee Hospice.

“Their vendors were unable to fill their orders, and they asked us if we could help them,” Yeager said.

As shipments of PPE were sorted and distributed by the EMA, the staff kept a daily log of how fast it had to be replaced. A plant in the Cusseta Industrial Park, Ajin, then stepped up with a major donation of PPE for the county’s first responders.

There were times when the EMA had to use some old-fashioned ingenuity in dealing with problems that cropped up. “When our supply of isolation gowns ran out, we purchased ponchos as a substitute and distributed them as needed,” Yeager said.

Anyone who went shopping locally for a poncho on a rainy day last spring and couldn’t find one now knows why.

“We purchased every one we could get our hands on,” Yeager said.

The local EMA is part of a five-county region that partnered together in the purchase of gowns, face shields and gloves. Yeager said it was better to make purchases in bulk.

“Vendors who were able to get PPE had rules about minimum orders,” Yeager said. “Our county commission supported us in this, and it helped us a lot. We had the funds we needed to do what we had to do.”

When the EMA – like everyone else – was having trouble finding hand sanitizer they got help from an unexpected source.

“John Emerald Distillery in Opelika started making sanitizer in bulk,” Yeager said. “Our staff would pour it into smaller containers, so we could distribute to our first responders.”

The start of the pandemic last March was an especially stressful time for the EMA/9-1-1 staff. Deputy Director Kathy Hornsby had to be quarantined for 14 days after being exposed to the virus. She continued to work at home, but everyone else had to pick up the slack for what was a pretty big loss for the daily operations of the EMA/9-1-1 center. “I adjusted my hours,” Yeager said. “Some days I was there from 7 a.m. until 2 a.m. the next day.”

Dealing with a pandemic was something new for everyone.

“We had had dry runs on H1N1 and Ebola, but this was different,” Yeager said. “Those were not of the same magnitude of what we were now dealing with.”

The 9-1-1 center is normally a very busy place, but Covid meant even more activity.

“Our daily calls were going through the roof,” Yeager said. “Our dispatchers are the backbone of our county in helping our first responders. We can’t thank them enough for what they do. Life didn’t stop with Covid-19, but it did give us a lot of hurdles we had to overcome. I hope we can look back on this period one day and be grateful for the closer relationships it allowed us to build with people. My husband is a first responder. There were times we couldn’t see each other as often as we would have liked.”

The 9-1-1 center did get some calls they shouldn’t have gotten.

“Some people would call us to ask where they could get toilet paper,” Yeager said. “We finally had to tell them to go to Dollar General on Thursday morning. That’s when the truck carrying it would get there that week. Our dispatchers don’t get the credit they deserve. In addition to our local cities and the sheriff’s office, they handle calls from 11 different volunteer fire departments in the county. There are a number of times when some major emergency calls are coming in at the same time.”

Despite being hopeful that we have seen the worst of Covid, Yeager cautions everyone not to let their guard down.

“I think that when traditional flu comes back, we may see a rise in Covid cases,” she said.