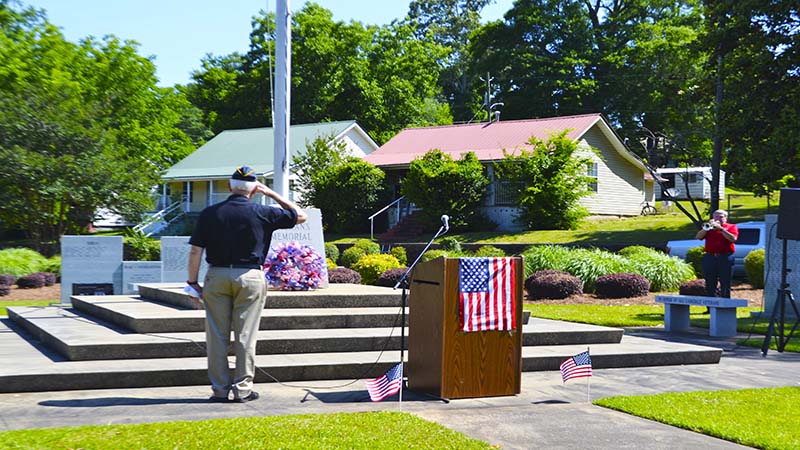 VALLEY — A good-sized crowd was on hand for Monday’s 11 a.m. EDT Memorial Day program at Veteran’s Park hosted by American Legion Post 67. Guest speaker Arnold Leak said it was good just to be out on a beautiful day after so many of us had been exiled by the Covid-19 virus for an extended period.

Post Commander Lanny Bledsoe said that Veteran’s Park is hallowed ground to him. “There are four monuments in this park that bear the names 93 local men who died while serving in the military in wartime,” he said. “We are here to honor both them and their family members for what they went through in losing them. I am proud that Post 67 had these monuments placed here. These men should never be forgotten for what they did. I encourage local school teachers to bring their students to this park, look at these names and think about the sacrifices these men made for our country.”

Each name on the monument, Bledsoe said, is a local man who answered the call of duty and gave their lives in the cause of defending freedom for our country and our allies.

Bledsoe said he had doubts the current generation would be willing to do something similar if it came to it. In introducing Post Adjutant Sammy Newton to deliver the opening prayer, Bledsoe commended him for answering the call of duty when it was his turn and serving in Vietnam. He thanked him on the job he did in getting membership renewals to the Legion. “We had a 100 percent rate,” he said, getting a round of applause from the crowd.

Valley Mayor Leonard Riley normally speaks at Memorial Day programs on behalf of the city. He and wife Debra are out of town to attend birthday celebrations for their twin grandsons in North Carolina. Mayor Pro Tem Jimmy Gilson filled in for him. Gilson noted that Memorial Day along with predecessor event Decoration Day had been annually observed in the U.S. in late May every year since 1868. “For lots of families, this weekend kicks off a wonderful season of barbecues, swimming, camping and all sorts of outdoor fun,” he said, “but the true meaning of Memorial Day goes much deeper than that. On this day, I encourage each of you to take some time, even a few minutes, to think about and remember those men and women from our hometown and from across the country who have served and died. They should never be forgotten. May God bless those men and women, and may God bless the United States of America.”

Bledsoe noted that Post 67 had lost a dedicated member this past year with the passing of Johnny Miles. “During his service, he did one of the three toughest jobs anyone can do in the military. He used to jump our of airplanes,” Bledsoe said. “The other two toughest jobs are amphibious landings and flying into hot combat zones.”

Bledsoe thanked the American Legion Auxiliary for pinning poppies on the lapels of those arriving for the program. The poppy tradition is associated with World War I.

Leak referenced this when he quoted a stanza from “In Flanders Fields” by John McCrae: “We are the dead, short days ago; We lived, felt dawn, saw sunset glow; Loved and were loved, and now we lie; In Flanders Fields.”

“We wear the red poppy today as a traditional reminder of the great price sometimes required of the people who are willing to fight for our great country and the ways of life we cherish even though it cost them their life,” Leak said.

Leak talked about a warrior oath men in harm’s way have. “I will never leave a fallen comrade,” it goes.

It’s this oath that keeps a search going for those who are missing. “To this day, more than 73,000 troops remain missing from World War II alone,” Leak said. “Most of them will never be found, but the search goes on. Though it may be in vain, it will never end. The warrior oath to never abandon a fallen comrade is a promise we made to each other, that even if we die, our brothers in arms will do everything they can to bring us home. It’s a mission that hasn’t ended and as long as wars continue, it never will.”

Leak is a decorated combat veteran from the Vietnam War. He said he had some big shoes to fill when he got there. He was replacing a helicopter pilot who had died. His last words were “Tell my wife I love her.”

“Having known several men who were killed in combat,” he said, “I know they did not willingly sacrifice themselves ‘on the altar of freedom.’ They did put themselves into harm’s way to complete their missions and to live our their lives. We expected that if we died, our brothers and sisters would remember us and not let our deaths be in vain. We did not want to be left behind.”

Leak said that he was moved by the opening and closing scenes of the movie “Saving Private Ryan.”

Those scenes were filmed in the Normandy American Cemetery in Colleville-sur-Mer, France. A total of 9,388 U.S. soldiers who lost their lives in the 1944 Normandy campaign are buried there. The opening scene shows an aging veteran searching for a name on one of those white marble crosses. When he finds the name Captain John Miller he is overcome with emotion, falls to his knees and weeps.

The old man is Private James Ryan, and Captain Miller was the commander of the small group of soldiers who went on a very dangerous mission to find the private and send him back home. He was the only surviving son of an Iowa farm couple who had lost their other three sons in just a few days of combat.

The movie depicts what Miller and his small group of soldiers went through in their search for Private Ryan. Most of them are killed before they find him and when he is found the surviving American soldiers have to hold off a large number of German soldiers and tanks before help can arrive. The captain if fatally wounded while trying to hold off an advancing tank on a bridge. Help does arrive in a big way to push the Germans back, but as Captain Miller is dying he whispers into Ryan’s ear “James, earn this.”

The final scene shows the now old Private Ryan rising and asking his wife “Am I a good man? Tell me I’m a good man.”

“Private Ryan wanted to know that the sacrifice made by Captain Miller and the other men sent on the dangerous mission had been worth it,” Leak said.

“We are here today because we will not let the fallen be forgotten,” Leak said. “We have come here freely to fulfill our obligation to them and hopefully earn the lives they gave to us by living our lives to the best of our abilities. As Veterans, we come together to continue to fulfill our oaths to ‘support and defend the Constitution of the United States against all enemies, foreign and domestic, and bear true faith and allegiance to the same.”

“We choose to come here every year and participate in services like this to remember our fallen soldiers,” Leak said. “We put out flags in their honor. We read the names that have been carved in stone. To keep their memories alive, we tell stories about who they were and what they did. We leave no one behind.”

Bledsoe concluded by saying he had some deep concerns about the country’s future. “What we are facing in today’s world may be as threatening as what we faced heading into World War II,” he said. “When I was in the service in the 1950s I served under men who had fought in World War II. One of my officers had two Silver Stars and had been in World War II, Korea and later served in Vietnam. They were very serious about what they did and taught us to be that way, too. I don’t know that we have that same kind of commitment today. This country has never been perfect, but I think it’s the best country to live in in the history of the world. Our people have to stand up when our freedom is in jeopardy.”

The program opened with Gary Harris playing the National Anthem on trumpet and closed with him playing Taps.

“I thank you for your attendance today and for honoring those who have died for our country,” Bledsoe said.