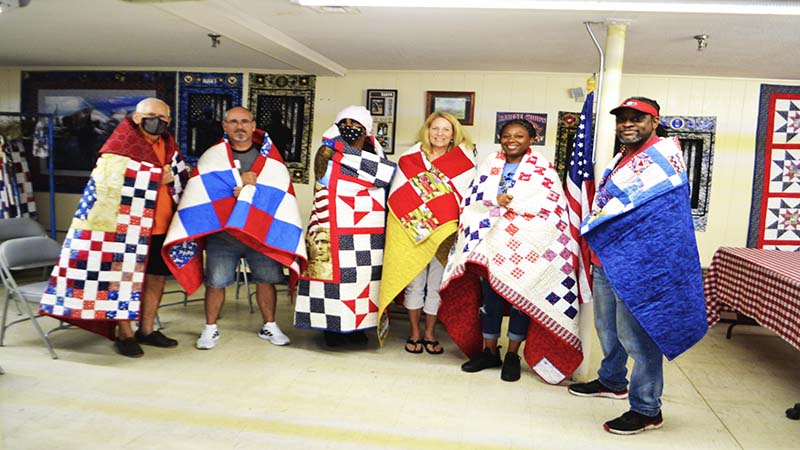 Pinkard lives in Auburn today. He was in the U.S. Navy for 30 years and spent most of his career along the east and west coasts as a diver. He also had two tours of duty in Iraq. Pinkard said that diving is nothing like it’s portrayed on TV and in the movies.

“There’s no visibility,” he said. “You can’t see something that’s right in front of you.”

Hudson was in the Army for 26 years. He was stationed all over the U.S., did four combat tours in Iraq and also spent time in Korea and Germany. He had military assignments at Fort Riley in Kansas, the Aberdeen Proving Grounds in Maryland, Fort Leonard Wood in Missouri and at Fort Benning in Georgia. He today makes his home in the Columbus area.

Lakeisha Teague was in the Army for 19 years. She did two tours of duty in Iraq, was in Korea and Japan for a time and at army bases throughout the U.S. She now lives in Phenix City.

Wisconsin native Ann Erenheim was in the Army for 25 years. She served in Operation Desert Storm in 1991 and in Operation Iraqi Freedom in 2003. She now resides in Hamilton, Georgia. Arvinette Brooks knows the exact length of her time in the Army — nine years, seven months and 22 days. She served in Iraq, Korea and at a number of bases in the U.S. She now lives in Columbus.

Eddie Johnson was in the Army for 20 years. He was a medic during three tours of duty in Iraq and Afghanistan. He also served in Korea and Germany.

“There’s more than $100 in fabric, batting and thread into every quilt we sew,” she said. “Most of it is out of pocket.”

“It’s an honor for us to do this,” said sewingmachine.com owner Steve Tramell, “and we couldn’t do it without our quilting group.”

Quilts have been awarded locally to veterans and active duty military personnel for several years now. There were no presentations between March 2020 and February 2021 because of the COVID-19 pandemic.

It took Roberts’ small group some three years to make and award 100 quilts, but as word spread about what they were doing, chapters started organizing all over the U.S. In May 2014, the 100,000th quilt was presented. Since then, the number of presentations in the U.S. has surged past the 270,000 mark.

“Each quilt presentation carries with it a three-part message,” Simpson told the group gathered for Saturday’s program. “First, we are honoring you for your service and your willingness to leave all you hold dear and stand in harm’s way in a time of crisis for all of us. Second, we know that freedom is never free. Our quilts are meant to say thank you for your many sacrifices. For those of us who have never seen combat or been in a war zone, such experiences are beyond our capacity to comprehend. Finally, these quilts offer you comfort. Throughout history, when young men left home to fight in a war, many of them took a quilt made by a family member that they called a comfort quilt. It may have been all these young men had to provide the warmth of the memories of home. We want you to use this quilt. It is not meant to be hung on the wall or put in a display case.”