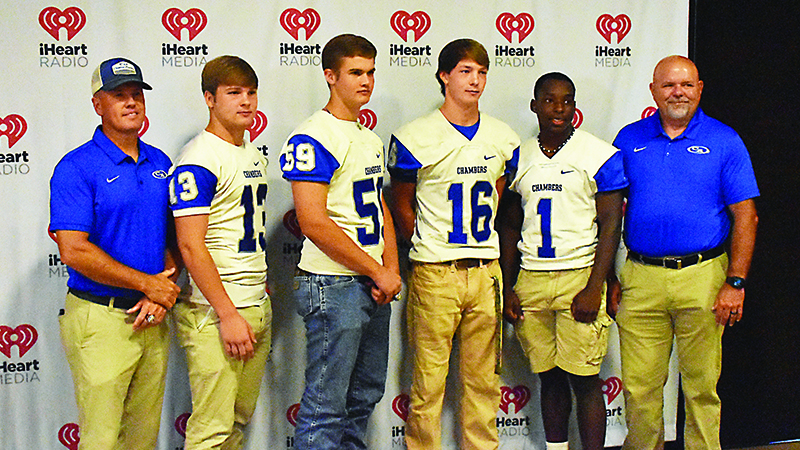 Chambers Academy achieved the ultimate goal in 2020 when it won its second state championship game in three years. During the season, the Rebels went 12-1, winning each game by an average of 31 points per game, finished with five players that were selected to an AISA All-State team by the Alabama Sports Writers Association and had the AISA Back of the Year in senior quarterback Payton Allen.

Though Allen and several other key seniors graduated in May, the Rebels will still be loaded with experience when they open their season against Lee-Scott on Aug. 19, as the team has 20 seniors on the roster. Most of those 20 seniors made an impact during 2020’s championship season.

“Our team is really excited about this year,” head coach Jason Allen said. “We have one of the biggest classes we’ve had in a long time at CA. We’ll have 20 senior football players on our team, which is really a testament to our program. We’re very excited.”

Though the Rebels are coming off a stellar state championship season, they have a lot to motivate them heading into the 2021 season.

One of the main motivations is playing for Holden “B” Messer, a junior that died in an ATV accident in the middle of July. Messer was going to be a junior at Chambers Academy and was going to play special teams and linebacker for the Rebels in 2021.

“That really changed the direction of our team and of our focus,” Allen said. “He was a well-liked young man that was going to play a big part of our football team this season. It’s been very tragic for our community and our players. It’s been a time of deep reflection. It’s changed our gears a little bit toward what motivates us in the game of football and the game of life. We are really saddened, and we’re going to continue to honor that young man this season. Our prayers are continued to be with our team and their family. We will be doing a lot of things in honor of him.”

Another key motivator is winning a third state championship, as the Rebels have played for a title every year since 2015.

“We’ve set the bar pretty high, and that’s going to be the standard that we want to accomplish,” Allen said. “We want to win a state championship. We want to go out in style with these 20 seniors.”

In 2020, Chambers had several players stepping into new roles, either as transfers or taking over for graduating seniors. Jordan Benbrook took over the running back role, rambling for 1,265 yards and 21 touchdowns, while TY Trammell and John White transferred to Chambers and took over the receiver roles, positions they had never played before.

Now that those three players have another year of experience under their belts, they are poised for big senior seasons.

“Last year was my first year coming up to the school and first-year playing receiver, so this year, I’m more experienced. I’m used to the calls and plays,” Trammell said. “I’m planning to come on in and do what I do best. I have way more experience at the position now like my route running has gotten a lot better, my speed and my strength [have also improved]. I’ve worked so hard this offseason to improve all my stats, so my stats will get better during the game.”

When Chambers hosts Lee-Scott on Aug. 19 to kick off the high school football season in Chambers County, Allen will be going for his 150th win as a head coach. Of the 149 wins he currently has, 128 have been at Chambers Academy.

“That means a lot. I was honored and shocked that they renamed the field after me,” Allen said. “I’m going to go and run with it. There’s a lot of pride for me at Chambers Academy. As career wins, I feel like that is really a culmination of a lot of great players and great coaches that I’ve worked with. I’m just grateful to win the next one, so for me, it’s just going to be the next game.”