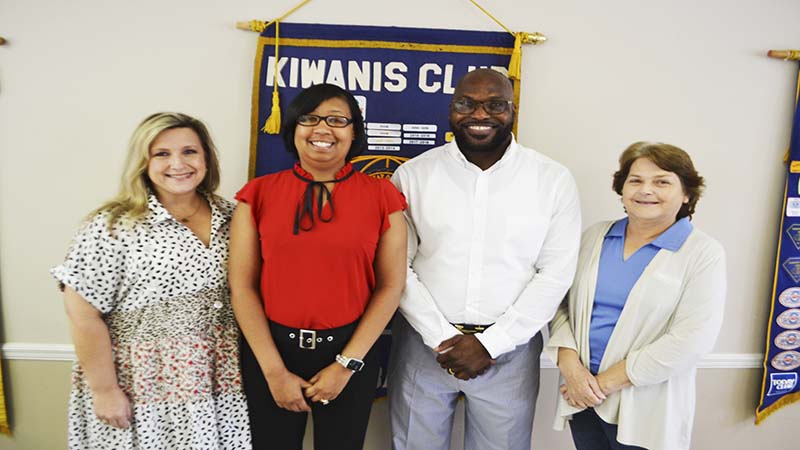 VALLEY — Pastor Donald Lancaster discussed his life’s journey at Wednesday’s noon-hour meeting of the Kiwanis Club of Valley. The meeting took place in the fellowship hall of the Langdale United Methodist Church.

Lancaster is the pastor of the New Dimensions Worship Center, which is located a short distance up Highway 29 from Langdale Methodist. It’s in the former location of the First Baptist Church of Valley, which recently relocated in the former InterCall building near Renasant Bank and Urgent Care. Thus far, it’s been a very good move for both local churches. Valley Baptist has much more interior space for its growing congregation, and New Dimensions has a larger building it can call home.

Lancaster grew up in the West Shawmut community. Going to church every Sunday was a big part of his young years, but he got away from that as a teen and young adult. He got on the wrong road of experimenting with illegal drugs, which led to selling them, something that eventually landed him in federal prison. It was in that bleak setting that he fully surrendered his life to Christ.

Lancaster was called to preach 20 years ago in 2001. He said he was fortunate to have some truly greater mentors, people like Frank Kennedy, Michael Stiggers and Louis Upshaw. At one time he was pastoring two churches at the same time. He credits his wife, Tammy, for always being there for him and offering the best guidance. The one major goal that always seemed to elude him was having a church building owned by the congregation, a place the church members could call their own.

“We rented lots of places over the years,” he said.

The prospect of church ownership brightened earlier this year.

“A church member called to tell me a church building was for sale in West Point,” he said.

He went to talk to local realtor Brad Huguley about it. The West Point location didn’t work out, but Lancaster was undeterred.

“I asked him if any other church buildings were for sale in the local area,” he said. “He told me no one had ever asked him that question before but that one might be available in Langdale.”

Pastor Lancaster, his wife and some members of the church went to see the Valley Baptist building, and it seemed ideal for their needs.

“By the grace of God we were able to close on it,” Lancaster said. “We have been there since early this year, and we have enjoyed every minute of it. It’s the kind of building we thought we’d never have. God does work miracles.”

Lancaster does have some specific goals in his ministry.

“I want to work with local first responders,” he said. “Having been there in my past life, I can talk the language of the street. I think I can help de-escalate some situations that can come about.”

Another goal is to make a positive difference in the community.

“I want to help build our community in every way. I want to help people get more in touch with their spiritual goals. If you can do that you have half the field covered. God saves us for a reason.”

Other goals include having a food closet, a clothes closet, and possibly be a location of a Celebrate Recovery program.

“I can remember a time when we could sleep on our front porches without being afraid,” he said. “Now, people are locking themselves in their homes in the daytime hours. Many of us have family members who are having drug problems. I have been there and done that. I want people to know that I am here and can help them. I believe that when one family is hurting it hurts the entire community.”

Lancaster expressed concerns about the lingering impact of COVID-19 on church attendance. “Before the pandemic, we were getting 100 to 120 people to our Sunday services,” he said. “We are now getting between 50 and 60. Everyone is going to Walmart now, why not go to church like you used to?”

One member of the club said this is a common problem with all churches now.

“The problem is that people have gotten used to not going,” the member said.

“We want to get our youth back in the church,” Lancaster said. “It’s getting harder and harder to do that. There’s so much out there they can be doing.”

There’s also a lack of discipline.

“I’m afraid that the old-style values and principles are almost gone,” Lancaster said. “Some parents don’t want you talking to their children. When I was young, my parents decided that I would attend church. That worked out well for me. I believe if we put out the actual facts and the truth, we could take on our problems and win. By doing that, we could make things better for all of us.”

New Dimensions has a Sunday morning prayer service at 10 a.m. EDT followed by Sunday school at 10:15 a.m. The morning worship service starts at 11:30 and continues until around 1 p.m. There’s a 7 p.m. Bible study on Wednesdays.

Lancaster is a 1985 graduate of Valley High. He’s the older brother of former Valley High and University of Alabama basketball star Bryant Lancaster. His sister, Janice, also starred in basketball at Valley High.