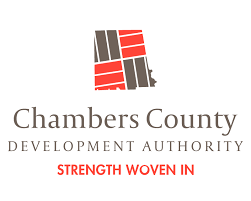 This project is designed to develop an ecosystem conducive to nurturing tech entrepreneurship with minority populations, Black, Hispanic, and people of color.

This opportunity is valued at $30,000 per community and will support the work being completed in Chambers County.

“Each community we have selected brings its own unique set of assets, cross-sector partnerships, and diverse leadership to the table,” said Leah Taylor, Head of Digital Economic Development at Rural Innovation Strategies, Inc. (RISI), sister organization to CORI. “Our team is excited to collaborate with each of them to build digital economy strategies that create conditions where community members of color are active drivers and participants in home-grown digital jobs and startups.”

Chris Busby, Chambers County Development authority director of commercial and community development, said he heard about the program through a colleague and thought it would be a perfect fit for Chambers County.

“He said, ‘look, I think this is a program that would be interesting, I think your community meets the criteria of what they’re looking for,’” Busby said.

Busby said initially he thought it was a long shot, but decided to apply, then received a call that the application was selected for an interview. As part of that interview process, Busby had to develop a team representing the community.

“Those are our core members. Those are the ones who did the interview,” Busby said. “When this happens, we’ll pull in lots more partners.”

Davidson says for him this project presents more opportunities in a vastly growing world of technology.

“Historically, you know, when you look at education, minorities, underrepresented communities of color have kind of fared worse or scored lower on test scores,” Davidson said. “Things are changing so fast and in technology, it’s just becoming like an integral part of everything. So with technology being at warp speed, that just exacerbates things, and then in a community, say, like ours, where we have underrepresented people, but you can’t ignore the fact that you also have issues in rural communities. And it’s not necessarily just only of color, just rural communities, in general, are being left behind.”

The hope is that the pilot program will develop an ecosystem for tech startups and focus on teaching children the skills they need to start a tech business.

“I’m excited about the pilot because it talks about trying to develop an ecosystem where not only is it going to focus on, say, teaching kids how to code,” Davidson said. “But, also developing jobs or opportunities, so they can take those skills and still live in the area. Because it makes no sense if I have these skills, but now I’ve got to move down to Auburn or move closer to Atlanta to take advantage of what I have.”

Davidson points to some of the positive attributes in Chambers County that make it a viable location for digital startups, such as, low cost of living, proximity to several larger metropolitan areas within an hour drive and the current broadband initiatives that look to expand services throughout the county.

Likewise, Busby is excited for the pilot for what it brings to the minority population of the county.

“I really am excited about the opportunity to provide entrepreneurial resources for our minority community,” Busby added.

Busby says that they have not yet settled on an application process, but now that the announcement has been made and the wheels are in motion, people will reach out and express their interest in the program.

He said anyone selected to be a part of this pilot program will have to have ties to Chambers County, “

Busby says at this point, there is no cap on how many participants are allowed in the program. The beginning phase will begin in 2022.