Russell County defeats Valley 35-20 in back and forth game 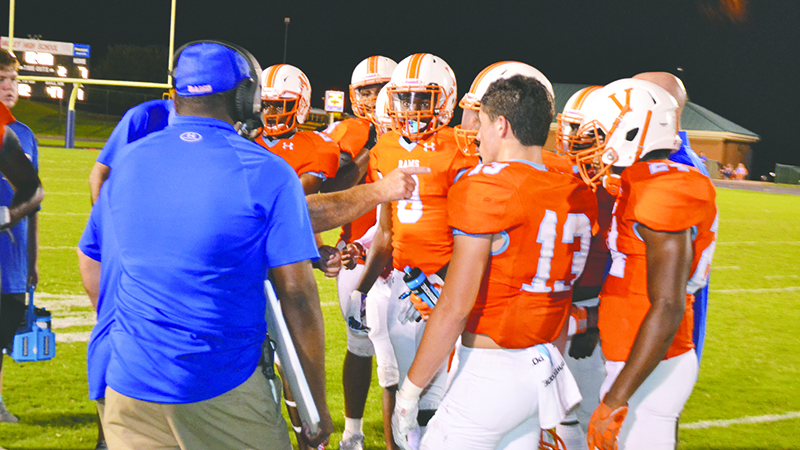 VALLEY — The Russell County Warriors are unquestionably one of the most improved teams in Alabama Class 6A Region 2. On Friday, they brought their high-powered offense to Ram Stadium and spoiled Valley High’s homecoming with a 35-20 win. Their record now stands at 3-1 on the young season. Valley fell to 2-2.

Valley’s hopes for a win were hampered by a second quarter injury to starting quarterback Cam Dooley. The score was tied at 14 when he went down, and Russell County took command with him out. It’s thought Dooley suffered a hip flexor strain and could return to action soon.

Senior running back Jayden Angel had good game for Valley, running for 124 yards, Tirus Patten also played well running the ball. He had 38 yards on five carries. Kenneth Stephens had a great game on defense. He had 14 tackles, three assists, a pick six and a blocked punt. Antwan Lynch had six solo tackles and four assists, and Izayah Robinson three solo stops and three assists.

Things looked great for Valley when Stephens’ interception return early in the game gave the Rams the early lead. He took advantage of one of the few mistakes the Russell County quarterback made in the game by picking off Calhoun’s pass on the right side of the field and racing to the right corner of the west end zone. Quinn Vega’s PAT made the score 7-0 in favor of Valley with 10:36 left in the opening quarter.

The Warriors showed their quick-strike ability on their next series. After moving for one first down, A.J. Black took a pitch from Calhoun and exploded around left end, going 56 yards down the home sideline for a score. The first of five PATs by Jeremiah Baker tied the game 7-7 with 8:53 showing in the opening quarter.

After an exchange of possessions, Valley’s special teams came up with a big play when Stephens blocked a punt deep in Russell County territory. The Ram offense took over on the 23 with a great opportunity to retake the lead. Valley drove to inside the Warrior five before being pushed back to the 14 on a bad snap from center. It looked as if Valley had gotten the lead back when Dooley passed to Romel Jackson in the right corner of the end zone. It was a beautiful play, but it was called back on a penalty. Valley would opt for a field goal on fourth down by Vega’s 37-yard try was wide left.

Not scoring after the blocked punt was a major missed opportunity for Valley.

Calhoun then led the Warriors on a long scoring march to take a 14-7 lead on a five-yard run by Black with 10:14 left in the half

A nice kickoff return by Valley had the Rams on the Russell County side of the 50 at the 45. The Rams would drive it in from there to tie the game at 14 with 5:40 left in the half. Karen Sherrell took it in from five yards out, and Vega’s PAT had the game in another tie. The Warriors drove the ball 80 yards on the next possession to seize the lead for good. Calhoun passed 34 yards to Drew Pickett for the score with 47.1 seconds left in the half.

On a third-and goal play from the 20, Pickett caught the ball near the 15 and was surrounded by three defenders near the 10 but managed to elude them and reach the end zone just inside the pylon.

Had the tackle been made near the 10, the Warriors would likely have had to settle for a field goal try.

Giving up a touchdown just before halftime was a real killer for the Rams.

Things went from bad to worse in the third quarter when the Warriors extended their lead to 28-14 on their first series of the second half. Calhoun passed 20 yards to Black for that score.

Valley fought back to cut it to 28-20 on a short run by K.P. Parker. The extra point was missed due to a bad snap.

There was only 3:57 left in the game at that point. Valley opted for an onside kick. For a brief moment it looked like they may have recovered it when the ball took a fortunate bound, but the Warriors were on top of the ball when the players were unstacked.

Russell County looked content to run out the clock but stung Valley with a 34-yard TD pass from Calhoun to Black with 1:26 left.

The Rams will try to get back in the win column next week with a road game at Sidney Lanier. It will start during the noon hour on Saturday.