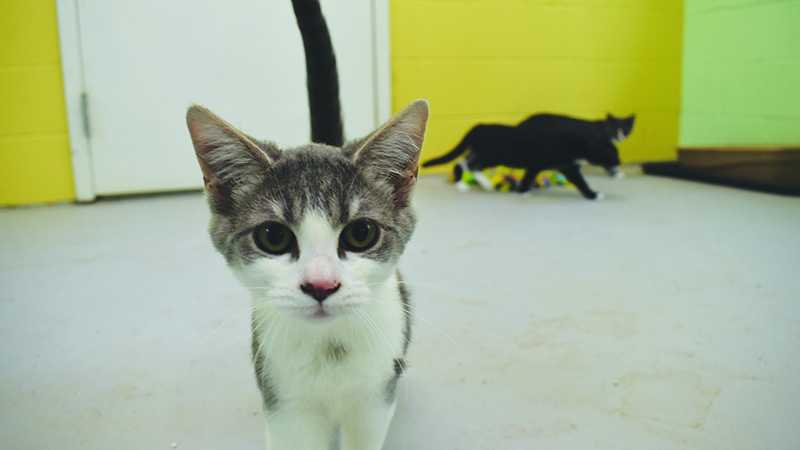 Overwhelmed: The Chattahoochee Humane Society is overwhelmed with animals and says it may soon have more animals than it can handle.

The Chattahoochee Humane Society in Valley is currently overwhelmed by both dogs and cats. If they are not adopted or rescued soon, some will have to be euthanized to make room for more animals.

Shelter director Shon Sims and assistant director Lisa Cofield estimated on Wednesday that the shelter had 22 dogs. Cofield said the shelter had 16 dog kennels. She explained that the kennels have guillotine doors, which allows each to house two dogs.

Meanwhile, she said that litters of kittens are kept together in the same cages. When they grow up, they have to be separated. The Chattahoochee Humane Society had 20 cat cages and 25 cats on Wednesday.

Even with its current situation, Cofield said the shelter still has appointments to take in more animals.

“We’re not turning the appointments away just because we’re full,” she said. “We are a shelter. We have to do what we have to do, and that includes euthanizing for space.”

Sims said people surrendering animals are warned that their animals may be euthanized if the shelter doesn’t have enough space.

She stressed that pet owners should spay and neuter their animals. She said that the most common reason people don’t do so is cost.

“[Or] they meant to do it; they just didn’t get around to it,” she said. “And then the animal had puppies or kittens.”

Sims said the Chattahoochee Humane Society has a low-cost spay and neuter program.

“We have an agreement with one of the veterinary clinics that spay and neuter for us,” she said. “[Animal adopters] pay us $50, and we give them a certificate to take to that veterinary clinic to get it done. However, they are responsible for vaccines. They have to pay for vaccines for the animal because most of the vet clinics require the animals to be vaccinated to come in for surgery.”

Cofield said this year has been particularly bad for the shelter and that it’s been getting more animal surrenders than strays.

She hypothesized that pet owners have been surrendering their animals to go back to work after COVID-19 numbers improved. She also said people often surrender animals because they’re moving.

Sims said the shelter has no control over how many animals are brought in by animal control. She said all public turn-ins are by appointment only.

“We try to schedule that out so we know how many we have coming in and how many we need to get out,” she said. “But this year’s just been tough because all the rescues are full. They’re just as full as we are. It just makes it difficult for them to get them out of here.”

Cofield said a lot of shelters have recently lost their no-kill status because they, too, have been overwhelmed with animals. She said that a lot of people drop off animals after picking them up.

“Don’t pick animals up,” she said. “People need to know not to pick them up if they’re not going to take care of them. Bringing them here isn’t taking care of them. You didn’t rescue it by picking it up and bringing it here to be put down.”

The Chattahoochee Humane Society is considering offering a holiday discount from Nov. 1 to after the first week of January. The discount will depend on the donations it receives.

“I’m hoping we can get down as low as $25 per animal,” Sims said. If the shelter doesn’t receive enough money in donations, Sims said it might forgo testing the animals for diseases in order to adopt them out at lower costs.

“We will be closed to the public other than animal control for the week of Christmas and the week after Christmas because we’re going to be doing some repairs and maintenance on the building,” Sims said.

Anyone who wants to help the Chattahoochee Humane Society handle its large animal population can make tax-deductible donations to offset adoption costs for an animal. Each animal at the shelter costs an adoption fee of $100, which covers spaying, neutering, vaccinations, heartworm testing, and deworming. Cats are also tested for feline leukemia and FIV.

The shelter also has a link to its Amazon wish list of needed supplies on its Facebook page. Donors can ship items to 3265 Fairfax Bypass, Valley, AL 36854 or drop them off in person at the same address.

The shelter is open Mondays, Wednesdays, Thursdays, and Fridays from 10 a.m. to 5 p.m. Cofield said that some days, the shelter has to close early due to being short-staffed.

Walk-ins are welcome for those wishing to adopt animals. To limit the number of people in the facility at one time, visitors have to call a number posted on the front door to be let in.