Every day different for Inspire Academy’s teacher of the year 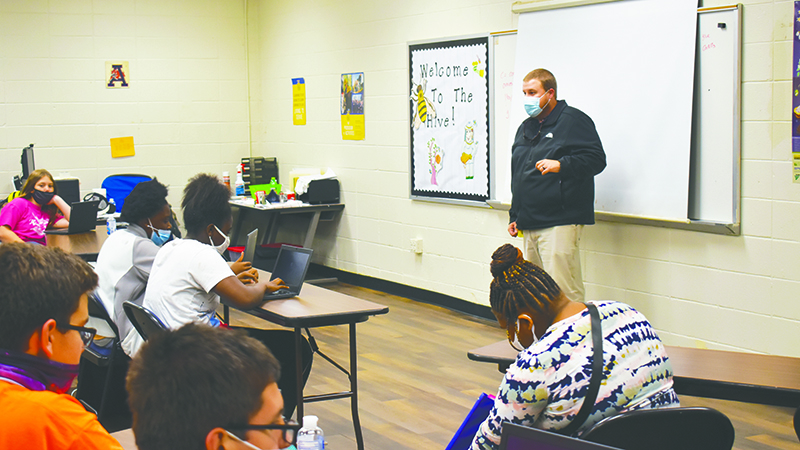 Teacher of the year: Jordan Harris lectures his students shortly before the end of class.

You never know what to expect in Jordan Harris’ agriscience classes at Inspire Academy. The day’s plans can change on a dime depending on what’s happening on Legacy Acres, which is a simulated workplace for students that’s run like a fully functioning farm.

Harris’ classes focus on production agriculture, so his students raise honey bees, work with livestock on campus, and spend some time every day in a greenhouse.

“In the spring, you may come in and we’re doing this one thing, and the next thing you know, we have to go help a goat that’s in labor and do something with that,” Harris said. “So you get to see the whole process, which I think is important.”

Harris strives to promote hands-on learning. He recalled a quote he said might come from Benjamin Franklin.

Harris’s students get involved in FFA, a student organization.

“My kids will tell you I like to compete, and I like to win, so that’s a fun aspect of it, getting kids ready, and they get to move on,” he said. “Especially with academic-based contests. There’s hundreds of contests. You can find something for every student to get involved in.”

Harris said he’s a very “student-first” kind of teacher. He believes that all students can learn and hopes his students see him as someone who believes in them.

He wasn’t expecting to be selected as Inspire Academy’s teacher of the year for 2022. He only learned this week that he won the title.

Harris said he believed that the title is part of a state-level contest. Each school selects a teacher, who then competes at the district level.

“And so it’s a big, long, drawn-out process,” he said. “I think the winner of the state goes on to compete for national teacher of the year.”

Harris has been teaching for seven years. He spent his first two years at W F Burns Middle School before transferring to Inspire Academy. He and Josh Bryan, an industrial agriculture teacher, worked together to make Inspire Academy’s agriculture program what it is.

“Some of these kids, I literally have all five years,” he said. “So, I get to watch them grow up, go through that middle school awkward stage, and then that high school stage where they start to see the world outside the four walls they’ve seen the whole time.”