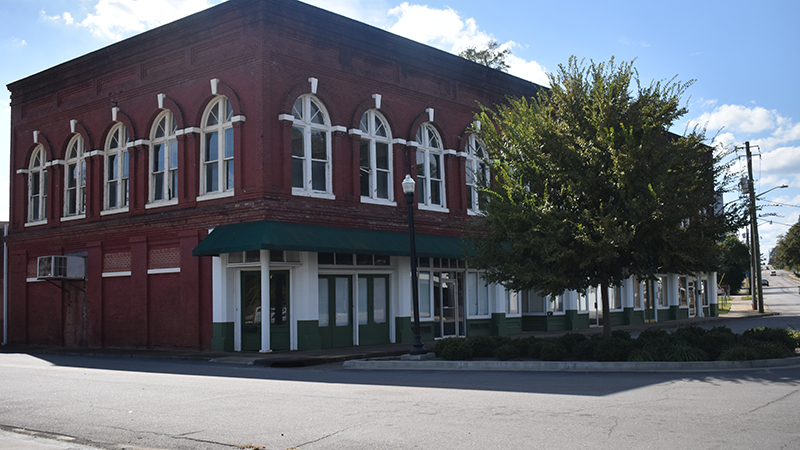 Still standing: The historic Fraternity Hall and Stores building on First Street in Lanett was the topic of conversation at Monday’s city council meeting.

LANETT — At Monday evening’s meeting of the Lanett City Council, the owner of the historic Fraternal Hall and Stores Building in downtown Lanett spoke about her plans for the two-story brick building. Carmen Davis is a U.S. Army officer and works at the Pentagon in Washington. D.C. She has owned the First Street building for the past 15 years with the goal of it being a major part of a downtown resurgence.

“My name is on the deed and will remain there until the day I die or Jesus comes back,” she told a large gathering in attendance.

Davis described the building as a historic treasure and the key for downtown redevelopment.

She said that while she owns the building on paper, in a larger sense it belongs to the people of Lanett. She made the case that it’s an indelible part of the city’s history and that Lanett citizens should play a role in the preservation of the building as one of the truly special places in Lanett.

She accused the city’s former mayor, Kyle McCoy, of disrespecting that process and attempting to make a land grab of the site. Davis said the building has not had water since a break in a water line back in 2014. The break has long since been repaired, but the building has not been reconnected to city water, she said.

She also complained about the sidewalk in front of the building. “Every other downtown building has benefitted with new sidewalks,” she said.

Major improvements are planned next year for First Street. The final phase of the downtown streetscape will include the portion of First Street from Highway 29 to South Eighth Avenue near W.O. Lance Elementary School and Veterans Park.

Davis thanked Council Member Tifton Dobbs on having been a good friend and talking to her about the downtown area and its needs. She urged the new mayor, Jamie Heard, to show some leadership on this. “You own this now,” she said. “You are the general, and they (members of the council) are the soldiers.”

Davis said she has been patient and acted with restraint in getting something done in the way of redevelopment but was not beyond taking “extreme measures.”

She said that grants are available for the restoration of historic buildings and urged public support of such initiatives. She said the building was structurally sound and had recently undergone some $60,000 in roofing upgrades.

Lanett Utilities Superintendent Tony Chandler told The Valley Times-News that two of the first floor store spaces are on city water. The store spaces that don’t have water, he said, are because they aren’t code compliant. “Some of them don’t have floors,” he said.

Chandler said it was not going to be easy to get the building up to codes. “It will take time and will probably have to be directed by an engineer,” he said.

He added that part of the roof had fallen off a smaller building in the rear.