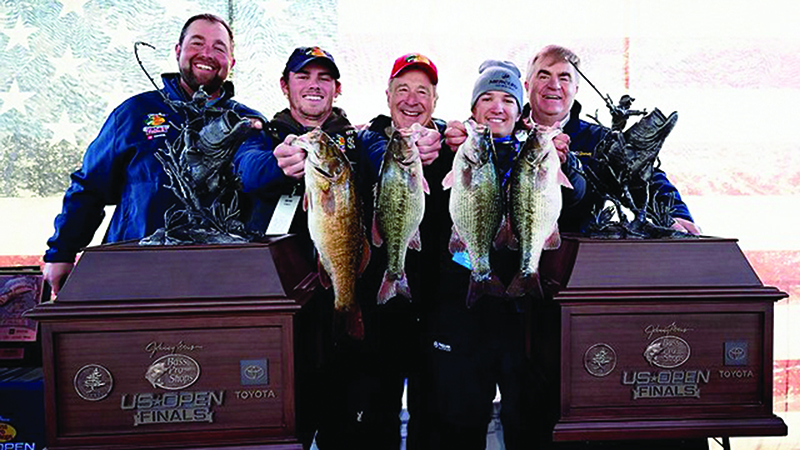 Auburn University students Logan Parks and Tucker Smith have a million extra reasons to be thankful this week.

The tandem of Tigers, who are members of the Auburn Bass Fishing Team, hauled in the $1 million first-place prize for winning the Bass Pro Shops US Open National Bass Fishing Amateur Team Championships on Sunday. Parks, a senior, and Smith, a sophomore, split the prize—the biggest payout in bass fishing history—and went home with 2022 Toyota Tundra CrewMax trucks and Nitro Z21 bass boats for their exploits.

Parks and Smith—who earlier this year were named the Carhartt Bassmaster College Series Team of the Year—topped 350 teams with a final-day weight of 16.41 pounds at the three-day event, which took place at Table Rock Lake in Ridgedale, Missouri. The final day of the tournament—which also raised more than $1.5 million in charity dollars for the restoration of bass habitats across the country—was televised live on NBC Sports Network, and it will be re-aired on NBC at 4 p.m. CT on Sunday, Dec. 5.

Auburn’s tandem was 10th out of 350 teams after the first day of competition, finished eighth among the top 200 teams on day two and then hit 16.41 on the scales with a haul of smallmouth and spotted bass on the final day, which featured the top 50 teams. They topped the team of Joseph Nicholson and Gary Sterkel of Olmsted Falls, Ohio, by just .23 of a pound in the final tally to take home the historic hardware.

“It hasn’t really sunk in yet,” said Parks, 23, who will graduate with degrees in supply chain management and information systems management in December. “We woke up this morning thinking it was a dream, but then we looked at our phones and realized it wasn’t. We’re just blown away.

“Just to be able to fish in that big of a tournament and win the tournament, that’s the biggest tournament that’s ever been put on in the history of bass fishing. That’s the most money anybody’s ever won, and to do it at a young age is just unbelievable.”

Auburn’s dynamic duo qualified for the prestigious tournament by finishing 13th out of a field of 250 at Lake Bull Shoals in Arkansas on Nov. 17, the last qualifier available.

“It’s been crazy. It’s been back-to-back-to-back tournaments, and the Bull Shoals qualifier was right before the championship, so we just went right there and only had a half day of practice,” Parks said. “It was just full force and finding them quick, so it was crazy. It was unbelievable.”

“It was just really emotional, and the emotions all came out when we won,” said Smith, a 20-year-old marketing major who won three Bassmaster national titles in high school. “Just the buildup of getting there and making it happen, especially thinking the people behind us had more weight than we did. We were second-to-last in the line, and usually the last team in the line wins the tournament.

“So, we didn’t know if we had it or not, and it was so close, you couldn’t call it before you got up there and weighed the fish on the stage. It was just a rush of emotions to win that level of a tournament, you just can’t beat it.”

The key to the championship, Parks said, was spotting a group of birds diving in the water going after bait fish in an area of the 45,000-acre lake they had not yet explored.

“We were riding around and hadn’t really caught much,” Parks said. “About 10 o’clock, we drove by a new place we hadn’t fished in the tournament yet, and we saw some birds that were diving. Usually that’s a sign of bait fish under the water, so we went over there, dropped our trolling motor in the water, used our sonar and were able to see fish sitting under the bait.

“We caught most of our weight in about a 30-minute span doing that. We ran around the rest of the day but didn’t catch much. We went back there at the very end of the day, and, in the last 20 minutes, we caught two fish that helped us get up to the winning weight.”

Parks plans to use his half of the $1 million haul to take his talents to the next level.

Smith will continue to balance his school work with the college fishing schedule as he works to finish his degree and prepare himself for the pro ranks down the road after graduation.

“I’m going to fish in the Southern opens and fish in college some more, because college fishing takes you all over the country to get the experience at all the different lakes you’re going to need to fish to make it pro,” Smith said. “So, I’m just going to mix in some opens and some college fishing and do school at the same time. After school, I’m going to go after it full force to try and make it to the elite series.”

Both anglers have plenty to reflect on this holiday season after a monumental year of fishing.

“It’s been a season of really low lows and really high highs,” Parks said. “It’s been an incredible ride.”