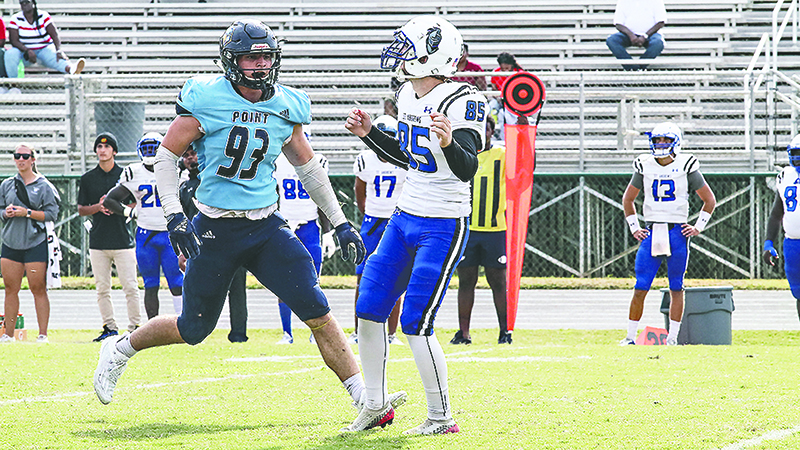 Stacking up the accolades: Gabriel Jacon-Duffy (left), led all players in postseason awards, including Defensive Player of the Year and Defensive Freshman of the Year by the Mid-South Conference.

WEST POINT – The Mid-South Conference announced the Appalachian Division All-Conference teams, and freshman Gabriel Jacon-Duffy was named the Defensive Player of the Year and Defensive Freshman of the Year to headline the Point University football team’s award recipients.

The league office made the announcement Thursday.

The athletes named to the Champions of Character Team are nominated by their coaches based on their leadership on campus and in the community while demonstrating the five core character values the NAIA embraces. To be nominated by an institution for the All-Academic Team, a student-athlete must maintain a minimum grade point average of 3.25 on a 4.0 scale and be in their third term or fourth quarter.

Jacon-Duffy earned both MSC Appalachian Defensive Player and Defensive Freshman of the Year honors after finishing the season with 13.0 sacks, 21.0 tackles for loss and two forced fumbles in 11 games for the Skyhawks to earn the defensive accolades. Jacon-Duffy currently leads the nation in sacks. Overall, he finished the season with 34 solo tackles, 23 assisted tackles, and an average of 5.2 tackles per game. He recorded three sacks in three separate games (Faulkner, Kentucky Christian, Union).

Anderson has garnered all-conference recognition for the second year in a row after earning a spot on the All-MSC second team last season. As a linebacker, he led the team with 80 tackles, 39 solo, 41 assisted and averaged eight tackles per game. He had one sack and had 6.5 tackles for loss yards. He was one of five Skyhawks to record an interception. He finished the season tied in fourth in the conference in tackles per game. In Point’s final game, Anderson recorded 15 tackles, nine of which were solo.

The senior defensive lineman recorded 35 tackles in 10 games played and averaged 3.5 tackles per game. He recorded 2.5 sacks and had a season-high of eight tackles against Union on Oct. 30.

Flesher earned a spot on the All-MSC second team as a punter. The junior finished the season with 65 punts for 2,214 yards. He averaged 34.1 yards per punt and his longest was 63 yards.

The All-MSC Appalachian Division teams are sponsored by Pioneer College Caterers, which is an organization committed to providing the food service needs of Christian colleges and universities.