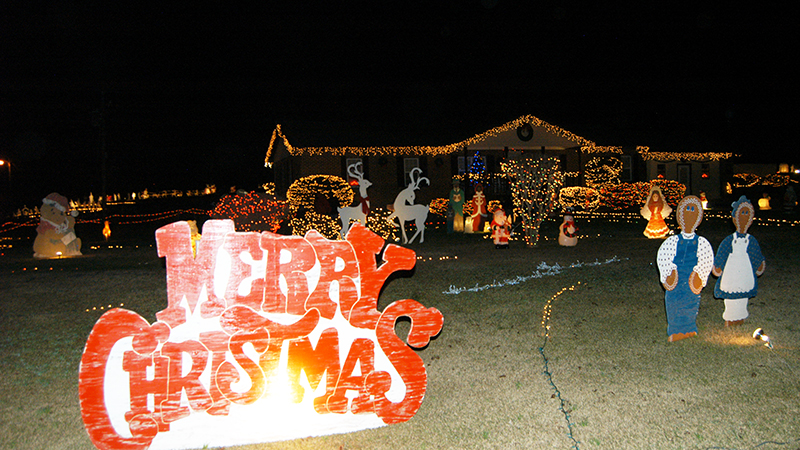 Delightful decor: The Tinsley family is known for their Christmas lights show near the Chambers-Tallapoosa county line. Photo by Wayne Clark.

CAMP HILL — Approximately 300 local residents ranging in age from children to seniors took a cross-county bus ride Wednesday evening to see the Tinsley family Christmas lights show near the Chambers-Tallapoosa county line. They rode in five Dobbs Transportation buses, and everyone had a great time. Mattie Walker, who’s 93, said it was the most fun outing she’d been a part of since coming to the Lanett Senior Center.

The Tinsleys are Chambers County residents and live a little more than a mile from the county line. They are close neighbors living in a complex of three adjacent homes near their original family home. All the yards are lit up in spectacular fashion this time of year and it blends together as one huge display.

A line of Dobbs buses drove around the display and stopped on the second pass around. The passengers got out for some picture taking and met members of the Tinsley family who were gracious hosts.

Patricia Tinsley said the family has been doing this since the 1980s. Each family member had a modest display at the outset, but it got started big-time after a much beloved family member was killed in a car accident.

“In 1989, my nephew Timothy Tinsley was killed out there on that highway,” said Annie Tinsley, the matriarch of the family. “He always loved decorating for Christmas, and we all started adding a little bit more every year in memory of him. Red was his favorite color, and we like to think that all the red you see here honors him. He was only 10 years old when he died, but he lives on in our memory.”

To get the massive display ready to debut on Thanksgiving weekend, the setting up of the individual scenes gets underway in early fall.

Mrs. Tinsley said she thinks about giving it up every year, but she knows that Timothy and her late husband, Foy Tinsley, would want the family to keep the tradition going.

“I can almost hear Foy telling me to keep doing it,” she said.

He passed away seven years ago after having been a leader for years in getting the light display up and running every Christmas season.

Foy’s twin brother, Roy Tinsley, lives in a house behind Annie and is doing his part in keeping up the marvelous lighted scene.

Another tradition they keep going is Sunday dinner. Every Sunday after church, all family members gather in the original Tinsley home for a meal.

One of the more popular attractions in the light show is the singing and dancing Santa Claus on Annie’s front porch. The children absolutely love him.

The bus convoy made a stop at Piggly Wiggly in LaFayette to pick up a group of LaFayette residents who wanted to see the show.

Fifteen participants in the Lanett Senior Center program made the trip aboard one of the Dobbs Transportation buses. They were accompanied by Senior Center Director Sandra Thornton, Mayor Jamie Heard and his wife, Recreation Director Trent McCants and his wife, City Clerk/Treasurer Deborah Gilbert and her family and other city employees.