Seniors get 300 stockings full of goodies 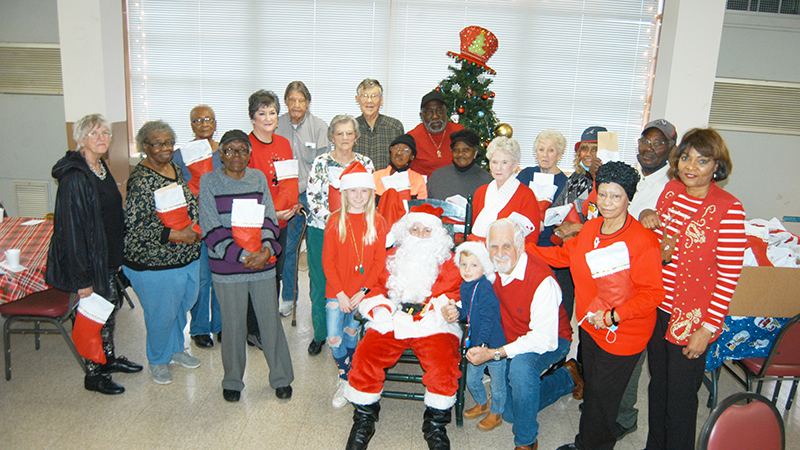 VALLEY — It takes almost a full year of preparation for Ray Edwards’ Christmas Stocking program, but when everything is ready it takes only two days t0 get them all delivered.

A total of 300 large, red and white stockings filled with apples, oranges, candy, a coffee cup and a signed Christmas card were given out on Tuesday and Wednesday this week. They were distributed to participants in the Lanett Senior Center program on Wednesday morning and to the residents at Sylvia Word Manor Tuesday afternoon.

A total of 20 Lanett seniors received a Christmas stocking at the senior center on Tuesday, and 44 more homebound Lanett seniors had them delivered by bus to their home that same day. Close to 30 Valley seniors got their stockings Wednesday morning. A total of 144 homebound Valley seniors has theirs delivered to them by the three city senior buses.

On Monday, Edwards was joined by a group of volunteers to fill the stockings in the back room of Timeless Antiques and Flea Mall. They formed an assembly line and did in an hour-and-a-half what used to take the Edwards family a week to do in their garage. Edwards calls Timeless Antiques owner Carol Fulcomer his guardian angel for coming up with this kind of help.

Edwards’s great-grandchildren delivered each stocking to a senior.  Twelve-year-old Gavin Walden was dressed as Santa and 11-year-old Ady Morgan and five-year-old Ky Yates were elves.

Edwards served for 28 years as a member of the Valley City Council. He’s now the board chairman of the Alabama Department of Senior Services.

“This is one of my favorite days of the year,” Edwards told the Lanett seniors on Tuesday. “My wife, Jackie, and our family has loved doing this for 26 years now. We take care of our seniors in Chambers County. The Alabama Department of Senior Services sees that 46,000 Alabama seniors get a hot meal five days a week. More than seven million meals went to seniors last year.”

“Let’s keep Ray and his family in our prayers,” said Lanett Senior Center Director Sandra Thornton. “We want them coming back next year.”

On Tuesday afternoon, a lively Christmas party took place in the community room at Sylvia Word Manor. Prior to the stockings being given out by Gavin, Ky and Ady, some of the Sylvia Word residents ate lunch while listening to a live performance by the Old Rugged Cross. Steve Baggett sang and played keyboards, Vic Smith was on guitar and Jeff Conway on drums. They sang a mixture of gospel and Christmas songs. Changing one word in Alabama’s “Christmas in Dixie” was very popular with the crowd. The word “Valley” was substituted for “Fort Payne” in the final line.

“They have been very supportive of seniors,” Edwards said.

Edwards said he had tried for 12 years to get a new senior center in Valley when he was on the city council.

“Leonard was able to get it done,” he said. “The new center we have in Valley is a model for the entire state. State officials are always telling people if they want to see a really outstanding senior center go to Valley.”

“We have had our differences in the past, but we’re getting along well now,” Edwards said.

Riley said he will soon be 74 years old and is “a senior looking out for seniors.”

He said the city is in the best financial shape it has ever been in and has lots of projects going on.

“We will soon put together a bid package to pave 38 streets next year,” he said. “We have 15 more to finish this year. There’s more going on in Valley right now than there has ever been. I wouldn’t have it any other way.”

Valley Senior Center Manager Jaclyn Barresi said that on-site participation has been picking up following the Covid-19 shutdown. Anyone who is 60 years of age or older and who lives in Valley can call the Community Center at (334) 756-5290 for details.

Edwards celebrated another successful Christmas stocking campaign by having a fireside chat outside his backyard political museum. He had a fire going in a pit and discussed the issues of the day with Price, Wood and Riley.