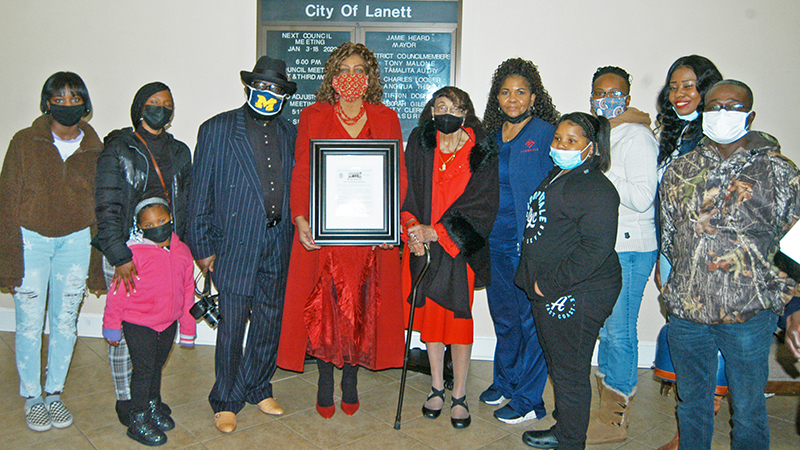 LANETT — On Monday, the Lanett City Council recognized a retired teacher who was celebrating her 95th birthday. Jo Frances Jackson graduated high school at an early age and earned a college degree when she was only 20 years old. She went on to have a career as a classroom teacher for close to five decades.

Lots of family members were there with her to see her recognized by Mayor Jamie Heard and the city council for what she has meant to the field of education.

The mayor’s proclamation reads: “In the year 1927, Jo Frances Fannings (Jackson) was born from the union of Mr. Joseph and Mrs. Bessie Fannings in Lanett Alabama. Mrs. Jackson excelled early in life and graduated from Lanier High School at the age of 13, matriculating to Clark College and Alabama State University where she, at the age of 20, graduated with a B.S. degree in education. She later received a master’s in education and started working toward a doctoral degree.

“Mrs. Jackson, a proud mother of five, had a stellar career as an educator for 49 years. She gave her time and her talents by teaching piano lessons, providing tutoring service and volunteering at Lanier Hospital, to name a few. Be it resolved that with great pleasure the Mayor and Lanett City Council hereby expresses best wishes and congratulations on this 95th birthday to Mrs. Jo Frances Jackson.”

Anyone who knows Mrs. Jackson knows she likes to tell jokes when she meets people she likes. She had three of them on Monday.

Q: What goes up but does not come down?

April, June, September and November each have 30 days, and January, March, May, July, August, October and December each have 31. They all have at least 28; all but one of them have more than that.

Q: What did Benjamin Franklin say about his kite-flying experiment?

A: It was a shocking experience!

“I’d like to live to be 95 and be as active as you,” Mayor Heard told Mrs. Jackson. “I was really impressed to see on Facebook the way you can play the piano.”

Council Member Tamalita Autry said that Mrs. Jackson has attained quite a legacy as an educator.

“You are an amazing citizen, and we are all glad to know you,” she said. “This is a special occasion in Lanett.”

“We thank you, Mrs. Jackson, for being here with us this evening,” said Council Member Tony Malone. “We wish you a happy birthday.”