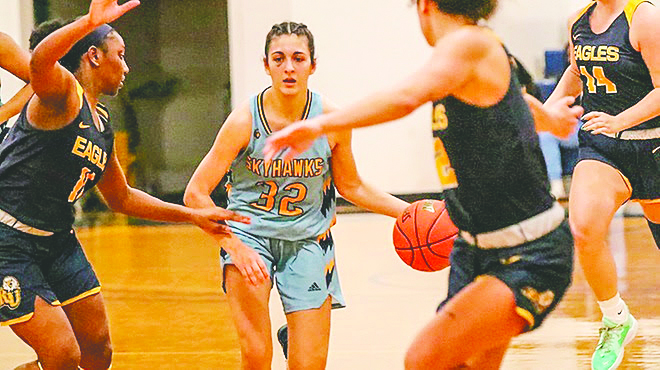 The Point women’s basketball team was led by Marta Gimenez, who made three 3-pointers in a win over Union Saturday. Photo contributed.

The Skyhawks were initially scheduled to host Union College on Saturday, but due to COVID-19 protocols within the Union program, Point traveled to Montreat for the second half of its AAC series matchup with the Cavaliers. Point was originally scheduled to play Montreat on Tuesday, Feb. 1.

Ray Reeves connected for the first four points of the game, earning Point the lead, which the Skyhawks would hold onto for the rest of the contest. Montreat cut Point’s lead in half 4-2, but Point answered with a 15-2 run to jump ahead 19-4. The Skyhawks took its largest lead of the half at 21-points, following a layup from Jake Smith with 5:27 left and Point led 46-27 at the break.

In the second half, Point extended its lead out to 34 points following a layup from Corey Bowen (65-31), and the Cavs were unable to perform a comeback.

Jake Smith led the Skyhawks with a triple-double as he recorded a game-high 21 points, adding on 12 rebounds and 12 assists. Smith also finished with two steals and four blocks. Smith’s triple-double is the first since Jamon Moore recorded one in 2018. Bowen recorded a double-double with 19 points and 10 rebounds, the 18th double-double of his career.

Union held a demanding 14-point lead early in the second quarter, but a layup from Destinee Ellison would spark a 16-5 run for Point to close out the first half. Union led 32-29 at the break.

Point’s run continued into the third quarter with a layup from Gimenez followed by a jump shot from Jasmine Griggs, earning Point the lead (33-32). Union scored the next seven points to regain a six-point lead, but Nicole Izuagie would tie the score at 39 with a layup followed by a 3-pointer. With 1:39 left in the quarter, Union’s Madison Taylor would connect for a 3-pointer to put the Bulldogs ahead 44-41, but back-to-back layups from Iyanna McMillan and Gimenez would put Point ahead 45-44 entering the final frame.

With less than eight minutes remaining, Gimenez connected for back-to-back triples and Sheyvonne Owens followed with a layup to send the Skyhawks ahead by six (55-49).

A 3-pointer from Union’s Brooke Hammond would bring Point’s lead within one with 4:44 remaining, but the Skyhawks answered with an 8-0 run to go ahead 65-56 and go on to victory.

Gimenez had a game-high, alongside Union’s Hammond, of 23 points as she was 8-for-16 from the field and 3-for-6 from perimeter shooting. Izuagie followed with 16 points and McMillan rounded out the Skyhawks in double figures with 14 points. Under the basket, Owens led Point with eight rebounds, Gimenez followed with six, and McMillan, Griggs, and Ellison recorded four boards apiece. Griggs and Ellison led with four assists each, and Griggs recorded a game-high of five steals.

Hammond led the Bulldogs with 23 points and 12 rebounds.

The Skyhawks return to action Wednesday, Jan. 26, as they travel to Reinhardt for an Appalachian Athletic Conference matchup at 5:30 p.m.