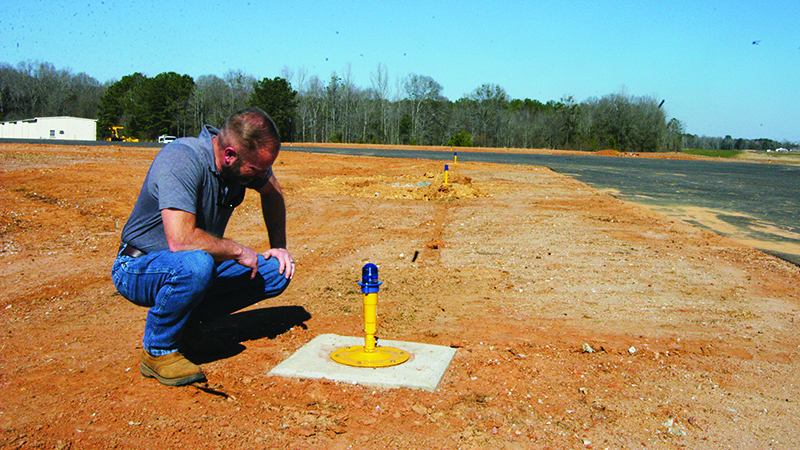 Runway lights installed: Interim Airport Manager Jody Lowery takes an up-close look at one of the new runway lights that have been installed at the Lanett airport. They are on both sides of the 5,400-foot runway and on both sides of the taxiway. It is LED-type lighting, which is brighter and less expensive than conventional lighting. The airport could be ready for reopening by late March. Photo by Wayne Clark.

LANETT — The Lanett airport is getting closer to reopening. The runway lights have been installed, and striping will soon be taking place on the southwest end of the new 5,400-foot runway.

“With good weather and if everything keeps going the way it has recently, we could reopen by late March,” Jody Lowery, the interim airport manager, told The Valley Times-News.

More than 100 runway lights now line both sides of the runway and the taxiway. Alabama Power will need to set a power pole and connect it to the vault where the light controls are. The lights can be turned on by pilots who are coming in for a landing. He or she can key a mike to light them up.

The striping on the southwest end will be very similar to what’s already in place on the northeast side. There’s a 40-foot-tall number 24 on that side. A number 6 of the same size will be going in on the southwest side. Landing pilots will know what those numbers mean.

“I would say we are 99 percent through with the shoulder work on the runway and taxiway,” Lowery said. “There’s very little left to do. We will still have to dress up and grass the diversion channel on the southwest side. There’s still some trees that need to be taken out on the northeast side.”

The old airport closed in November 2017. An estimated $20 million in construction work has taken place since then. The old runway was approximately 3,165 feet in length. The new one will be more than 5,400 feet in length. “That’s long enough to land any business jet,” Lowery said. “I’ve been told that it will be long enough to land a C-130 cargo plane if one ever had to land here.”

Having a regional airport in Lanett will be a big advantage for local companies like Kia and its suppliers, West Frazier, Knauf, WestRock and John Soules Foods. It will be possible, for example, for auto parts to be flown from Korea to Atlanta and then placed on a smaller jet that can land in Lanett, a short drive away from where they are needed.

For the Lanett airport to reach its potential, the next key step will be to prepare sites for hangars tenants want to build. There’s also a need for a new road to access the site from Phillips Road near the Hampton Inn.

The city stands to gain revenue from leasing the hangar space and on the sale of aviation fuel. There’s already a large hangar on the site. Planes were being stored there before the old airport was closed for construction. New asphalt will soon be going down in front of it, and it will reopen. It’s on the north side of the new airport terminal. The new terminals going in will be on the south side of the terminal and will be for jet planes.

“We will lease the ground where the hangars will sit,” Lowery said. “The tenant will build the hangar and maintain it. We will need to prepare the sites and have pads ready for infrastructure to go in.”

“I am getting calls every week on this,” he said. “Most of the hangars people want to build will hold multiple planes.”

Lanett is in a great location for business-class travel. The runway at the Auburn airport, for example, is less than a mile long and can’t be extended.

“Any corporate jet will be able to land here,” Lowery said. “I have been involved in this project for three-and-a-half years now. It has gone pretty smooth up to this point. I think there’s a great future here once we are leasing hangar space and selling aviation and jet fuel.”