Point University president reflects on past, present and future 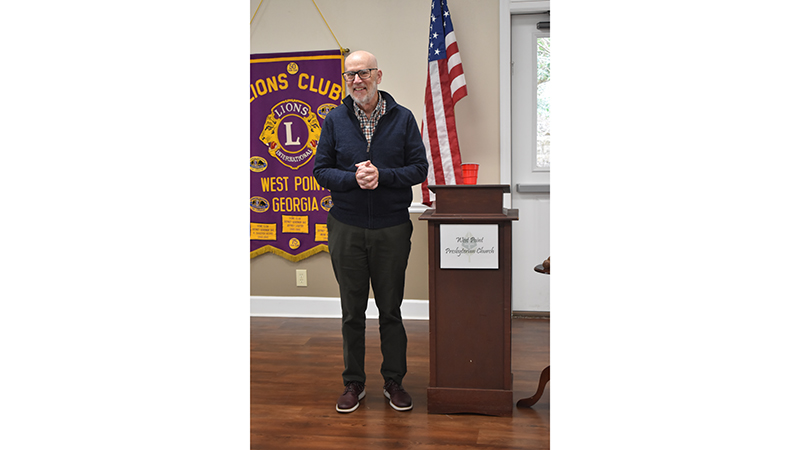 Point University president: Point University President Dean Collins talks to the West Point Lions Club about the history of Point and where the school hopes to be in the future. Photo by Wayne Clark.

The guest speaker at the West Point Lions Club’s meeting on Wednesday at West Point Presbyterian Church was Dean Collins, the president of Point University. Collins talked about his past and present experiences with the university, as well as its plans for the future.

“I can’t remember everybody’s name, but I remember everybody’s face because when you live in a small town, you get used to seeing each other, and that’s a good thing,” he said. “So, thank you for your support of Point University all these years. And it’s hard to believe that it’s been 16 years that I started as an interim. I served three years as an interim, reluctantly, because I didn’t want to do this job. But the Lord has a way of getting your attention when he has a job for you.”

Collins said there were aspects of his experiences with Point University that made him think God wanted him to be in West Point, whereas he’s also faced significant challenges within the past 10 years.

“One of the things that is confirming to me is that as we were making this selection, you know, my relationship with Smith Lanier was decades-long, and he and I talked and prayed and visited behind the scenes about all this for a long time before this happened,” he said. “And I was telling one of his grandsons just about three, four weeks ago about this because the grandson had made a contribution to Point.”

Collins said he found the contribution touching and thought Lanier would be proud of his grandson.

“And I said, ‘The thing about Smith that I hope I’ve learned, I’m trying to learn, is that he was all about serving wherever he was and serving multiple communities. He was the CEO of a pretty good-sized and successful company, and he was on the board of all those startup companies. And he was on a lot of boards, public but also private and also nonprofit.”

Lanier was often called on for help with settling disputes, helping organizations get along or helping people solve problems, Collins said. Collins said he felt that Lanier had been training him for his later success.

“I’m the chairman this year for the Center for Strategic Planning for the county and the three cities,” he said. “I’m the chairman of the Georgia Independent College Association this year. And more and more and more, I find my voice being asked for quietly. And I’m not saying any of this to brag; I’m saying this is evidence to me that we were supposed to be here, and all that time I had spent with Smith was him preparing me for something that neither he nor I could see or imagine. And I’m grateful for him and his role in my life. But I’m grateful that hopefully not just me, but our entire university is catching that spirit.”

Collins said that most of the challenges Point University has faced have to do with the education industry in general. One challenge is that more people are questioning the value of education. He said that virtual education technology has also created problems for smaller universities. Additionally, he said there was a declining number of high school students graduating due to declining birth rates.

Of course, the COVID-19 pandemic affected most, if not all schools.

“When the pandemic started, we, like most every other institution, we pivoted to online, and everybody went home,” he said. “And it was scary because you didn’t know whether they were going to come back.”

He said that job and income disruptions caused by the pandemic made parents question whether they could afford to send their kids to college. Additionally, he said some might be more afraid of the virus than others.

“This is the first week this year that we’ve had zero COVID and zero quarantine,” he said.

Collins said the university has no plans to build a rumored dorm.

One reason for this, he said, was declining enrollment numbers.

“Are we going to build a dorm?” he said. “Yes and no. So, we personally aren’t planning to build. We are building by using private entities who have an interest in working with us to build, and then we do leasebacks.

“This past year  we partnered with Coleman Reeves, who bought the Refuge Point Church,” he said. “And he gutted it and built a [dorm] … I think it holds up to 52 students.”

Collins said Point University is planning on having one or two small dormitories created before the next school year.

“So, I think Coleman presented to the city council last night,” he said. “I haven’t talked to him yet today to hear all the results. But we were seeking approval on one that is very close to where I’m standing right here that we already own that could be remodeled into a dormitory. And then we’re working on a potential other location in the downtown area that he’s got a little bit more drawings to do before we could present and get approval.”

Collins brought up online education. He said Point University is trying to partner directly with businesses that it believes would value its education. One business the university is partnered with is Chick-fil-A.

“And so we provide online degrees and have about 100 Chick-fil-A operators from around the country that are now marketing Point’s online education program to their employees,” he said.

“So we think if we can get some volume there, that creates financial stability that then gives us more flexibility to think about how to make changes or improvements in the main campus,” he said.